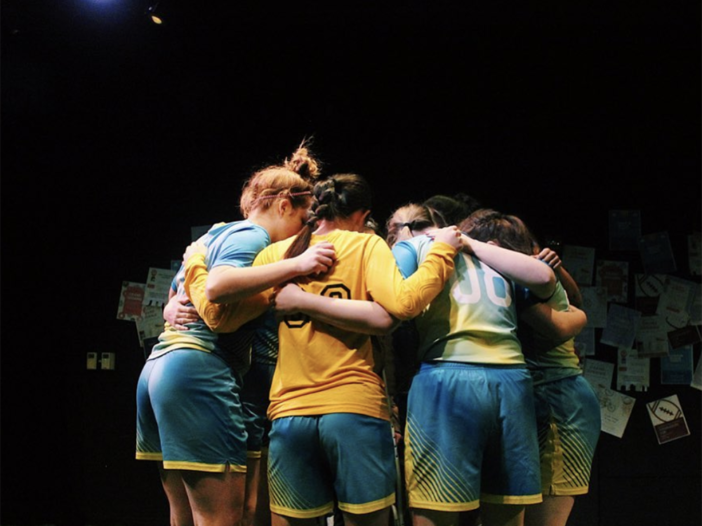 “The Wolves,” presented by the Nomadic Theatre in collaboration with Black Theatre Ensemble, is a 90-minute performance depicting a story of teamwork and self-discovery. Set in an indoor soccer stadium, the production depicts nine teenage girls’ journeys towards individuality and success despite the struggles of adolescence and provides a fulfilling experience for all viewers.

The play,  running until Feb. 1, is directed by Jenni Loo (SFS ‘21) and produced by Raphy Hupez (SFS ‘21) and features a 10 person cast.  Nine of the cast members serve as teammates on the youth soccer team, while the tenth cast member is the Soccer Mom, who appears only in the last scene. The show also includes an extensive coaching and production staff, with students of all Georgetown schools and classes, as well as two cocurricular advisors who oversaw the production. The production team has worked diligently on the show since April 2019 in order to produce this well-executed depiction of Sarah DeLappe’s 2016 play.

Nomadic Theatre has encouraged contemporary, technically innovative and socially charged productions to the Georgetown campus for 38 years. “The Wolves” is their second of three productions during the 2019-2020 academic year and fulfills their mission of encouraging actors to embrace challenge. This production team brings a relatable story, rich in symbolism and creativity, to the stage of the Village C Theatre.

The show highlights the balance between the importance of originality and the power of being supported by a group. The nine member soccer team, appropriately named “The Wolves,” function as a cohesive unit of warriors despite the continuous stream of battles they face. The girls must overcome their internal conflicts while simultaneously discovering themselves during times of criticism and rejection.

While the plot of the show focuses on the power of teamwork and self-discovery in the face of difficulty, the grand message of the production is more focused on the individual aspect of the growth undergone by the teammates, according to cast member Grace Hermes (COL ‘22).

“The biggest message that I’ve taken away is reinforcing inclusivity,”  Hermes said in an interview with The Hoya. “Everyone has a cool story and just listen to people.”

The production opens with an uncomfortable dialogue riddled with judgment as the girls explore their teammates’ living situations and relationship history. As the girls repeatedly practice and compete together, they become more accepting and supportive of each other’s differences and difficulties. Through their disagreements, the team grows closer together, allowing them a greater bond when tragedy strikes in the play.

In their darkest times, the team comes together to play one final game, encapsulating the spirit of unity evolved throughout the play. Each girl’s imperfections are appreciated as they form their strongest friendships. The Wolves become an unbreakable group of powerful young women, equipped to handle anything as a team.

The play served to use all elements of developing relationships: humor, heartbreak, joy, sorrow, acceptance and growth to strengthen bonds. In spite of misfortune, arguments and cultural differences, the girls remind the audience of the importance of life lessons, according to cast member Joy Kim (COL ‘21).

“At first glance, everything seems pretty shallow,” Kim said in response to her greatest takeaway from the production. “It’s pretty much like girls talking, but in the little things, there’s a lot of deep, larger life themes.”

The Wolves’ spirit and vigor was evident throughout the entire production. Their fiery, cohesive spirit amplified the theatrical production to a level of empath distinct in a production. “The Wolves” tackles complex issues of individuality within a team that are hard to discuss in college settings. The production is necessary to raise awareness to these difficult topics and facilitate uncomfortable conversations.

“The Wolves” is a thoughtful and provocative production, highlighted by the inspiring execution by the Nomadic Theatre cast. The show activates a spectrum of emotions that leaves viewers feeling fulfilled, inspired and contemplative.