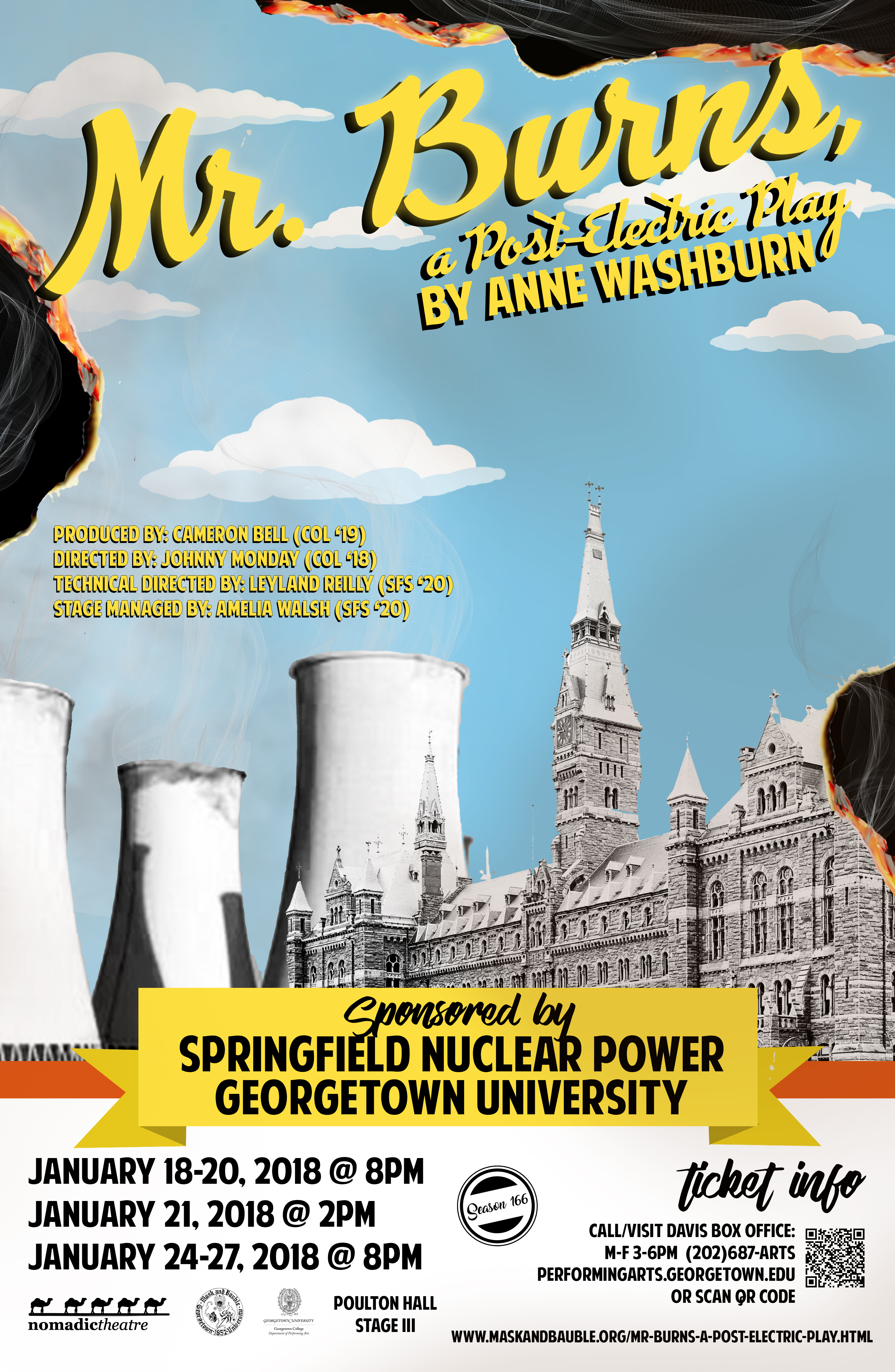 A post-apocalyptic society without television or electricity is the backdrop for an unnerving examination of entertainment itself in “Mr. Burns, a Post-Electric Play,” a joint production by student theater groups Mask and Bauble Dramatic Society and Nomadic Theatre.

Set in a dystopian future in which people grasp for a semblance of normalcy, much of the play’s plot revolves around the attempts of the main characters to recreate television shows by stringing them together from memory.

“The Simpsons” is the most frequently referenced television show throughout the performance. Creepy, yet intriguing, Simpsons costumes keep the audience on edge throughout all three acts.

During the first act, Matt, played by Mac Riga (COL ’21) describes a Simpsons episode, trying to piece together various quotes he can remember. As other characters arrive, they collaborate to form full episodes.

Despite the humorous content of the performers’ conversations, the underlying situation is heart-wrenching. The characters have lost their families and cope with the tragedy by recreating comedic moments from television shows they can no longer watch.

The second act features the same characters in the business of performing television shows in exchange for resources, while the third act is the most intense. A musical that takes place entirely in Simpsons costumes, act three is a complete shift from the hilarious — seriously, fall-out-of-your-seat-laughing hilarious — musical number of act two. Instead of relying on humor, act three is unnerving and heavy.

Wearing eerie Simpsons masks, the characters test the audience’s limits. If viewers are wary of the length of the play, they must persevere to the final act. The third act is unnerving and confusing, but it calls back themes from the first two acts and rounds out the entire production.

Because of the length and ambition of the product, the development of the performance was complicated, according to director Johnny Monday (COL ’18.)

“It’s a big play. It would be easier if it was just a play or a musical. It’s a mixture of both,” said Monday.

The cast and production crew succeed in creating an interesting and engaging experience.

“Mr. Burns” has something for everyone: Those who are not impressed by its cultural references or pop music remixes will enjoy how the play challenges the audience, prompting them to think about human nature in a different way. Audience members can choose to engage with “Mr. Burns” on a deeper level or just sit back and enjoy the characters’ banter.