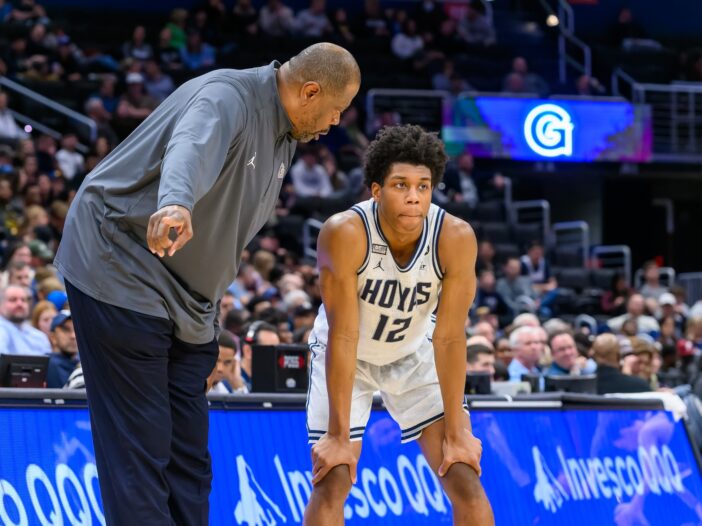 “Patrick’s commitment to Georgetown and to further animating our legacy of excellence is inspiring,” DeGioia wrote in a press release. “His experience as a coach over the last 15 years with some of the best basketball minds in the country has prepared him to lead our program.”

But Georgetown leadership did not just hope he would bring his experience in the front office to the Hoyas. They were banking on his success as a player — both in college, as a member of Georgetown’s 1984 NCAA men’s basketball championship team, and the NBA — to translate into success as a coach. DeGioia, the Georgetown administration and fans of the Hoyas all hoped the most accomplished player in the program’s history would usher in another era of dominance.

Ewing was aware that all eyes were set on him upon his return.

“As successful as I was as a player, that’s how successful I want to be as a coach,” Ewing said ahead of his debut season in 2017.

Six years after returning to the Hilltop, Ewing has fallen short of his lofty goals.

Georgetown has not won a regular-season Big East game since March 2, 2021, setting an all-time conference record for most consecutive losses (27). As of Jan. 20, they are 0-8 in conference play, dragging Ewing’s conference record as a head coach to 26-71. Although the Hoyas won the Big East Tournament championship in 2021, their postseason run ended in a 73-96 thrashing by the University of Colorado in the first round of the NCAA Tournament.

In 2017, Georgetown pitched Ewing’s hiring as a means of reviving a failing program. However, the university hasn’t sparked a revival of any kind. Instead, it has remained unwaveringly tethered to its decades-old brand: Patrick Ewing, Chief of Staff Ronny Thompson (CAS ’92) and an attempted emulation of 1980s Hoyas basketball.

For students like Ryan Knapick (SFS ’24), the historic losing streak and lack of institutional change could spell the end of his fandom.

“We need to move on. There needs to be a new coach,” Knapick said in an interview with The Hoya. “It’s hard to care about a team that goes out and loses every game. The feel on campus is pretty poor. Everyone is waiting for a new start.”

As clamors for change mount and the university remains resistant to the voices of fans and analysts alike, a number of key catastrophes have defined Ewing’s tenure as head coach.

The Failures of Georgetown Basketball

Georgetown has turned into one of the worst second-half teams in Division I basketball. On Jan. 4, Georgetown was tied with the Villanova Wildcats 35-35 at halftime. They ended up losing 57-73. Three days later, it was more of the same. After heading into the half leading the Marquette Golden Eagles 36-34, the Hoyas ultimately suffered a 22-point beatdown.

One of Ewing’s blunders that has been exposed in the second half is his shallow rotation. When Georgetown blew a double-digit halftime lead in its Nov. 23, 2022 loss to American University, sophomore guard Primo Spears, who averages the seventh-most minutes per game in Division I college basketball, logged 37 minutes. Meanwhile, first-year point guard Denver Anglin saw the floor for only three minutes.

Moreover, in the Ewing and Ronny Thompson era, Georgetown has suffered from logistical failures. The program is plagued by a lack of transparency, ranging from confusion around Ewing’s contract to dismissals and transfers without acknowledgement or explanation.

In February 2022, Jon Rothstein of FanDuel reported that Ewing received a contract extension following the Hoyas’ Big East title in 2021. Georgetown, however, has not released any official information regarding an extension or the size and length of Ewing’s current contract. While Ewing’s initial contract paid him a salary of $2.6 million per year through the 2022-23 season, an extension may further disrupt Georgetown’s plans for his potential exit.

The issues extend to his players, too. In the 2021-22 season, junior forward Tre King, an incoming transfer, was dismissed from the program for not meeting the university’s expectations on conduct. Georgetown never expanded on what these violations were. Before he could log a single minute for the Hoyas, King transferred to Iowa State, where he now averages 16 minutes per game for the No. 14 Cyclones.

When asked for a statement about his dismissal, Iowa State Athletics told The Hoya that King has no comment on the situation.

The university also failed to announce the departure of junior guard Dante Harris, the Big East Most Outstanding Player of the Tournament in 2021. Harris left the Hilltop on Dec. 18, 2022, to join the bench at the University of Virginia (UVA) for the rest of the season because of NCAA rules on midseason transfers. Georgetown’s program is yet to issue so much as a press release for the player who led the Hoyas to their most successful season under Ewing.

After transferring to UVA, Harris was not shy about blasting the culture at Georgetown either. Less than a month after announcing his move, Harris reposted a pointed tweet by Caroline Darney, the managing editor at USA Today’s BetFTW.

“Dante Harris looks like he’s having so much fun already,” Darney wrote in the tweet. “I can’t imagine the vibe switch he’s experienced.”

Georgetown Athletics did not respond to The Hoya’s repeated requests for comment about Harris’ transfer. Additionally, UVA Athletics informed The Hoya that Harris declined to comment on the situation.

The team has struggled to build a sustainable program without returning starters. Every year, Georgetown turns to Ewing to build a competitive team out of a roster of brand new players, only to lose a lot of them the next year and restart the process.

Because of Ewing’s ability to bring in a strong roster of players each season, some fans have remained loyal to him. Ella Davie (SFS ’25) said that without Ewing, Georgetown would be unable to attract the quality of top transfer talent it has seen under him.

“Despite the fact that we’re not winning games, he did convince a lot of good transfer portal players to come here, and that’s really useful,” Davie said in an interview with The Hoya. “I do give him some credit for that.”

In addition to recruiting Aminu Mohammed, a five-star guard, in 2020, Georgetown boasted the fourth-best transfer class in the country in 2022. The Hoyas have already picked up a four-star guard for 2023 in Marvel Allen, beating out LSU, Texas A&M, Arizona State, Kansas and Michigan to land the recruit.

However, five of Georgetown’s seven transfers from this class were three-star recruits. Multiple schools ranked below the Hoyas had a higher average transfer class rating than Georgetown, but Georgetown’s higher number of incoming players boosted their ranking above those schools.

Moreover, highly-ranked transfer classes are less impressive when they’re needed every year. Under Ewing, Georgetown has been a revolving door for its players, replacing transfers with transfers.

The poor results on the court and the ineptitude off the court has led to a significant decline in interest from the Georgetown fan base, but there wasn’t always this level of disinterest in the formerly coveted program.

Omar Kanjwal (SFS ’17), who runs a fan account for the Hoyas on Twitter, said the difference in fan engagement between now and his time at the university is marked.

“There was a lot of interest in the basketball team. There was a craze for it,” Kanjwal said in an interview with The Hoya. “Now, Georgetown loses to American for the first time in decades, and did anyone really care? It’s not even something that picks up on people’s radars anymore. That’s the bar. That’s the standard they’ve set.”

After years of growing apathy about the team’s performance, Kanjwal said his following of Georgetown men’s basketball hinges on whether the university fires Ewing.

“If they don’t move on from Coach Ewing, I’m probably done with Georgetown basketball for the foreseeable future,” Kanjwal said. “There’s no faith in his ability to turn things around. There’s zero precedent in college basketball to suggest he can do something like that.”

Thomas Panchley (MSB ’24), a dedicated fan of the men’s basketball team, said his attendance at future Georgetown basketball games will depend on whether Ewing is replaced.

“I’ve been a season ticket holder the last two years,” Panchley said in an interview with The Hoya. “If they don’t fire him by the end of this season, there’s no chance I’m getting season tickets next year.”

Despite all the problems that plague the Georgetown men’s basketball program, fans and analysts say Georgetown keeps Ewing and Ronny Thompson around, primarily because they are the two people in the organization most connected to the legacy of John Thompson Jr. If the university moves on from them, it will face a tough trade-off between building a modern winning program and honoring the greatest coach in Georgetown history.

That coach, John Thompson Jr., made sports history as the first Black coach to win an NCAA basketball title. Under the three-time Big East Coach of the Year’s leadership, the Hoyas had a 596-239 overall record with a streak of 24 postseason appearances in the NCAA or NIT tournaments. John Thompson Jr. also sent 26 of his players to the NBA draft and had two of them, Ewing and Allen Iverson, selected as the No. 1 overall pick. Since 1999, he has been forever enshrined as an inductee of the Basketball Hall of Fame.

At Georgetown, John Thompson Jr. is honored with a tall bronze sculpture at the entrance of the John R. Thompson Jr. Intercollegiate Athletic Center.

Though it is important for Georgetown to remain connected to the legacy of John Thompson Jr. in its purpose and passion, it is clear that the Ewing experiment is not working, according to John Gasaway, an ESPN college basketball writer and author.

“Georgetown is right to put him on a pedestal at every opportunity, and as far as the people connected to him, keeping them involved in the program,” Gasaway said in an interview with The Hoya. “This hasn’t played out the way Ewing, among other people, would have wanted it. Now, the discussion has to be, ‘Where do we go from here?’”

After repeated requests for comment from Ewing about his future with the Hoyas, a Georgetown University spokesperson directed The Hoya to a statement made by Director of Athletics Lee Reed on Jan. 4.

“We recognize this is a challenging and frustrating time for the men’s basketball team and our fans,” Reed wrote in the statement. “Coach Ewing understands that it is imperative to get the program back on track and no one is more committed than he is to making that happen.”

However, the resounding answer, from fans and analysts alike, involves finding a new leader in the locker room. If Ewing and Ronny Thompson exit, it will end five decades of connections to John Thompson Jr. and usher in a new era for the Hoyas.

As Georgetown is one of the most storied programs in college basketball, Gasaway said the Hoyas should not struggle to find a suitable replacement.

“It would be easy to say that Georgetown is not such a good job anymore. But it’s a Big East program. The Hoyas will not lack for quality candidates when it does come to that,” Gasaway said.

Regardless of who replaces Ewing, the change will be welcome for a program suffering from the longest regular-season conference losing streak in Big East history. Ewing’s tenure has sunk Georgetown to depths no other team in the conference has ever fallen, a far cry from the sentiments expressed during his introductory press conference nearly six years ago.

That day, Ewing was aware there would be an ultimatum for his time at Georgetown.

“Success is winning,” Ewing said during the press conference. “If I don’t win, there will be another coach here sooner or later.”

In 689 days, Ewing has not won a conference game. And it looks like there will be another coach on the Hilltop sooner rather than later.