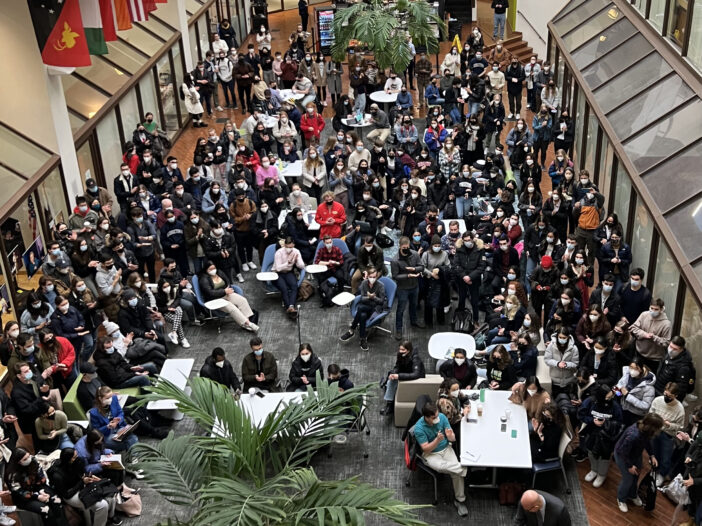 CW: This article discusses mass violence in Ukraine. Please refer to the end of the article for on- and off-campus resources.

The sound of bombs abruptly woke up Katya Sedova’s (GRD ’18) family early Feb. 24 in Kyiv, signalling the start of Russia’s invasion of Ukraine, which had been looming for weeks.

“I’m here before you because my family is still in Ukraine. They indicated they awoke today to the sirens and sounds of air raids, something that Kyiv and many cities in Ukraine have not heard since World War II,” Sedova said at a town hall event Feb. 24. “That experience alone is surreal.”

Sedova, who is from Ukraine, spoke about her family’s experience and the current crisis facing Ukraine at the event hosted by Georgetown University’s Walsh School of Foreign Service (SFS).

The Russian military invaded Ukraine, storming the Eastern European country by air, land and sea. The invasion followed years of rising Russian pressure and recent weeks of escalating Russian militarization along its border with Ukraine. Leaders around the world have condemned the invasion, which is rooted in Russia’s history of imperialism.

“I want you to understand to what extent Ukrainians will resist. It’s not a hashtag. It is a reality for every Ukrainian, wherever they are in the world,” Sedova said. “Their struggle for sovereignty — for independence — goes back centuries. It is not just an idea. It is something they live and breathe and internalize.”

The SFS organized the event to show solidarity with Ukraine’s people, Hellman said.

Kupchan, whose parents are from Ukraine, but no longer live there, believes Russia will take over Ukraine within days.

“I’m guessing that we will see the Russians in the city center in a few days. And that’s because the Ukrainian military, despite the fighting spirit, is no match for one of the best armies in the world,” Kupchan said at the event. “By suppressing the country’s defenses, there’s effectively clearing the way for a set of tanks and armored columns to come in.”

The United States must continue to focus on it’s own democratic domestic challenges before getting intertwined with Russia and Ukraine, Kupchan said.

“One of the things I’m most worried about, is that we’re going to be preoccupied with this problem when in some ways the much bigger threat to us as a country is right here at home, solving our domestic problems, getting our political central back to life,” Kupchan said.  “I hope that the preoccupation in Russia does not distract us from that very important domestic agenda.”

In a pretext to the invasion, Russian President Valdimir Putin spun a conspiracy theory that Ukraine was on a path to nuclear power in an address aired to Russian people on Feb. 21. 00

Talmadge is particularly alarmed by Putin’s discourse on nuclear weapons.

The invasion, however, may backfire due to unpopular support for the move among the Russian people, Talmadge said.

“It absolutely could be devastating for Putin politically. We’re already seeing evidence of what to me was surprising in terms of Russian domestic protests against this military operation,” Talmadge said.

As they have in the past Ukranians will persevere, Sedova said.