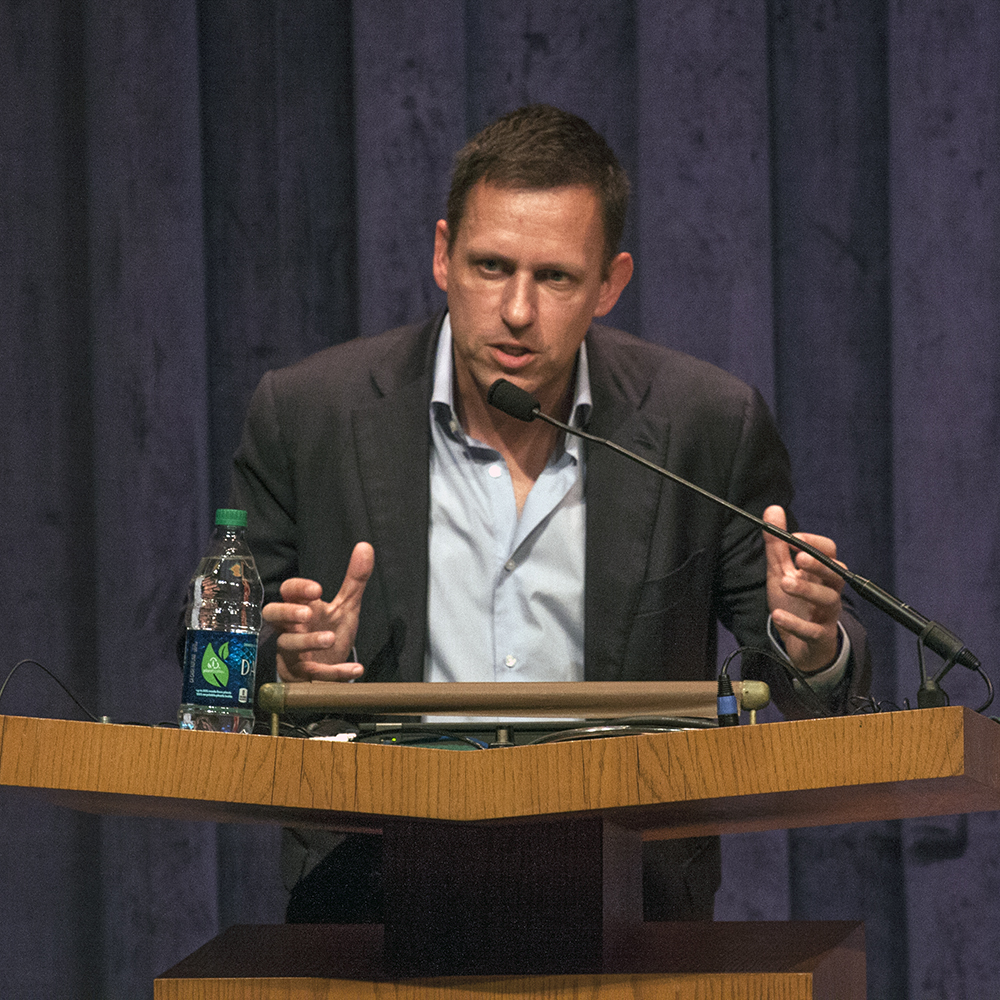 The event, which was entitled “Developing the Developed World,” consisted of a lecture by Thiel and a question-and-answer session. The lecture was co-sponsored by the Lecture Fund, the Georgetown Entrepreneurship Initiative, Venture Capitol and Georgetown Young Americans for Liberty.

Thiel, who has an estimated net worth of $2.2 billion, is the co-founder of PayPal and Palantir Technologies, in addition to serving as the president of Clarium Capital, a global hedge fund.

Thiel, who serves on Facebook’s board of directors, made the first outside investment in Facebook in 2004 and also funded companies like SpaceX and LinkedIn. He is a managing partner in Founders Fund, a venture capital fund with $2 billion in assets.

Thiel’s lecture drew from the themes of his bestselling book, “Zero to One: Notes on Startups, or How to Build the Future.” Complimentary copies of the book were given to the first 300 attendees.

Thiel began his speech by saying that there is no formula for success, and that success in technology is difficult to recreate.

“The next Mark Zuckerberg will not be starting a social networking site. The next Larry Page will not start a search engine. The next Bill Gates will not start an operating system company,” Thiel said. “If you are imitating these people, then in some sense you’re not learning from them at all.”

Thiel repeatedly stressed how important it is for aspiring entrepreneurs to come up with original ideas that nobody else is pursuing.

He urged innovators to ask themselves, “What great company has nobody started?” He said that the most difficult question he poses in interviews is, “Tell me something that is true, that very few people agree with you on.”

Thiel said that while everyone has answers to these questions, social pressures make it uncomfortable for people to allow their ideas to grow.

“We live in a world in which courage is in much shorter supply than genius,” Thiel said.

Drawing from his years of business experience, Thiel said that founders and investors should seek to create a unique product in order to achieve a high market share.

Using the example of Google’s monopoly over online search engines, Thiel said that the idea of competition in business is overrated.

Thiel said that he dislikes answering questions about the direction of technology, and that trends and buzzwords are overrated.

“If you hear the words ‘big data’ or ‘cloud computing’, you need to run away,” Thiel said. “The buzzwords are a tell that [the company is] bluffing, and that there’s nothing that’s actually differentiated.”

Thiel said that his own life story taught him that endless competition does not lead directly to success.

Raised in Northern California, Thiel said that he was “super tracked” from a young age. He received his undergraduate degree in philosophy from Stanford University in 1989 and went on to graduate from Stanford Law School three years later.

After Stanford, Thiel began to work at a Manhattan law firm and said that he found the experience to be overwhelming.

He quit after seven months and went on to found PayPal in 1998.

Thiel also said that a college education is not necessary in achieving business success, as the social pressure of attending university may deter opportunities away from aspiring entrepreneurs.

“It’s seen as the all-important be-all and end-all, where your life culminates in your eighteenth year when you find out what college you get into,” Thiel said. “We have over a trillion dollars in student debt and that forces us to have some very difficult questions about the nature of the good that is education.”

In 2010, Thiel created a highly competitive fellowship that offers $100,000 to students under 20 who drop out of school to pursue scientific research, create a startup or work on a social movement. Madison Maxey, a Thiel Fellow and founder of The Crated, spoke at the OWN IT conference Saturday.

Thiel finished his speech by saying that despite popular belief, there is not enough technological innovation today.

“[Today’s society is] dominated by intense hostility to all things scientific and technological,” Thiel said.

Benjamin Forestier (MSB ’16) said that Thiel articulated his own feelings towards the McDonough School of Business at Georgetown.

“I’m a business student here and I came in with a lot of dreams,” Forestier said. “I was kind of disillusioned by the program and I think [Thiel] put into words everything I feel but was unable to express.”

Kevin Brosnan (COL ‘16), co-founder and editor-in-chief of Venture Capitol, an online publication that covers entrepreneurship and startup culture in and around the Georgetown community, said that Thiel’s lecture touched on the most important issues facing entrepreneurs today.

“Whether you’re talking about entrepreneurs or investors, asking the contrarian question and asking what people aren’t doing is really good advice. I like that he touched upon that in his book and really highlighted it throughout his speech,” Brosnan said.