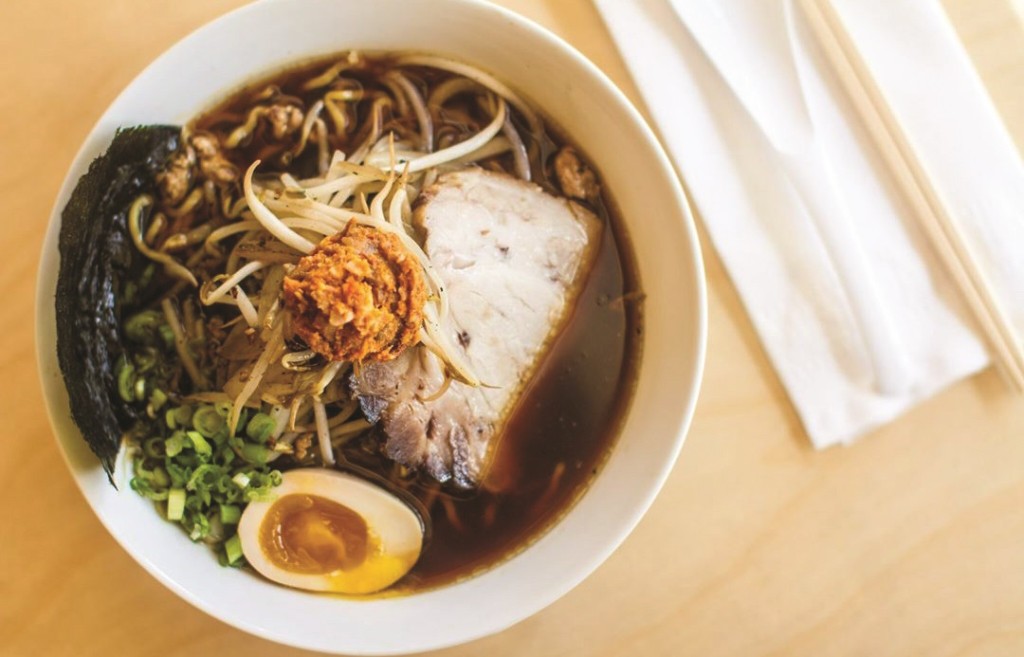 Rivaling the forceful brutalistic architecture of Lauinger Library, the Atlantic Plumbing building in North End Shaw has been housing a colorful new Japanese eatery, Haikan, for three months. The 49-seat restaurant, which opened in August, is the latest product of the owners of popular ramen eatery Daikaya and Japanese fried chicken joint Bantam King.

Like its sister establishment, Haikan primarily serves ramen. It packs around 50 customers into its bar, booths and tables on a first-come-first-serve basis and does not accept reservations. In mild weather, the storefront opens its garage-like doors, allowing another 30 customers to sit at an outdoor bar.

Amid servers carefully carrying arranged appetizers and generous bowls of ramen across the crowded floor, the dining room bustles with conversation and upbeat, bass-heavy music, which the red plaster and exposed concrete walls do not sufficiently muffle. The color-blocked ceiling’s pattern of plywood triangles contributes to the vibrant design.

What sets Haikan apart from its two predecessors are its kozara, or small plates. The menu offers seven distinctive options including mussels, deviled eggs and salad, along with daily specials.

The crab rangoons ($7) are served on a folded piece of Japanese newsprint. The crunch of the freshly fried shell contrasts with the thick, slightly sweet cream cheese filling, which would require a more distinct crab flavor. Kaki-Kaki oysters ($5.50), a daily special, are served on the half shell on a bed of seaweed. Each oyster is artfully topped with a dollop sweet puree, green shoots and a piece of dried fruit. The light citrus flavor is an unexpected foil to the briny bite of the meat, and the combination of the two creates a bright tone.

The small plates offer an enticing and unusual start to the meal, but ramen is the main event. Following in the steps of its sister restaurants, Haikan uses Sapporo-style noodles, made from a custom recipe and imported from Japan. In most dishes aside from the vegetarian ramen, noodles are cooked in a typical chicken, beef and pork-based Chitan stock. The four ramen options add staple flavors like miso and shio and offer standard toppings such as roast pork and sprouts. For a few cents to a few dollars extra, diners can add a variety of additional toppings.

The shoyu ramen ($12.75) arrived promptly, with its toppings piled on a dark broth. The ground pork, akin to stew meat in heartiness, lends the broth its charred flavor. The barbecue-flavored chashu pork was slightly chewy, while the three thick slabs of pork belly ($3), a daily special topping, were herb-marinated and dry. Although each iteration of pork is distinct, none features the salty, marinated flavor and tenderness one expects of pork in ramen.

The portions of vegetarian toppings are even more generous than those of the pork-based dishes, and each additional element contributes its own distinct flavor to the bowl. The massive quantity and intense flavor of the tender memna ($1.75), or bamboo, feature its prominence among the ingredients. Even though it would benefit from more spice, the egg is boiled to perfection. The wakame ($0.50) has a characteristic ocean flavor, while the sharpness of the onions stands out in the otherwise darkly flavored dish.

The vegetarian ramen ($13.75) stands out in light of its slightly creamy broth. Though sweet at first sip, the yellow broth unveils a fiery flavor that immediately sweeps across the palate. The spicy-and-sweet veggie spice bomb ($1) complements the broth’s simpler flavor. The proportions of vegetables are balanced, a rare and desirable feature among ramen bowls. The corn kernels add bursts of sugar that further distinguish the spice bomb from typical salty, hearty bowls. The onion and bitter romaine cut the sweetness to round off the delightfully unusual dish.

Heaped at the bottom of the bowls, the reputed noodles have a mild but distinct warm and rich flavor and maintain their firm consistency to the last slurp. Despite falling short of acting as the most dynamic element of the dishes, the noodles’ flavor appears to recede whenever combined with the texture of other ingredients.

The over-21 crowd can peruse the extensive sake menu, and, for a treat at the end of the meal, customers can indulge in red-bean-stuffed bread or a shaved ice dish. The intriguing and varied sampling of small plates and loaded bowls of ramen keep Haikan bustling and establish it alongside its reputed sister restaurants on the Washington, D.C., ramen scene.