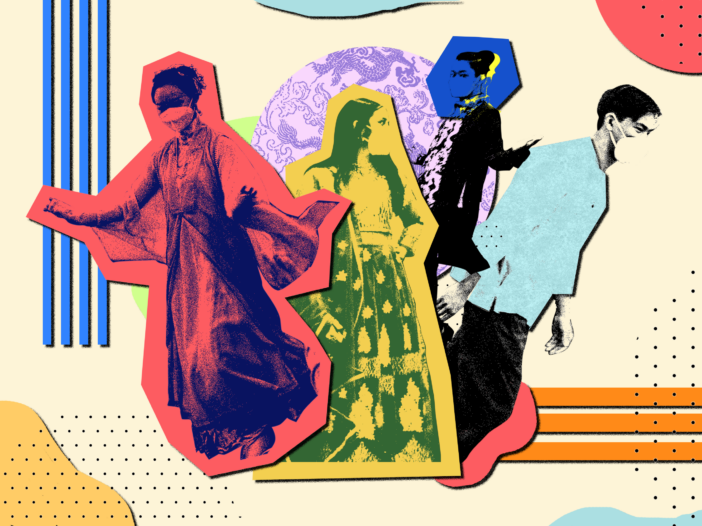 CW: This article references sexual assault and anti-Asian violence. Please refer to the end of the article for on- and off-campus resources.

After Ariel Le (NHS ’24) breezed down a runway donning a regal red and yellow áo dài — a traditional Vietnamese gown — she recalled a feeling of empowerment in representing her Vietnamese identity through fashion.

“Just being able to wear my áo dài, or ‘long shirt,’ has been really important to me just because when I was younger, there wasn’t enough representation of those Southeast Asian identities,” Le told The Hoya. “So being able to go up there and finally represent myself when I couldn’t do it before is very important.”

Beyond celebrating Asian cultural clothing, the event sought to foster discussions about fashion, culture and identity, all while raising money for the Asian/Pacific Islander Domestic Violence Resource Project (A/PI DVRP). For organizers, participants and attendees alike, Runway ASIA was an important space for students to embrace their identity at a predominantly white institution (PWI) while celebrating the diverse identities within the Asian community.

Runway ASIA found a home at Georgetown University thanks to students advocating for the celebration of diverse Asian identities through fashion.

The AASA Political Awareness Committee (PAC) wanted to use the event to fundraise for an important cause: supporting Asian and Pacific Islander survivors of domestic and sexual abuse. Donating to A/PI DVRP was an important way for Runway ASIA to support survivors, according to PAC Co-Chair Lauryn Ping (COL ’23).

“We felt like the issue of sexual violence, specifically against A/PI individuals, was something that we were very concerned about and we wanted to raise money to support A/PI DVRP,” Ping said.

One in three women experience some form of physical or sexual violence, with women of Southern Asian descent experiencing some of the highest rates of intimate partner violence at 35% .

“It’s extremely important to support an organization that specifically provides services to A/PI survivors who might have language barriers or might have immigration issues,” Ping said.

All of the ticket proceeds were donated to A/PI DVRP, with the event raising $730 in total, according to PAC Co-Chair Sarah Tyree (COL ’24).

Ultimately, Ping and Tyree sought to embrace Asian fashion in an act of rejecting anti-Asian hate.

“We wanted to uplift Asian cultural clothing, just because of all of the anti-Asian racism and hate,” said Ping.

Since the onset of the COVID-19 pandemic, violence against Asian American communities in the United States has skyrocketed. In San Francisco, the police department reported a 567% spike in anti-Asian hate crimes during 2021.

“Because many of our cultures have experienced Western imperialism or Western colonialism and continue to experience that today, I feel like many individuals experience cultural shame and this act of being celebrated in your cultural clothing is in a way like celebrating your cultural identity and pushing back against the ideologies of white supremacy,” Ping said.

The Expression of Culture

While the monetary goal of the event was to fundraise for A/PI DVRP, the PAC co-chairs also envisioned a space in which students could uplift the power and beauty of their cultural heritages without fear of judgment.

As the student models walked down the runway in their myriad traditional clothes, a soundtrack of all Asian artists blasted behind them, highlighting the innovation of Asian art in multiple media.

“There isn’t a lot of Asian representation in general in the media,” Angela Nguyen (COL ’24), the tech director for the show, told The Hoya. “So we thought choosing all Asian American artists or just Asian artists was a great way to showcase their talents and that there are talented and amazing Asian artists out there.”

Moreover, the show aimed to celebrate the diversity within the greater Asian community, according to Ping.

“This event really showcases the diversity within the Asian community. We’re not a monolith. Each culture has their own unique, beautiful clothing that we wanted to celebrate,” Ping said.

Spotlighting specific Asian communities, such as the South Asian community, which has been overlooked within AASA and in larger discussions about the Asian diaspora, was an important goal for the show, according to Manushi Tanna (SFS ’24).

“I know that AASA as a whole has not been the most inclusive in the past of all Asian identities, and I really wanted to make sure that South Asian identities were being represented,” Tanna said.

Nguyen said that Runway ASIA marks one of AASA’s recent attempts to reconcile with its exclusionary history and increase their accessibility to all Asian students at Georgetown.

“I’m technically not a general body member of AASA, because I recognize AASA’s history as being predominantly East Asian and exclusionary,” Nguyen told The Hoya. “It’s something that I’m aware that PAC and Lauryn and Sarah have been doing a really great job trying to reconcile. So when Lauryn reached out to me from PAC asking if I wanted to help out, I thought it was a great opportunity to help rebuild the connection with AASA and diversify.”

Runway ASIA highlighted a collective effort by Georgetown students from all regions of Asia to represent their cultures on an equal standing, creating the potential for a brighter and more inclusive future for AASA that evolves with Georgetown’s community, according to Tyree.

Runway ASIA was the first event of its kind to be hosted by AASA, according to Tyree. The fashion show featured clothing from several Asian countries, from Indian anarkalis to Filipina dresses handmade by family members to traditional Taiwanese attire styled as casual streetwear.

An especially crucial component of the show was that any student could model and have the opportunity to share the significance of their clothing to the audience after strutting down the runway.

Francis Tseng (COL ’25), an international student from Taiwan, explained that his clothing helped him retain a connection to his family while studying in the United States at Georgetown.

“Ever since I came to the States, in a way, these clothes kind of brought a sense of identity and who I am and what I like, all the way to the States,” Tseng said during the show. “So I started wearing them on the streets, and in a way I feel like it’s representing who I am and where I came from. This is the story of my life.”

For Le, attending a PWI like Georgetown means a feeling of exclusion pervades nearly every part of her college experience.

After showing off her historically accurate replica of Ming Dynasty Han ladies’ wear on the runway, Sunni Luo (COL ’22) emphasized the importance of honoring the history of fashion throughout Asia to appreciate various beauty standards.

“People in China — especially the younger generations —are looking back to history and looking back at old styles and old fashions,” Luo said during the show. “It’s an important process of realizing that it’s not just one beauty standard that really matters throughout history, even if we only see one now.”

Runway ASIA featured traditional Asian clothes that are often only seen in intimate contexts like holiday celebrations with family, according to Ping.

“We wanted to create an event that would celebrate Asian cultural clothing and Asian cultures in general, rejecting Eurocentric beauty standards and create a venue for people to be able to talk about their relationship between their culture, fashion and identity,” Ping said.

Students who grow up in predominantly white communities can experience a sense of alienation toward their cultural identities from their clothes, according to Tyree.

“Feeling that cultural shame and the pressure to assimilate is really prevalent. Even if people aren’t being actively discriminatory or trying to shame to your clothing, just having to explain yourself constantly about what you’re wearing is a little isolating,” Tyree said.

Tanna said events like these can counteract feelings of alienation from her cultural roots and foster self-acceptance.

“When you’re younger and you’re wearing cultural clothing, you get made fun of. In this type of environment, it’s celebrating it and it reverses that experience that many of us have when we’re young,” Tanna said. “So I think it’s really cool — not only to teach other people about other cultures, but also to help people feel proud about their own culture.”

Runway ASIA’s tagline was “Asian Style Inspires Activism,” and Nguyen said she took the phrase to heart while adorned in her own áo dài, made by a relative of theirs who lives in Vietnam.

Celebrating self-identity by wearing one’s cultural clothing can be a form of radical activism in and of itself, Nguyen said.

“Embracing your identity is a form of activism because it’s so radical and so brave to do at a PWI or in a Western-dominated society,” Nguyen told The Hoya. “Activism starts with yourself and with education, and that starts with embracing and accepting the art that comes with your identity.”