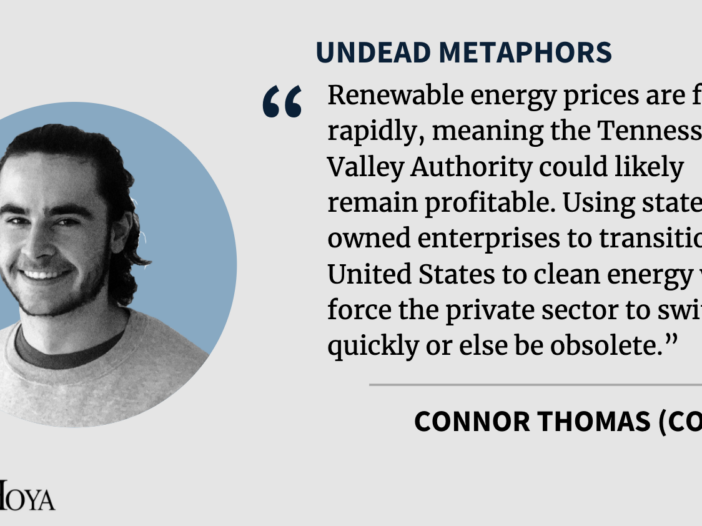 Happy Earth Day, Hoyas. Despite all the apocalypticism embedded in my column, I have yet to acknowledge the most apocalyptic subject of all: environmentalism. There is at least one — glaring — observation missing from the current discourse: To some, environmentalism is a science; to others, a religion; to me, a classic case of Plants vs. Zombies.

Although it might seem like an innocuous smartphone game, Plants vs. Zombies actually makes a dangerous ideological argument: A free-market approach can satisfy increasing energy demand and do so sustainably.

In the game, zombies slowly trickle toward your back porch on a grid-style game board, and you must plant bellicose botanicals to defend your home. The catch: to purchase plants, players need capital, or suns, that either come from sunflowers, themselves purchased with suns, or fall from the top of the screen.

This framework places the zombies squarely in the role of the energy consumer. Indeed, the relationship between so-called natural resources and consumers of natural resources seems more adversarial than symbiotic right now. The United States, in particular, consumes more than its fair share of energy, with only 11% coming from renewables. Plants vs. Zombies correctly identifies the battleground, but it mistakenly characterizes the plants as up to the task of handling the zombies.

The game generally holds off on sending a horde of zombies until midway through each level in order to allow you to build up reserves of the capital and labor required to prevent them from destroying your home. The problem is we seem to have woken up in the middle of the final wave, and the market is just not moving fast enough to sustainably satisfy our own consumptive needs.

Blame should not only fall on individuals whose habits constitute just a drop in the bucket. Rather, industrial, commercial and transportation sectors account for more than three-quarters of U.S. energy consumption, the rest coming from residential sources.

Fiscal conservatives would like to tell a story about how the free market will come around to renewables after it sees their value and the potential for profit. The U.S. Energy Information Administration, however, predicts that renewables will account for only 16% of total energy consumption by 2050 — 20 years after the next significant climate change milestone.

To speed things up, our best recourse is for the government to exercise control over the energy market. Within the context of our Plants vs. Zombies analogy, we need a giant sunflower to make up for lost time. Thankfully, there is progress to report. This week, Reps. Alexandria Ocasio-Cortez (D-N.Y.) and Cori Bush (D-Mo.) introduced a Green New Deal for Cities bill, which would allocate $1 trillion in direct investments to various municipal clean energy projects.

The progressive caucus’s proposal would build upon other measures proposed by the Biden administration, including the American Jobs Plan, which allocates funds to create jobs in sustainable energy and infrastructure. A main difference lies in Biden’s preference for tax cuts and credits versus direct investments.

The Biden administration hopes corporations can be incentivized through tax policy to do the dirty work of reimagining the United States’ energy production. There is more the government could be doing to face this existential threat, however. Enter the more imaginative proposals from think tanks.

People’s Policy Project, a crowdfunded think tank, remains free from the influence of corporate interest groups and uses this freedom to propose aggressive solutions to the slate of energy crises facing the country. Arguably, its most interesting proposal is to include a Green Tennessee Valley Authority in the Green New Deal.

This proposal goes beyond vague commitments from the Biden administration to instead build up infrastructure that gets right to the heart of energy production. In Plants vs. Zombies terms, the TVA could be a mega-sunflower able to power as many plants as it takes to combat the zombies.

The Tennessee Valley Authority emerged from former President Franklin Delano Roosevelt’s original New Deal in 1933, and it remains the largest publicly owned power provider today. The TVA started out producing hydroelectric power, and, when we zombies demanded more, it began to build coal-fired and nuclear power plants in the ’50s and ’60s.

The TVA has taken steps toward decarbonizing its power sources, even though it lacks a clear goal or timeframe for when it might achieve net-zero emissions. The PPP’s proposal argues that the TVA could be put to better use building renewable energy plants nationwide. Local power companies could remain the same, but the actual energy would come from TVA-run zero-emissions plants.

The federal government can use its subsidizing powers, including funds freed up now that fossil fuel subsidies will be phased out by 2022, to make TVA energy prices competitive with nonrenewable competitors. Renewable energy prices are falling rapidly, meaning the TVA could likely remain profitable. Using state-owned enterprises to transition the U.S. to clean energy will force the private sector to switch quickly or else be obsolete.

Besides directly producing energy, this policy would influence private firms to do the same, and it would prove that state-owned business can work in the United States, which would open up possibilities for similar projects in other sectors. Instead of relying on small-scale production to fight existential problems, more and more mega-sunflowers could be drafted to finance the fight of the plants versus the zombies.

Connor Thomas is a junior in the College. Undead Metaphors appears online every other Friday.