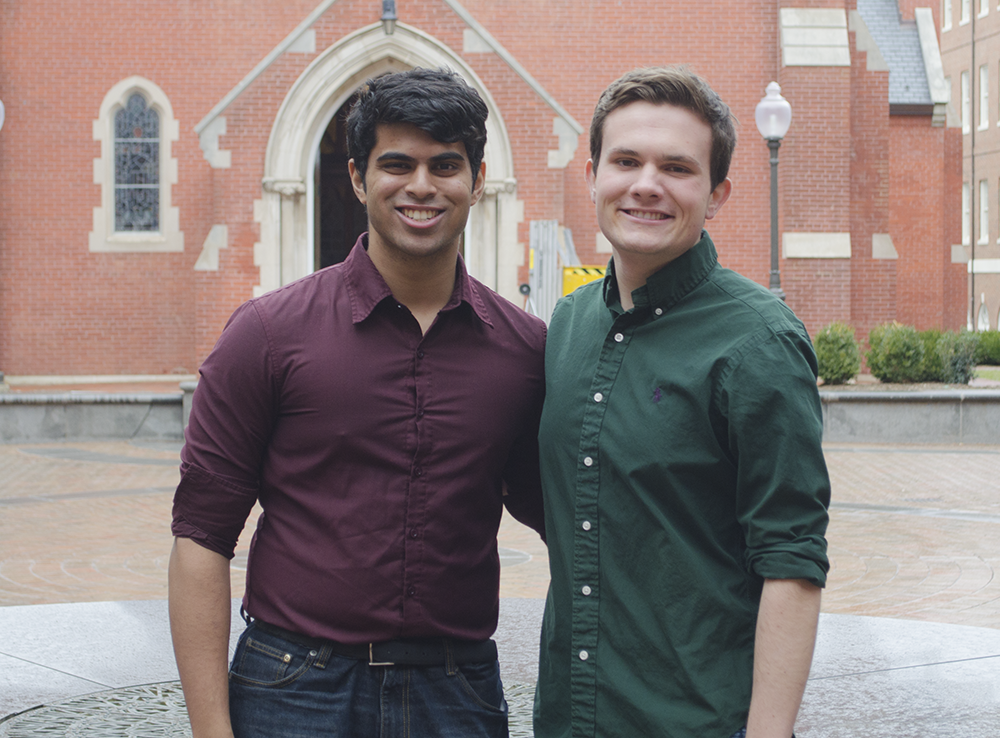 In the summer before his sophomore year, Tim Rosenberger’s (COL ’16) parents discovered that he was gay.

“Their position was, ‘We aren’t paying for Georgetown,’” Rosenberger said. “‘Georgetown is why you think this lifestyle is OK. Sending you to this school and paying for it would be like giving a heroin addict money for drugs.’ That was the exact analogy. So I had no money.”

Rosenberger moved out of his family home to live with a friend in Cleveland, Ohio and weighed his options. He decided to contact the Georgetown Scholarship Program to see if it was possible to return to school, and was met with a positive response.

“It was like this mysterious process, but everything came around well enough,” Rosenberger said. “I became a [resident assistant], I received much more financial aid. In terms of having money to live with and play with, I got three jobs. Last summer I was working 90 hours a week. It was crazy. But, it all worked out.”

After Rosenberger returned to campus, he involved himself in the gay community by becoming active in GU Pride, which he said taught him about many smaller student groups on campus.

“By becoming a part of that group, through doing programs about intersectionality, I got exposed to a lot of other groups on campus with equally large concerns,” Rosenberger said. “Through GSP, I met a lot of people with a lot of really concerning experiences and I realized that, I thought about my time in GUSA in the senate, we never talked about these students.”

As candidates for the 2015 Georgetown University Student Association executive race began creating platforms, Rosenberger studied them thoroughly, hoping that a ticket would advocate for the groups that he worked with in GU Pride.

“I was asked to work on most of the other major campaigns, and each time I was asked, starting in August, there was no campaign that was really bringing forth the issues I’m passionate about,” Rosenberger said. “There was nobody that I thought I could joyfully throw myself into supporting.

After failing to see a ticket promoting the issues he saw as most important — these particular students and their concerns — Rosenberger decided to enter the presidential race himself.

“We [the senate] were never having conversations about these students in crisis,” Rosenberger said. “I think making their voices heard would go a great way toward making the university more responsive, making students more supportive, making classes better attuned to students.”

When he decided to run, Rosenberger, who has written in The Hoya about his experience working at Town Danceboutique, a gay bar in the District, attracted attention in a Catholic, conservative online magazine called Pewsitter in late January. The article, titled “Militant Gay Republican Set To Become Georgetown Student Body President,” features a letter written from an anonymous, Georgetown-related source calling Rosenberger a “militant homosexual activist” and endorsing candidate Abbey McNaughton (COL ’16) for her Catholic ties.

Despite the article and a barrage of insulting emails sent to his personal account after its publication, Rosenberger continued to build his campaign staff and develop his platform.

Rosenberger said that Varghese’s experience with a large number of student groups and his understanding of the campus plan — Varghese serves on the senate subcommittee concerning the 2018 Campus Plan — made him an appealing choice.

“I don’t think there’s anybody on campus that gets funding reform, the campus plan and the logistics of running GUSA as well as Reno,” Rosenberger said.

Both Rosenberger and Varghese have involved themselves in a wide range of groups and activities both on- and off-campus over the past three years.

On their campaign website, Rosenberger says his favorite organizations are the Georgetown Scholarship Program and Campus Ministry. Varghese says his favorite part of Georgetown has been his involvement with the International Relations Club, serving on their board last year and travelling with the Model United Nations team.

Thomas Lloyd (SFS ’15), who ran in last year’s GUSA executive election, said that Rosenberger has been a close friend and confidante since they met through GU Pride.

“Tim and I have described each other as each other’s arms, as each other’s right hand, for a long time,” Lloyd said. “He’s one of the most caring and giving people I’ve ever known. It’s funny; Tim comes across to people as very cool and very calm and quiet. Being a Republican, people will instantly apply negative stereotypes to him. But there’s really no one I know who would do more for someone they care about without question.”

Zach Busch (SFS ’16) met Varghese during his freshman year at a Model UN conference and has lived with him the past two years.

“Reno is a man of many talents and eccentricities,” Busch said. “He never sleeps. He’s always finding something new to be passionate about and he does always follow through somehow, even with all of his commitments. He is there for his friends. He’s deeply loyal.”

Together, Rosenberger and Varghese have worked to craft a platform “for the love of Georgetown,” as their campaign slogan reads. The pair plans to, first of all, fix certain Georgetown issues immediately.

“I think that what we’re focusing on is that we want all of the things on our platform to be things that can actually happen,” Varghese said. “Things like funding reform, things like inclusion access, even things like expanding What’s a Hoya? We think we can work with the fundamentals and make them better.”

In addition to the “fundamentals,” Rosenberger said that his ticket will work to advocate for students and campus workers.

“We know that Leo’s is abusing their workers. We know that people become ill because of food on campus,” Rosenberger said. “We know that people who have mobility issues get put on the fourth floor of Copley, the elevators break. There are these things that are really problematic and we need to fix quickly, and these are things we’ll focus on first.”

One particularly important area of focus for Rosenberger is reforming mental health and Counseling and Psychiatric Services on campus.

Last year, his close friend Lloyd called CAPS after Daniel Milzman, a then-College sophomore in the Class of 2016 admitted to him that he had manufactured ricin, which he brought to Lloyd’s room. CAPS failed to respond to Lloyd’s call for over an hour, and during that time, Lloyd called Rosenberger for advice.

“In terms of CAPS, no candidate has had a horror story like me,” Rosenberger said. “Nobody else has been called by a friend who has a biotoxin in their room.”

In their platform, Rosenberger and Varghese propose expanding the size of the CAPS office, hiring additional staff for longer-term therapy and prescribing privileges for anti-depressants. CAPS Director Phil Meilman said that, following this incident, the program is working with students like Rosenberger to improve their services.

“We are presently working with a dedicated group of students on strengthening our outreach, more clearly defining on our website the services we offer, and considering new issues and ventures that the students have suggested,” Meilman wrote in an email.

“[We want to] see if we can add to the Colleg[iate] Readership program, by adding the Wall Street Journal, the Economist and Barron’s, as well as perhaps shift some of the paper distribution online for sustainability purposes as well as to save money,” Rosenberger said.

In fact, the print readership program, which provided copies of USA Today, the Washington Post and the New York Times, was cut by the current GUSA executive team in March to preserve its budget. Currently, GUSA provides students with online subscriptions to the New York Times, a service that began in September.

Rosenberger also said he wants to build on the freshman-oriented What’s a Hoya? program with an increased budget, more executive support and the inclusion of sophomores and transfer students.

What’s a Hoya? coordinator Megan Murday (SFS ’15) said that these changes would benefit the program and enable it to better serve the student body.

Rosenberger and Varghese have also proposed appointing an unrecognized student group adviser to the Council Advisory Board, a move that would allow groups like H*yas for Choice and sororities and fraternities to have more representation.

Rosenberger said that he believes he and Varghese can fix the most pressing problems facing Georgetown.

“The university, for all of its faults, does a decent job of trying to address issues. They just don’t do it very well,” Rosenberger said. “Reno and I have shown in the past, through our work on campus, that we really get these issues and can work to change them.”