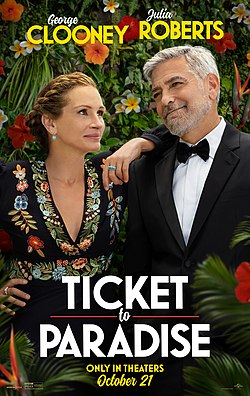 The allure of a quality, feel-good rom-com is often associated with nostalgia of the 90s and early 2000s — “Something’s Gotta Give,” “How to Lose a Guy in 10 Days,” “My Best Friend’s Wedding” and “When Harry Met Sally” are among the ones that come to mind. Luckily, the chick flick void has been filled by a new movie: “Ticket to Paradise.”

Starring one of the most iconic duos in Hollywood, George Clooney and Julia Roberts, as David and Georgia Cotton, “Ticket to Paradise” captures a spark between two of the industry’s best. Simply observing the chemistry between the two dynamic, lovable actors on screen, in addition to the amusing plot, makes for an incredibly enjoyable trip to AMC Georgetown.

In stereotypical enemies-to-lovers fashion, the movie follows an embittered divorced couple as they reunite after 25 years to accomplish a pressing common goal: stopping their daughter from getting married.

Upon finishing law school, their daughter Lily decides to embark on a trip with her best friend to Bali, Indonesia. As luck would have it, just as she is having second thoughts about returning to the rat race of life as a lawyer, she runs into an attractive Balinese native who lives humbly as a seaweed farmer with an enormous, happy family. Shortly after, the couple spontaneously decides to get married, an impulsive choice that reminds Lily’s parents of their own impulsive marriage, which ended anything but amicably.

Georgia and David Cotton’s reunion is filled with endless quips that Roberts and Clooney execute flawlessly. As they subtly plot their sabotage together, fond memories of years past and genuine enjoyment of each other’s company accompany those quips. The two previously disapproving parents eventually share in Lily’s affection for her new husband and give the young couple their blessing, resulting in the idyllic ending that characterizes a true rom-com.

Many critics have chastised the screenwriting for its cliches and predictability, and it is true that the story is far from Oscar worthy. Of course, the ex-couple gets drunk and ends up rekindling their affection. Of course, they get caught for stealing the couple’s rings in another last-ditch effort to “curse” the wedding. And, of course, they eventually come around to the idea of their daughter getting married as her advice helps them realize their own flaws.

The film won’t make it into the rom-com hall of fame or have universally recognized quotes. Some of the dialogue, like the use of “McMansion” in an unironic context, came across as forced. Nevertheless, plenty of one-liners leave the viewer smiling, like David Cotton’s request that the flight attendant “leave the bottle” of champagne instead of the individual glasses.

It’s exactly these classic archetypes that make the movie enjoyable. Contrasting suspenseful films filled with gore and sadness, “Ticket to Paradise” offers a peaceful two-hour escape to the beautiful islands of Indonesia coupled with the reliable humor of parents who simply want the best for their children but might cross the line in pursuit of that goal.

You’ll leave the theater in a better mood than when you arrived, along with a reminder to indulge in the present, as the movie’s motif conveys: “Why do the good things have to wait?”

As long as you enter with the intention of simply enjoying yourself and appreciating the talents of its famous actors, you will be satisfied by “Ticket to Paradise.” Be sure to stay through the credits to watch the bloopers — not only will you be booking your next trip to Bali but will also be wishing you could be friends with Clooney and Roberts.