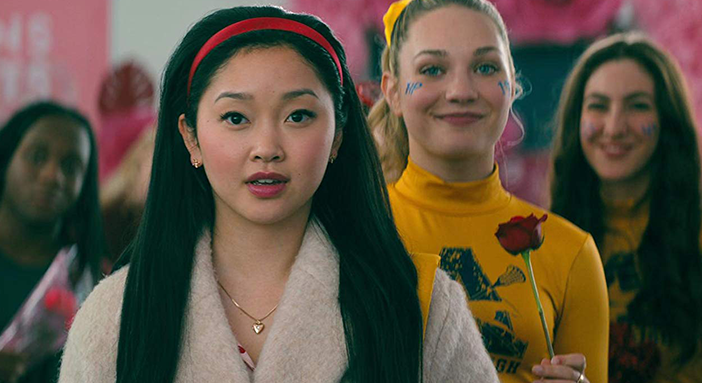 Despite the captivating romance in “To All the Boys I’ve Loved Before,” its sequel fails to build on the story of the couple’s new relationship. With an uninspiring relationship and awkward anachronisms, the sequel does not deliver the romance promised by its pre-Valentine’s Day release.

“To All the Boys: P.S. I Still Love You” picks up as Lara Jean (Lana Condor) and Peter (Noah Centineo) go on their first date as a new couple. Their romantic bubble is soon popped, however, when John Ambrose (Jordan Fisher), one of Lara Jean’s past crushes, comes back into her life, introducing uncertainty into her new relationship. The stereotypical love triangle ensues as teenage jealousy and insecurity escalate relationship tensions.

The lack of romantic chemistry between Lara Jean and Peter leaves the audience unsure whether viewers should root for the couple. Though the couple’s first date at a romantic restaurant is full of soft lighting and charming ambience, the interaction between the two seems perfunctory. Even with the two sitting feet apart, there is no chemistry when Peter reaches over to kiss Lara Jean’s hand. The rest of the date night, though cute, fails to regain the electricity that viewers saw in the first film in 2018.

The depiction of the relationship is further sabotaged as neither protagonist is able to show genuine care for the other. Despite constantly saying that she loves Peter and wants to be with him, Lara Jean nevertheless fails to tell John Ambrose of her relationship status even when he is clearly flirting with her. Her confusion between the two men may be understandable, but her repeated choice to hide her relationship makes the audience question if she really cares about Peter as much as she says.

Peter similarly shows problematic tendencies that undermine the film’s attempts to portray him as sympathetic to the audience. On Valentine’s Day, knowing Lara Jean is expecting a grand gesture, Peter only gives her a necklace and reads her an unoriginal poem he passes off as his own. Though he later explains that he only hoped he could write something as good, his lackluster defense does not justify why he did not simply spend more time to come up with a more thoughtful gift.

Peter later fails to pay attention to Lara Jean at a party, only leaving with her after coincidentally noticing her sitting in the corner. His lack of effort in maintaining their relationship does not match his claim about loving Lara Jean, which is a distracting incongruity throughout the film. Halfway through the movie, it seems like even a happily-ever-after would only be lukewarm.

Throughout the movie, anachronisms in the otherwise modern setting make the plot too relatable to young audiences. With Valentine’s Day featuring stereotypical a cappella group serenades and a carnival date, it seems as though a middle-aged writer was trying too hard to imagine what teenagers do these days. The anachronisms detract from the authenticity of the film and make it even harder for audience members to see themselves in the plot.

One of the few saving graces of the sequel is Kitty (Anna Cathcart), Lara Jean’s younger sister. With her witty comments and humorous interruptions, Kitty offers a welcome distraction from otherwise awkward situations with uninteresting dialogue. Her playful relationship with Lara Jean accurately captures the type of banter typical of sisters, adding some much-needed authenticity to the movie.

While “To All the Boys: P.S. I Still Love You” had potential to build an unforgettable romance following the cheeky previous film, the movie failed to capture the opportunity. Even original fans of the Lara Jean and Peter relationship were left wanting for a reason to root for them again.