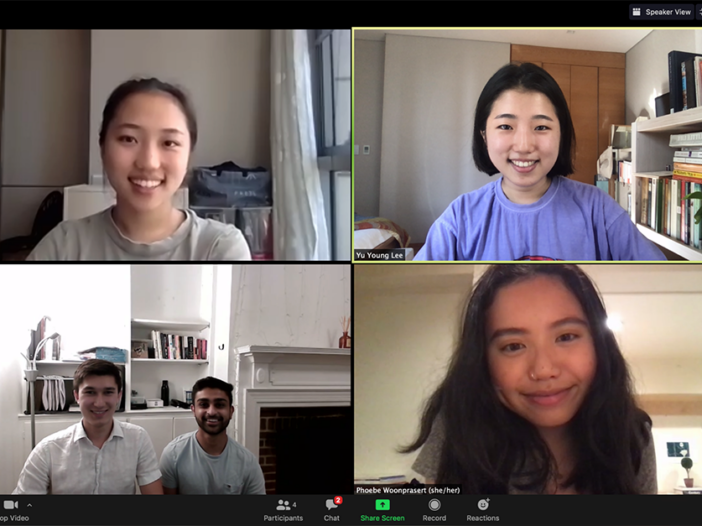 Losing in-person classes has also meant losing the opportunities to bump into strangers walking to class or strolling through Red Square. Searching for those serendipitous connections, four undergraduate students decided to relaunch the Instagram account for Humans of Georgetown.

Students originally created the account in 2013. Until recently, its most recent post was dated February 2016. So, when Carlos Asorey (SFS ’21) messaged the page asking if anyone was there, Seo Young Lee (COL ’22) thought it was high time to resume the storytelling.

Humans of Georgetown, based on the 2010 photography project Humans of New York that aimed to photograph 10,000 inhabitants of New York City and has since gained over 20 million followers on social media, photographs Georgetown students, faculty, staff and graduates and catalogs their stories. The project’s earnest, personal focus makes it especially important in an impersonal time, according to Lee.

“It would be such a shame for something like Humans of Georgetown to fade away,” Lee said in a Zoom interview with The Hoya. “Especially now more than ever, there’s no way of casually bumping into someone so we think, we hope, that we can be the platform that proactively reaches out to people to get those spontaneous stories that someone may just scroll past.”

To reinstate the account, Lee and Asorey assembled a team, including Asorey’s roommate, Neehar Mahidadia (NHS ’21), and Lee’s sister, Yu Young Lee (COL ’24). Since then, Olivia Lebo-Planas (COL ’23) and Phoebe Woonprasert (SFS ’23) have joined the project.

“What we’re focusing on is trying to create a sense of community while we’re online and so disconnected,” Yu Young said in a Zoom interview with The Hoya. “We want to get a sense that we are still humans of Georgetown regardless of where we’re all placed.”

Anyone can submit a story or nominate a friend to be featured on the account through a Google form. From there, the account’s organizers reach out for an interview. If a storyteller is on campus, Mahidadia said he and Asorey try to safely connect in person. Otherwise, the team meets online.

The Humans of Georgetown team strives to make the interviews casual and friendly, Yu Young said in an interview with The Hoya.

“We want to emphasize that it’s just a conversation about their life, their values, their thoughts, their feelings,” she said. “Anything is valid.”

“I won’t lie, the quarantine was tough,” Patel said in a post about living on campus. “But being out and being able to meet all these incredible people from around the country and even around the world has made my time here worthwhile.”

For Mahidadia, the stories shared by Humans of Georgetown resonate as much with the nostalgia felt by seniors with the sense of unfamiliarity some freshman might be experiencing, he said.

“There’s a lot that connects the population of Georgetown together that people don’t know yet,” Mahidadia said in a Zoom interview with The Hoya.

The pandemic has radically repurposed the main mission of Humans of Georgetown, which initially set out to be a platform to share spontaneous experiences on campus, according to Yu Young.

“It’s interesting to have a twist where the stories that we share are very intentional and not as random or organic as they could be,” she said. “Not wrong or bad, but a different kind of storytelling.”

Though Georgetown may be smaller than New York City, there are no fewer stories to share and showcase, according to Mahidadia.

“Georgetown is a very tightknit and small community, and part of this is to showcase that,” he said. “While we’re all different, we’re all humans of Georgetown.”