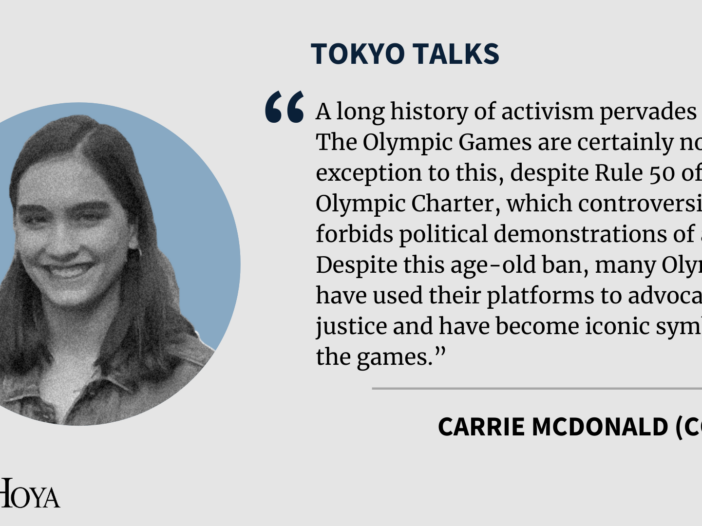 A long history of activism pervades sports. The Olympic Games are certainly no exception to this, despite Rule 50 of the Olympic Charter, which controversially forbids political demonstrations of all kinds. Despite this age-old ban, many Olympians have used their platforms to advocate for justice and have become iconic symbols of the games.

The 1906 Games saw track and field athlete Peter O’Connor scale a flag pole while waving an Irish independence flag. Two hundred meter gold and bronze medalists Tommie Smith and John Carlos famously raised gloved fists to protest racial discrimination at the 1968 Games in the wake of Martin Luther King Jr.’s assassination. These acts of defiance and many others have become cemented in Olympic legend.

Yet these brave acts of protest were not without consequence. Both Smith and Carlos were suspended from the Olympic team, expelled from the Olympic Village and subject to harsh public criticism upon their return to the United States. Recent Olympic athletes have been penalized for social advocacy as well. In 2019, the United States Olympic and Paralympic Committees placed American fencer Race Imboden and American hammer thrower Gwen Berry on a yearlong probation for peacefully kneeling and raising a fist during their medal ceremonies at the 2019 Pan American Games in Peru in a protest against racial injustice.

The past year has seen a dramatic surge in athletes engaging in peaceful protests at sporting events, from increased kneeling during the national anthem to players boycotting their games after Jacob Blake’s death at the hands of the police. As a result, the value of Rule 50, which firmly states that “no kind of demonstration or political, religious or racial propaganda is permitted in any Olympic sites, venues or other areas,” has come under question.

While the U.S. Olympic and Paralympic Committees announced new guidelines allowing athletes to peacefully protest without fear of sanctions at the U.S. Olympic and Paralympic trials, the International Olympic Committee has opted to uphold Rule 50 in its entirety at the Tokyo Games this summer. This decision stands despite a growing number of athletes electing to use their platforms to advocate for change.

In a report defending the ban on demonstrations, the Athletes’ Commission of the IOC described Rule 50 as a necessary framework to “protect athletes from the potential consequences of being placed in a position where they may be forced to take a public position on a particular domestic or international issue.” The Commission also drew attention to the need to ensure “the focus of the Olympic Games remains on the celebration of the athletes’ performances, sport and the Olympic values.” Despite its controversy, particularly among American athletes, the Commission emphasized athletes’ general support of Rule 50, highlighting a survey of 3,500 athletes from 185 different countries in which over two-thirds of respondents disapproved of peaceful demonstrations during the Games.

Forbidding demonstrations and imposing sanctions on athletes who choose to peacefully protest, however, spurns the need to stand up for justice; many athletes, especially those who have been personally affected by injustice, wish to use their platform to advocate for change. The Commission cited a desire to keep the attention on the athletes’ sporting performances, yet banning protest will cause further controversy and debate when it inevitably occurs, driving public focus even further away from the sporting event.

Ultimately, each Olympian will have their special moment at the Games; it should be up to them to decide how to spend it without having to sacrifice their Olympic dream.

Carrie McDonald is a rising sophomore in the College. Tokyo Talks appears online every other week.