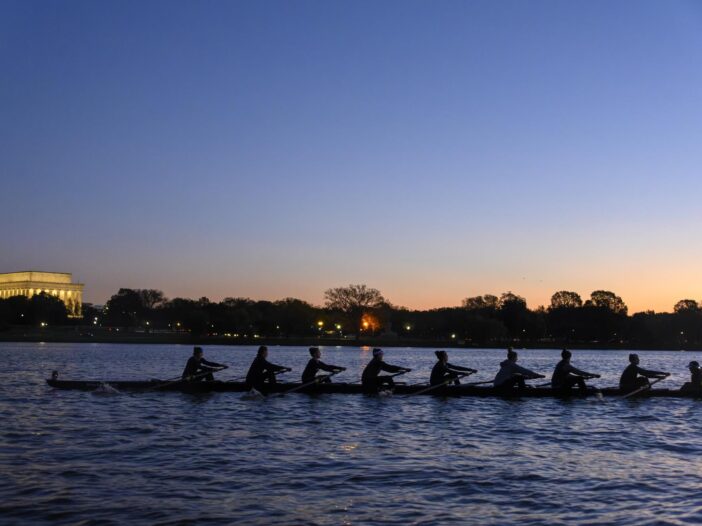 The Georgetown women’s rowing team was one of 16 teams that plunged its boat into the crystal waters of Lake Wheeler for the Lake Wheeler Invitational in Raleigh, N.C. on April 22 and 23. Facing some of the top athletic programs in the country, the Hoyas battled to a 12th-place finish over the weekend.

The openweight team competed in the varsity fours, the second varsity fours, the varsity eights and the second varsity eights races. After a victorious performance against George Washington and George Mason for the George’s Cup, the openweight team took the trek down to North Carolina for the meet jointly hosted by Duke University and the University of North Carolina at Chapel Hill.

All four shells fought hard in each of the three rounds, but it was the varsity fours, the second varsity fours and the varsity eights team that secured fourth-place finishes. In a three-way tie for 12th with Bucknell and North Carolina, the Hoyas ended the two-day affair with 5 points. With oars cutting through water all weekend, Syracuse was able to secure first place for the invitational with 83 points, just edging out the likes of the Blue Devils as well as the University of Pennsylvania.

“We were able to compete against some of the top crews in the country and test and challenge our squad’s speed and depth. In each race, our crews were able to learn and adapt as we found ourselves in various different positions,” Arnold and Pagnozzi-Schwam wrote in a joint statement to The Hoya.

Pushing limits in a high-pressure environment, the team was able to identify areas for future improvement despite not obtaining as many points as they had expected.

Though they finished in the bottom half in earlier races, the athletes kept their heads high and pushed through, according to Arnold and Pagnozzi-Schwam.

“The back half of the season is always a high energy, competitive experience as teams begin reaching peak speed, making for tight margins across the board,” the captains wrote.

The Hoyas are continuing to make adjustments, optimizing their chances for postseason success. Their energy reverberated off the waves of Lake Wheeler as they carried their unflappable confidence in each other to their final races.

With cheers up and down the teeming ripples in the water, the Hoyas were able to channel this energy and make a final splash in the last few heats.

The varsity eights team just missed out on a bronze-medal finish, with the University of Miami finishing at 06:48.100 and the Hoyas crossing the line two-thousandths of a second after at 06:48.102. While the second varsity fours finished around 10 seconds behind the bronze-medalist Hurricanes, the varsity fours finished just inches and three-tenths of a second away from the bronze medal as Bucknell was able to eke out the last spot of the podium with a time of 07:51.970 to the Hoyas’ 07:52.227.

Though they failed to medal, the captains remain optimistic about the future of the season.

“Heading into Eastern Sprints, our squad hopes to put down strong, aggressive racing in Worcester,” they wrote. “We continue to look to gain speed in every [race] and are excited to close out our regular season with another weekend of elite level racing.”

Looking to the future, Georgetown hopes to build on its momentum from its previous races as it travels to Worcester, Mass., to take on more top-tier programs in the Eastern Sprints. The openweight division will compete, as well as the lightweight team, which has not competed since the Knecht Cup Regatta from April 9 to 10. With tougher competition under their belt, the Hoyas hope to find a groove and carry over some “row”-mentum into the NCAA Championships, which begin May 27.