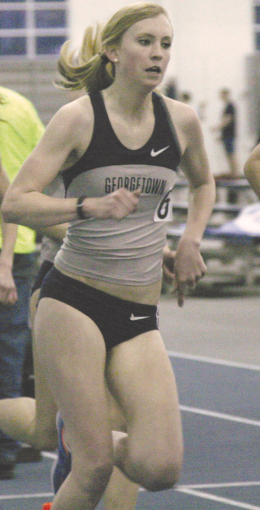 After excelling in individual events over the past two weekends, the Georgetown track and field team will send its relay teams to Philadelphia this weekend to test their mettle against stiff competition in the prestigious Penn Relays.

Last week, half the team went West to Walnut, Calif., for the Mt. SAC Invitational, where the team faced several foes among the best it has seen this year. Some runners, like junior Rachel Schneider, were able to overcome the fast pacing, but others, such as sophomore Chelsea Cox, fell flat. Still, Director of Track and Field and Cross Country Patrick Henner believes that his Hoyas should rise above these distractions.

“Athletes have to go out and just focus on what they can do,” Henner said. “You can’t let competition affect what you want to do [in a race].”

It might seem counterintuitive that the quality of the competition affects a race of individual athletes, but pacing plays a major role in determining a runner’s performance. If the pace of the race is faster than usual for a given athlete, he may unconsciously speed up. Breaking out of the predetermined race plan means the athlete is likely to burn out during the race and finish with a slower time than he wanted.

The Hoyas should expect exactly that sort of situation at the Penn Relays, which always figures to be a grind for the team but is also good preparation for postseason events. This year’s invitational will draw athletes from such schools as Miami, Florida State, Auburn and Arkansas, as well as a host of schools from the mid-Atlantic.

The last time the men’s 4×400 meter team ran was at the Colonial Invitational at George Mason on April 14. The squad, consisting of sophomore Hansel Akers, senior Austin Perron and graduate students Toby Ulm and Kevin Wilson, won the event with a time of 3:13.34.

The point of regular-season events is not to win, however; it is to qualify for postseason play. The time that the men’s team posted is not good enough to qualify for either the Big East championship or the first round of the national championships, and Henner knows that the team needs to focus to reach its goal of 3:08.

“On the men’s side, we need to have [Akers] or Perron do a good job leading off,” Henner said. “We can’t have our best runner, [Wilson], leading off.”

The women’s squad also pulled out a victory at the same invitational, as Cox, senior London Finley and juniors Tenille Stoudenmire and Amanda Kimbers earned a close victory with a time of 3:40.34.Henner would also like to see this time come down by at least three or four seconds.

“We’ve got to put it all together,” Henner said.

Putting together a consistent race has proven to be difficult, but relays are generally where the Blue and Gray excel, and Henner is confident in his team. Action started in Philadelphia today, but Georgetown is not scheduled to compete until this weekend.