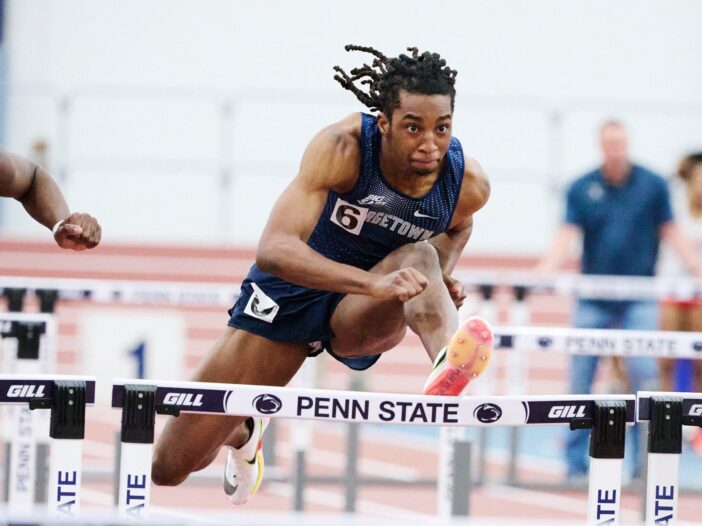 The Hoyas produced strong results in both the track and field competitions at the Nittany Lion Challenge at Penn State University on Saturday, generating momentum for the rest of their indoor and upcoming outdoor seasons.

Graduate Eni Akinniyi built off her resume as a two-time Big East Champion with her second straight win in the triple jump this indoor season. Akinniyi jumped 12.16 meters for the championship title, 0.42 meters ahead of second place. Sophomore Alexis Emery earned seventh place after jumping 11.21 meters.

Sophomore Chloe Williams also shared in Georgetown University’s field success, jumping 5.53 meters to finish third in the long jump. Williams was followed by Akinniyi with a jump of 5.36 meters for seventh place.

On the track, senior Maya Drayton finished third in the 400 meters with a time of 55.75 seconds, while first-year Jadah Fitzgerald followed closely behind in fifth place with a time of 56.77 seconds. The 4×400 team’s time of 3:51.93, featuring Fitzgerald, Drayton, sophomore KC Ashiogwu and first-year Finley McGee, finished in fourth place.

On the men’s side, junior Christopher Pitt scored a third-place finish in the long jump, tallying 6.82 meters.

Graduate middle-distance runner Rusty Kujdych and sophomore distance runner Marlon Belden opted for a shorter race than usual in the mile. Kujdych finished second in 4:10.13, while Belden was barely behind in third with a time of 4:10.21.

In the sprints, the Hoyas also demonstrated many strong performances. In the 60-meter hurdles, senior Malachi Quarles earned third place with a time of 8.32 seconds, while sophomore Aaron Lindsey ran 49.75 seconds to earn fifth place in the 400-meter race.

The men’s 4×400 team, consisting of Lindsey, Tostenson, sophomore Joshua Peron and first-year Nicholas Givan, finished in fourth place with a time of 3:19.41.

Alton McKenzie, director of cross-country and track and field, was proud of the potential that the Hoyas demonstrated.

“I felt Matt Rizzo competed well, running 1:19.56 in his first 600m is great effort,” McKenzie told Georgetown Athletics. “Marlon and Rusty stepped down from their usual longer distances to run impressive for the mile. Freshman Nick Givan was also impressive in the 600m and came back to run an exceptional leg on the 4×4. Chris Pitt’s consistent series in the long jump should lead to big jumps later this season.”

McKenzie was glad that the Hoyas were able to bounce back to deliver at the invitational after the three and a half weeks of winter break.

“Overall, we had some decent performances coming off the winter break and rebooting our Indoor Season,” McKenzie said in a Georgetown Athletics press statement. “We’re looking forward to building from this meet and getting better as the season progresses.”

The Hoyas hope to improve upon these results as both the men’s and women’s teams travel to Blacksburg, Va., to compete at the Hokie Invitational at Virginia Tech on Friday, Jan. 20 and Saturday, Jan. 21. In addition, first-year distance runner Luke Ondracek will be the only Hoya to travel to Richmond, Va., to compete in the Under-20 Cross Country Championships hosted by USA Track & Field on Jan. 21.