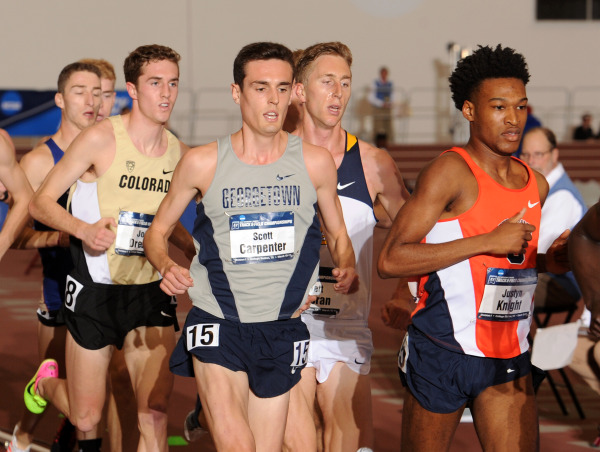 With the Big East Championships three weeks away, the Georgetown men and women’s track and field teams built momentum by notching several personal records on April 21 and 22 at the Virginia Challenge, hosted by the University of Virginia.
The Blue and Gray impressed with top-10 performances in the men’s 3,000-meter steeplechase, 1,500m run and long jump.
The Hoyas’ significant presence has persisted since the beginning of the 2017 outdoor track and field season. While some athletes have continued to thrive in their usual events, others have ventured into new challenges.
Despite having trained little, junior Autumn Eastman finished 11th in her debut collegiate steeplechase with a time of 10:33.74.
Eastman put her best foot forward and entered her debut race with ease, not thinking about her limited preparation before the race.
“I haven’t had much practice or training in the steeple leading up to this debut race. So I was going in with a really calm mindset: just have fun out there and see what I can do,” Eastman said. “It adds a different complexity and level to the sport.”
Continuing a strong outdoor season, junior Jody-Ann Knight ran yet another personal record in the women’s 400-meter dash. With a time of 56.53, she won her heat and secured the No. 19 spot in all sections of the event. Seniors Emma Keenan and Nathaniel Gordon also had impressive performances, finishing 13th and No. 26 in the men’s and women’s 800m event, respectively.
Freshman Eion Nohilly earned a personal record of 9:01.66 in the men’s 3000m steeplechase, outrunning his previous collegiate steeplechase of 9:09.54 on the first day of competition.
The second day of competition brought yet another string of Hoya successes. Junior Madeline Perez earned a personal record in the women’s 5000m run, clocking 16:21.59, a near 15-second improvement from her time at the start of this season. Other notable personal records came in the men’s 200m event by junior Nick Sullivan with a 22.48 run and in the men’s long jump by senior Kenneth Armstrong with a 6.85m jump.
As the Hoyas continue through their outdoor season, they will travel to Philadelphia this weekend for the three-daylong Penn Relays.
In preparation for the upcoming competition, Eastman plans on building on her strong steeplechase debut.
“I will be racing again this coming Thursday at Penn Relays. It will be another test to get some miles under my belt going over hurdles,” Eastman said.