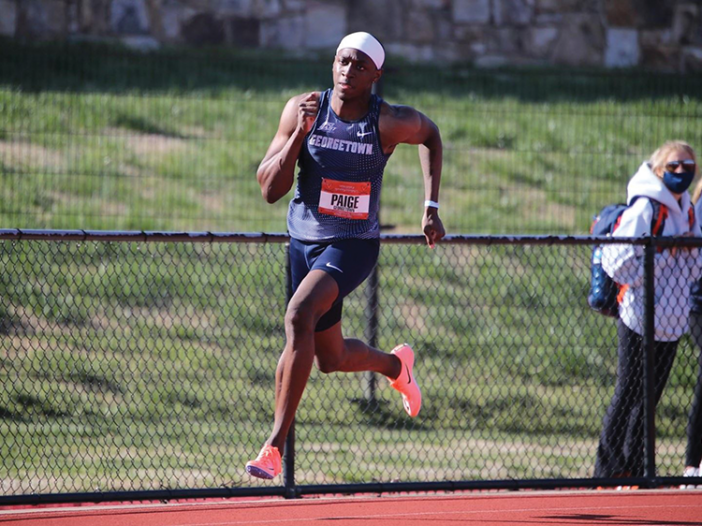 On a speedy Sunday in Fairfax, Va., the Georgetown men’s and women’s track and field teams nabbed one first-place finish and seven other top 10 finishes at the George Mason Spring Invitational.

Sophomore Malachi Quarles placed first with a score of 14.49 in his dominant victory in the men’s 110 meter hurdles. Quarles and junior D’Andre Barriffe finished in ninth and 16th place, respectively.

Sophomore Tim McInerney produced another top-three finish for Georgetown, grabbing third place with a lifetime best time of 1:51.24 in the men’s 800 meter race. Behind McInerney was junior Maazin Ahmed, finishing in 15th place out of 35 runners.

Rounding out a successful day for the men’s squad was another strong performance by senior Josiah Laney, who finished fourth in the triple jump and eighth in the long jump.

The women’s squad also flexed some muscle in the middle-distance competition, where first-year Sierra Dinneen secured a place on the podium by earning third in the 800 meter race with a time of 2:10.45. Fellow first-year Chloe Gonzalez was hot on Dinneen’s heels, finishing in fourth with a time of 2:10.48 after winning her preliminary heat earlier in the day. Senior Lexi Del Gizzo finished the race in 13th place.

When asked about both teams’ success in the middle-distance events in a phone interview with The Hoya, Georgetown’s Director of Track & Field/Cross Country Alton McKenzie remarked on his squad’s history and legacy.

“Traditionally, we’ve always been strong in this area,” said McKenzie. “The goal is to be more balanced. That’s a tradition and legacy we plan to uphold. We’re going to try to be better across more events, but we’re not going to lose sight of what we’re successful at.”

McKenzie also recognized the success of other team members who competed at the Joe Walker Invitational in Oxford, Miss. on April 9 and 10. The men’s squad nabbed six personal best times in the 1500 meter race, while junior Cathilyn McIntosh dominated her 800 meter heat and fellow junior Sami Corman achieved a personal best 4:18.27 in the women’s 1500 meter contest.

Following a successful weekend, the Hoyas will return to the track April 16 and 17 for the Virginia Challenge in Charlottesville, Va.