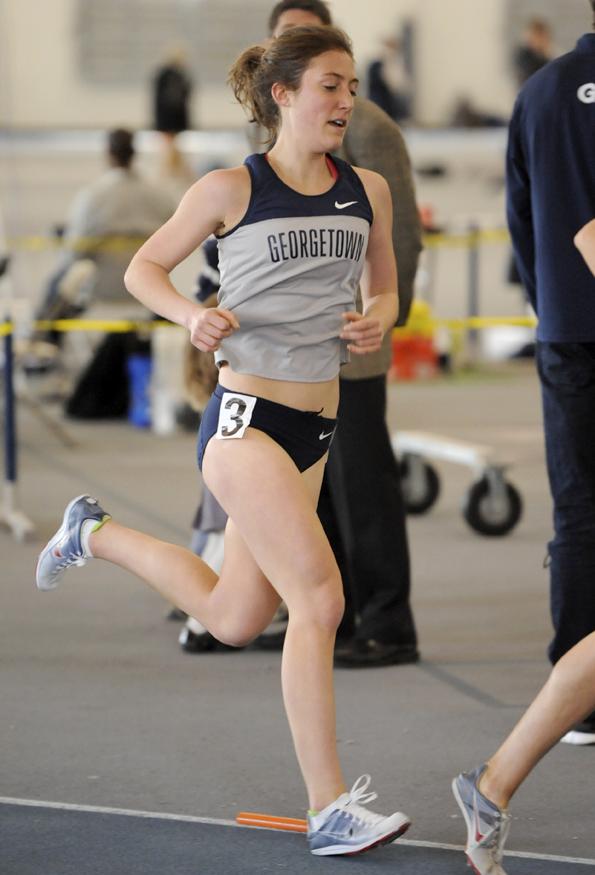 After a busy weekend at the Giegengack Invitational at Yale University and the New Balance Invitational at the Armory in New York last week, most of Georgetown’s indoor track and field team can look forward to staying home on the Hilltop this week.

However, for a select few Hoyas, this weekend will be anything but relaxing as they try to notch top times for the postseason.

While most of the team rests for the Big East championship in two weeks, redshirt junior Toby Ulm and junior Theon O’Connor will travel to Indiana University to run the 800-meter at this weekend’s Hoosier Hills Invitational.

Ulm is coming off an impressive season opener in the800m at the Giegengack Invitational, in which he won the race with a time of 1:49.88. While Ulm is primarily focused on the 400m hurdles during the outdoor season, his success at Yale proved that he is ready to compete in the indoor 800m on a national level.

“For Toby, we really feel like he has a chance to hit the NCAA time for the 800m,” Director of Men’s and Women’s Track and Field Patrick Henner said. “He just needs … a couple more racing opportunities.”

On the other hand, O’Connor is looking to get his season back on track. After a disappointing 800mlast weekend, where he managed only a ninth-place finish, the Hoyas decided to enter O’Connor in the Indiana meet at the last minute to give him another chance to compete before the Big East championships.

Joining Ulm and O’Connor at Indiana on Saturday is senior Ayalew Taye, who will compete in the 3,000m run. Taye is coming off a strong showing that earned him a victory in the men’s mile at theGiegengack Invitational, and he will now turn his focus to running a fast time for the 3K.

Henner noted that both Ulm’s and Taye’s races will be set up by Indiana runners, so the pace will be very fast right off the bat.

“We’re really emphasizing to Ayalew that ‘Hey, [the fast pace is] really just setting you up for a good race,'” Henner said. “[Our athletes] are going to run fast by focusing on competing and finishing well off of [a] fast pace.”

The lone Hoya competing for the women this weekend is sophomore Emily Jones, who will run the 5,000m at the Flotrack Husky Classic at the University of Washington on Saturday. Jones has yet to run the 5,000m in the indoor season, but Henner thinks that she is capable of besting her personal record of 16:31.82 in the event.

“There’s going to be a lot of good women 5K runners out there,” Henner said. “It’s going to come down to competing.”