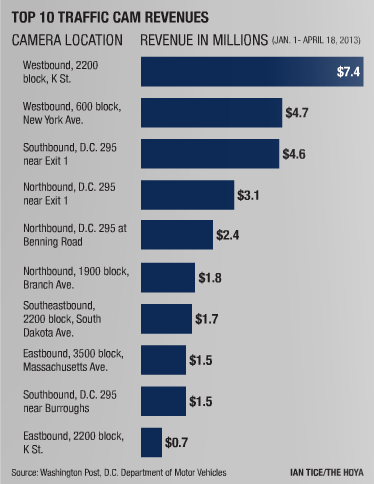 Students with cars and those driving university vehicles for student groups may find themselves unexpectedly fined due to the Metropolitan Police Department’s recent activation of new traffic cameras throughout the District.

According to MPD Director of Communications Gwendolyn Crump, the cameras were placed strategically based on data generated by the MPD.

“The deployment locations for the automated traffic enforcement units were selected based on a variety of criteria, including sites with crashes and injuries, calls for service, high speed volume, near schools or in zones prohibited for use by certain commercial vehicles,” Crump wrote in an email.

The cameras, intended to combat aggressive driving, will monitor speed limit, red lights and stop signs and issue tickets through the mail. There are currently over 130 traffic cameras positioned across the District.

While there are no new cameras in the blocks surrounding Georgetown’s campus, DPS Chief of Police Jay Gruber expressed that the cameras would nevertheless have positive effects on the Georgetown neighborhood, including increasing driver and pedestrian safety.

“Although none of the cameras directly impact the campus, the new cameras will most likely reduce traffic crash injuries, pedestrian injuries and deaths, as well as facilitate a smoother commute for our community,” Gruber wrote in an email.

While several Georgetown groups regularly use university vehicles around the District, student drivers are responsible for paying any fines incurred while operating vehicles for their respective groups.

Jessie Silvis (COL ’16), a driver for D.C. Reads, said that she was not aware of the cameras but will now be more careful while driving.

“I’ll definitely have to take that into consideration because if we get a ticket with the [Center for Social Justice] vans that would reflect really negatively on the university and probably would cost us something,” Silvis said.

Although Silvis said she recognizes the possible repercussions of traffic camera tickets, she noted that the drivers in the program already drive safely.

“I’m not too concerned, because we usually are on smaller roads or on highways where the speed limits are high, so we usually have to follow the speed limit anyway,” she said. “We try to drive pretty safely, considering we have a van full of tutors or kids going back and forth from the schools, so hopefully most people aren’t breaking the speed limit.”

Financial and Administrative Officer for the CSJ Lauren McCoy said that the organization did not have an official statement on how the new cameras might affect groups.

“It really won’t affect us because we don’t speed,” Nessler said.