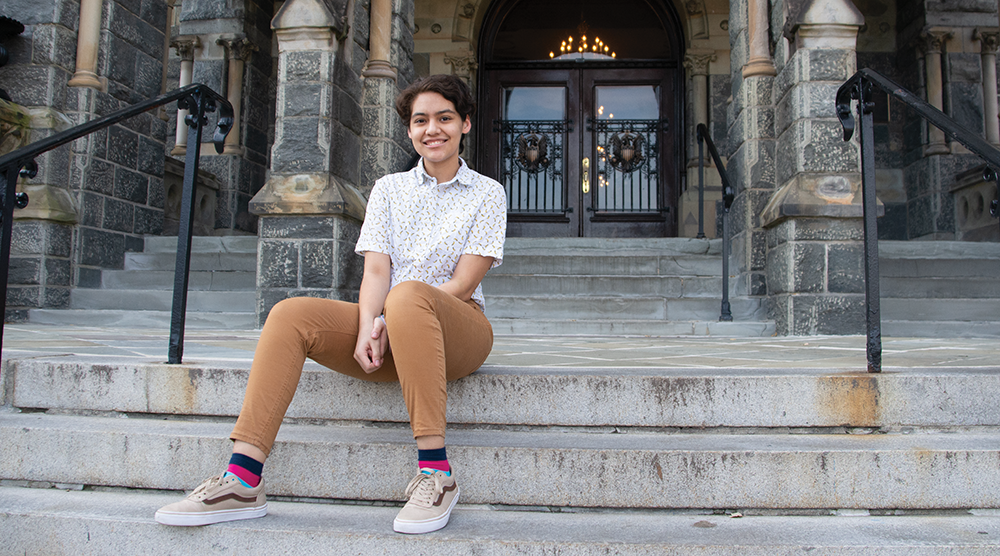 For Al Castillo (SFS ’22), Georgetown felt like a chance to finally represent himself in his honest form.

“When I was in high school, I presented myself as a girl — that was who I was,” said Castillo, who uses he/him pronouns. “Now, I was able to present myself as I truly was, rather than some facade I was putting on for several years of my life. It was really interesting being able to begin anew here at Georgetown.”

For many transgender and nonbinary students, this story sounds unfamiliar.

In hopes of fostering education and support for queer and trans students, the university provides institutionalized spaces, like the LGBTQ Resource Center, founded in 2008, and student groups like GU Pride and Queer People of Color. Yet queer and trans students cite challenges from tokenization and institutional shortcomings as they attempt to forge their own support networks on campus.

Despite the well-intentioned support from student groups and institutionalized spaces, transgender or nonbinary students can feel burdened by defending their identity on campus.

GLAAD, a media-monitoring organization founded by LGBTQ members of the media, defines transgender as “an umbrella term for people whose gender identity and/or gender expression differs from what is typically associated with the sex they were assigned at birth.” The group refers to nonbinary and genderqueer as “terms used by some people who experience their gender identity and/or gender expression as falling outside the categories of man and woman.”

Chad Gasman (COL ’20), who uses they/them pronouns, feels tokenized when they try to speak up for their community at Georgetown.

“When someone who is marginalized speaks up on behalf of their community and other communities, they are automatically labelled as angry at everything,” Gasman said. “That may be true, but the anger is used as a reason to not believe the person, or not respect what they have to say. People don’t take my anger as a trans person seriously, or, when they do take it seriously, they think it’s too much and want you to tone it down.”

The pressure to perform — even within spaces dedicated to the LGBTQ community, like the resource center — can be difficult, according to Mackenzie Foy (COL ’19), who uses she/her and they/them pronouns.

“If I went to the LGBTQ center, there wouldn’t be beef, but I’d be tokenized,” Foy said. “When I go there, I feel like I am performing, because I have to. There is a misconception that we always want to be social justice warriors. We’re forced into that. I feel like I often have to defend myself in a way that is personal, instead of intellectual. Not only do I have to refute one’s argument, but I have to defend my whole existence.”

Tyler McConville (COL ’22), who uses they/them pronouns, has experienced surface-level conversations about personal pronouns that have not resulted in proper usage.

“I feel like spaces aren’t as good as they could be,” McConville said. “Something a lot of spaces do is ask pronouns, but I feel like there’s not a push to make sure people are using the right pronouns or even talking about what pronouns are.”

McConville attributes this surface-level support to the lack of transgender faculty or staff in the LGBTQ Resource Center and the Georgetown community at large.

“I haven’t seen or heard about any trans faculty, or anyone that works on campus that’s actually trans,” McConville said. “I feel like it would be helpful to have a support system that’s run by trans people. When I need support, I don’t want to be educating someone. I want someone to know what I’m going through and help me and meet me where I’m at.”

While the LGBTQ Resource Center attempts to “provide education, programming, support services, and voice to Georgetown students, faculty, staff, and alumni of all sexual orientations and gender identities,” according to its mission statement, some students feel a lack of resources for health care, housing and organizing spaces on a more institutional level.

For example, despite the university’s effort to provide gender-neutral bathrooms on campus, logistical hurdles limit access for trans and nonbinary students, according to McConville.

“[Gender neutral bathrooms] are often locked or out of order, which is really frustrating,” McConville said. “I would just hope that they would be made readily available, because I’ll go to the gender bathroom and be excited, but it’ll be locked and I’ll have to use the women’s bathroom.”

In many buildings, Gasman is unable to use any bathroom at all.

“There are buildings on this campus where I can’t pee,” Gasman said. “I will go to the gendered restrooms if I have a friend with me, but I’d still prefer not to. If I didn’t have my own private restroom in McCarthy, I would have to leave the building to go to the bathroom.”

The Office of Planning and Facilities Management is already working to fix gender-inclusive bathroom signage across campus by January, according to the LGBTQ Resource Center Director Sivagami Subbaraman.

“Gender inclusive bathroom signs will go up soon in all public buildings — not residential ones,” Subbaraman wrote in an email to The Hoya. “We are aiming to have one on each floor of each classroom and public building — and they need to also meet Disability access code.”

Housing requests for private bathrooms or single rooms face scrutiny and require a medical note, according to Gasman.

“I know other students who want a single, want to change the gender of whom they’re living with, or need a private restroom for safety issues, and have a really hard time getting that,” Gasman said. “A lot of the times, you need a medical note. The problem with that is that many trans people don’t have the resources, or even desire, to seek a medical route for their identity — especially in college. It’s unlikely that the university would take simply being trans as a medical reason for a single.”

Georgetown’s Office of Residential Living launched the Crossroads Living Learning Community this year after a student-driven push to create a living space dedicated to gender and sexuality.

Crossroads LLC faculty adviser April Sizemore-Barber describes the LLC as a way to acknowledge the prevalence of LGBTQ students in every part of the university.

“By situating this space in the purview [of] ResEd, the university acknowledges that the issues impacting LGBTQ+ people don’t end when classes are over or the day is done,” Sizemore-Barber wrote in an email to the Hoya. “LGBTQ+ people are revealed to be present in all aspects of campus life.”

Housed in Village C East, the LLC is open to students from all class years and allows all gender identities to feel respected and supported with proper living accomodations, according to Sizemore-Barber.

“Trans/NonBinary students living in Crossroads do not have to negotiate the nightmare of communal or two-gendered bathrooms — incredibly stressful for those who do not visibly conform to gender norms,” Sizemore-Barber wrote. “Each dorm room has its own bathroom and students are assigned rooms on the basis of their gender identity (rather than the gender they were assigned at birth).”

Just as students worked to create a formalized gender and sexuality LLC, queer students must make their own communal spaces. Foy observed an apparent lack of support networks for queer students of color.

“As a queer black person on campus, there is no institutional space for us,” Foy said. “We make those and we always make those for ourselves.”

Derrick Little (COL ’18), Sonia Adjroud (SFS ’20) and Julia Hycinthe (NHS ’18) founded Art Beyond the Margins, a club that aims to provide a platform for art with a specific focus on artists from marginalized backgrounds, in 2017. The club is a response to the isolation queer students of color feel in art clubs on campus, according to Little.

“I tried to venture out to a couple of notable on-campus arts clubs, but I often found myself as the only person of color or queer person — sometimes both — in a significant amount of on-campus clubs. Consequently, I often felt isolated in these groups,” Little said in an interview with The Hoya.

Yet designing one’s own support networks can take a toll on students such as McConville, especially for those grappling with mental health issues.

“One of the issues that’s been difficult for me at Georgetown is that although being nonbinary is such a big part of my identity and experience, I’m also a student, an artist, an activist,” McConville said. “Just as a freshman, especially as someone who’s mentally ill, it’s been really difficult to work up the emotional energy to try and create resources for myself that aren’t there.”

Gasman sees a gap between the university’s professed support for the LGBTQ community and actual resources available to students.

“I think Georgetown loves to posture itself as an LGBTQ-friendly campus,” Gasman said. “We have a center and Crossroads, which are huge, but these are just little things, and outside of those spaces, there isn’t the same level of support that there would be. There is no baseline level of support for trans students, or most queer students.”