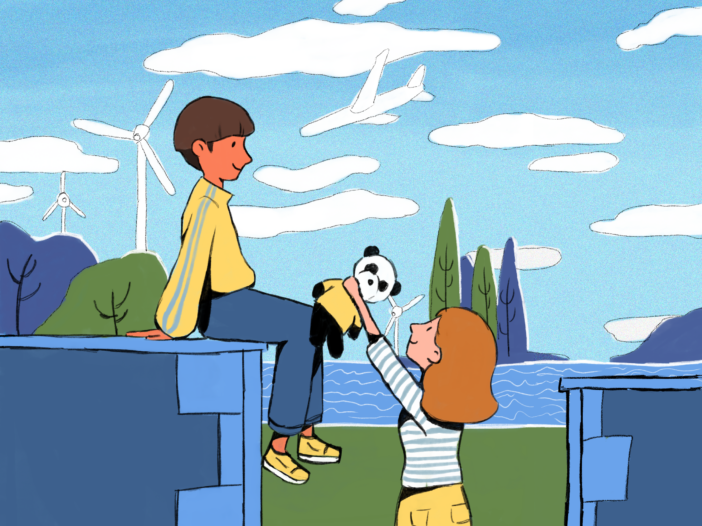 While Jack the Bulldog is perhaps the most recognizable mascot on campus, a traveling panda bear’s Georgetown University stardom is on the rise, having amassed a loyal Instagram following since the account’s founding in February.

“Chunky the Georgetown Panda” began as a photo project capturing the plush stuffed animal at different locations across campus. This summer, however, Chunky embarked on a nationwide tour of Georgetown students’ hometowns via flat rate box — which also inspired the account’s posts advocating for the United States Postal Service, on which Chunky is so reliant.

Unlike Jack, this seven-inch-tall Webkinz mascot, boasting more than 1,300 followers, was able to connect with fans in person during the COVID-19 pandemic. With trips to North Carolina, California, Tennessee and New York, just to name a few, Chunky has made appearances on the doorsteps of Georgetown seniors and freshmen alike and even flown in the cockpit of a passenger plane.

As the account @chunky_the_panda has grown, Chunky has been a connection to the now-remote Georgetown community for those who have interacted with the account, as well as an unconventional advocate for causes like awareness of nonverbal autism in addition to the postal service.

Five current students — two seniors, two juniors and one sophomore who refer to themselves as Chunky’s guardians — manage the account, reply to fellow students as Chunky and handle the logistics of shipping Chunky their way, while also encouraging them to donate to the Autistic Self Advocacy Network. The founder of @chunky_the_panda pays for shipping.

Initially, the guardians reached out to students on social media to ask whether they would be interested in receiving Chunky in the mail. Now, there is a waiting list of about 40 students who have made requests, according to the account’s founder and one of Chunky’s guardians.

The one guardian interviewed for this feature was adamant about remaining anonymous in the interest of Chunky’s brand, as the Instagram account replies to direct messages and reaches out to students, and even The Hoya, always in character. When pressed about Chunky’s origins, perhaps as a childhood toy of some sort, Chunky’s guardian would say only that Chunky is from the National Zoo.

“The only reason why he’s not there at the National Zoo is, because of his size, they allowed him to prioritize his education,” Chunky’s guardian said in an interview with The Hoya.

Places To Go and People To See

Like most Georgetown freshmen, Audrey Landstreet (COL ’24) has yet to take a class in the Intercultural Center or grab a bowl of noodles from 5Spice; rather, she is experiencing college life from the foliage-filled porch of her eastern Tennessee home. Getting closer to the Georgetown community has been tricky, according to Landstreet, so receiving an Instagram message in August from the self-proclaimed “Georgetown Panda” after she had left a comment on one of Chunky’s stories was a pleasant surprise.

“He reached out to me and asked if he could stay with me, and I was really excited. I said, ‘Of course!’” Landstreet said in an interview with The Hoya. “We’re all over the country, all over the globe — not on campus together. So that was a really cool way to feel like I had a part of Georgetown with me.”

Freshmen make up a majority of Chunky’s following, so a focus of Chunky’s online presence has been targeting the freshman community by offering advice via Instagram “Ask Me Anything” stories and direct messages, according to Chunky’s guardian.

“Over the summer, he helped a lot of them by giving them advice on classes, answering any questions they had about Georgetown — who are some good teachers, what clubs to join — and giving them PDFs of the textbooks for popular classes like econ or accounting,” Chunky’s guardian said.

After Landstreet built an online rapport with Chunky, the panda’s arrival in the mail led to a day of scenic Blue Ridge Mountains hiking and plenty of photos with the toy over a span of a few days.

Much like Landstreet, Natalia Suska (MSB ’22) did not expect to be visited by the raggedy panda either, though she had heard of the stuffed animal from a classmate. In April, she received a text from one of Chunky’s guardians asking if the plushie would be welcome at her home in Niagara Falls, N.Y.

“I was really excited about it,” Suska wrote in an email to The Hoya. “I took an interest in Chunky because I felt connected to him and his message of peace and positivity.”

“Once Chunky was shipped to me, we chilled a bit in my living room and took some photos with Easter eggs and a basket (it was Easter time), and later in the week, I took him to visit Niagara Falls State Park, which he loved! The mist from the waterfall made him feel really refreshed,” Suska wrote.

Of all the sights Chunky has seen and places he has been, however, one of the most impressive is a flight deck 40,000 feet in the air; Chunky’s primary guardian introduced him to a United Airlines flight attendant and asked whether Chunky could meet the pilots and take a picture.

Landstreet and Suska were not the only ones excited about meeting Chunky — the pilots were just as enthusiastic and embraced the idea, according to Chunky’s guardian.

“They said, ‘How about we hold on to him for the whole flight? I’ll take a lot of good pictures of him, and I’ll give him to you at the very end,’” Chunky’s guardian said. “So, then, halfway through the flight, the pilot walks up to me during his meal break and brings out his iPhone and AirDrops all these pictures to me, and they were awesome.”

The resulting Instagram upload of those pictures even prompted government and foreign service professor Anthony Arend to comment on the post, “This is outstanding!” Arend himself is a frequent animal Instagrammer, posting many pictures of his cat Oop on a cushion embroidered “All My Children Have Paws” on his account @anthony_clark_arend.

Chunky’s guardians hope the panda is worth more than his meme value, so they have made Instagram posts and stories in which Chunky advocates for two causes that are nothing alike, yet both related to the panda: nonverbal autism and the postal service.

Chunky, as a toy, is a symbol for nonverbal autism, according to his guardian and his Instagram bio, which links to the Autistic Self Advocacy Network.

“[Chunky is] nonverbal. He does a lot of stuff like, for example, he goes to class or flies a plane and stuff like that, all these activities. You can inspire kids because we live in a highly communicative world, but it’s possible to take on this world even being nonverbal,” Chunky’s guardian said.

Last week, the account announced an upcoming AirPods raffle in which proceeds will be donated to an organization with the mission of helping children with nonverbal autism. The account has yet to announce the organization to which it will donate.

The panda’s interaction with charitable causes makes him more than just stuffing and polyester, his fans say. Followers are well aware of the account’s focus on nonverbal autism, some of whom see this small-scale spreading of awareness as an admirable goal for the account, according to Danya Adams (COL ’21), who was one of the first to be visited by Chunky in Bethesda, Md., back in March.

“Although Chunky might be inanimate, the panda is a tool to advocate for others. I think Chunky has an important message of celebrating others, especially in his advocacy towards non-verbal autism,” Danya wrote in an email to The Hoya. “I would hope that as Chunky’s fan base grows, Chunky will continue to advocate for important causes and extend his reach.”

Whether or not that message grows into larger outreach or fundraising, the toy has been effective at increasing awareness person by person, according to Emma Ladouceur (MSB ’21), who was visited by Chunky at her home in New York City during the summer. Ladouceur took pictures of the plushie at her own local landmarks, including the school where “Gossip Girl” was filmed.

Though Chunky’s guardian founded the account with nonverbal autism in mind, recent events have prompted Chunky to throw his support behind an additional cause: the postal service.

“He’s advocating for USPS, because the two-day shipping has kind of devolved into seven-day shipping for him,” Chunky’s guardian said.

The national postal slowdown led the account to announce a temporary suspension of Chunky’s interstate travel earlier this week, but the guardians will continue to have Chunky interact with students locally in Washington, D.C., and online.

Since the Instagram account has commented more on the postal service and other topics like wearing masks, the account has received questions about Chunky’s politics. The guardians, however, reject getting political in any way, according to Chunky’s guardian.

“Someone asked if he was a Republican or Democrat. I said neither because our country is so divided,” Chunky’s guardian said.

The account’s decision not to disclose a political affiliation for the stuffed panda led some students to conclude that the inanimate toy is secretly a Republican, according to Chunky’s guardian.

“Chunky is apolitical,” Chunky’s guardian said. “One of the things that I wanted to make sure with this was to not make political statements, but go along with social movements.”

In spite of the minor backlash surrounding the toy’s nonexistent politics, the pseudo-Georgetown mascot continues to gain notoriety. Chunky’s guardian has scheduled an upcoming photo-op with Chunky and Dean of the McDonough School of Business Paul Almeida, according to Chunky’s guardian.

“I emailed [Almeida], and he sent me an email back within 15 minutes. And basically he said, ‘You’re very creative. I love Chunky, I love his mission,’” Chunky’s guardian said. “So my goal at the end is to get Chunky to take a picture with [University President John J. DeGioia (CAS ’79, GRD ’95)].”

Clear about his goals, Chunky’s guardian hopes for mascot-like status for the toy by the end of the 2021-22 school year.

“I think my mission is just to kind of have Chunky be a recognized mascot and help to spread the love of Georgetown beyond the Hilltop,” Chunky’s guardian said.

“Because I think after this, education is going to change forever, and people are going to be more remote. So having the spirit of Georgetown — it’s going to need to have to expand beyond the zip code of 20057. We’re going to have to come up with more creative ways.”