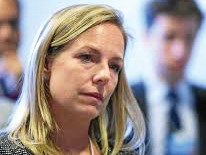 School of Foreign Service alumna Kirstjen Nielsen (SFS ’94) was nominated to lead the Department of Homeland Security on Wednesday.

A Virginia native, Nielsen attended the University of Virginia School of Law after graduating from Georgetown. If confirmed, she would be the first former employee of the DHS to lead the department since its formation in 2002.

In a Thursday press conference announcing Nielsen’s nomination, President Donald Trump said she has demonstrated wisdom and leadership in her roles at the DHS and the White House.

“During John Kelly’s time at DHS, right by his side was [Nielsen], the chief of staff for the department. He would be the first to tell you that she was critical to his success,” Trump said. “There, she quickly reinforced a sterling reputation as a dedicated leader whose number-one priority is always the safety and security of our country and our citizens, not politics or ideology.”

“I am excited to see that my former student Kirstjen Nielsen has been nominated to be Secretary of DHS,” Arend wrote in an email to The Hoya. “She was a student in my Constitutional Law of United States Foreign Relations class in the spring of 1994. This was obviously before DHS was created — but the class covered a number of subjects that relate to the work that DHS handles today.”

Nielsen is known to associates as a “no-nonsense player and a policy wonk,” though her “regimented style” has frustrated some senior White House officials accustomed to a freewheeling environment, The New York Times reported Wednesday.

Nielsen said serving as DHS secretary would be the “highest honor” of her life at the press conference Thursday.

“Since the department’s creation, I witnessed and continue to witness the dedication of these men and women, their professionalism, and their unwavering resolve to protect the nation.” Nielsen said. “I share the President’s profound commitment to the security of our country and the safety of the American people.”