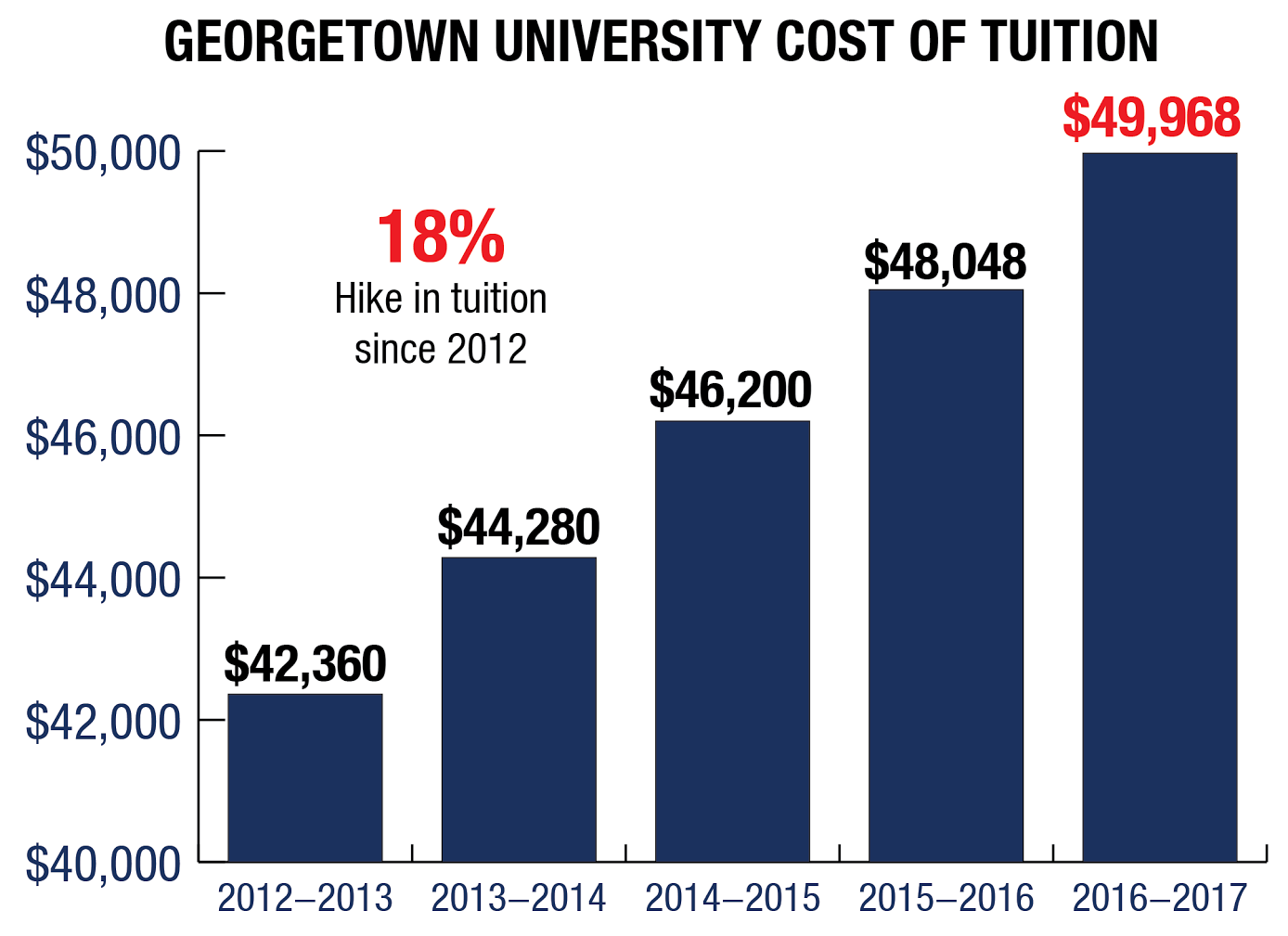 Tuition will rise 4 percent beginning this fall semester from $48,048 to $49,968, an increase which is being accompanied by the largest investment in financial aid in the university’s history, according to the Georgetown’s financial plan for fiscal years 2017 to 2020.

Tuition rates grew at a slower rate than last year’s 4.3 percent hike, and are anticipated to grow at a steady 4 percent for the next four years.

The financial plan, which was published by the Division of Financial Affairs on Jan. 27 and announced Feb. 16, lays out the university’s projected financial growth and estimates sources of income and anticipated expenditures.

The plan acknowledges the effect of the current national economic environment on projections for campus revenue and balances spending with a combination of increased tuition rates, graduate student enrollment and current-use gifts — donations that can be spent at the discretion of the university.

Dean of Student Financial Services Patricia McWade said middle-income families — those that make up to $100,000 a year — will feel the effects of the hike.

“Middle income is really tough. We do expect a lot of sacrifice on the part of middle income families, so we look at their income and assets and analyze what we think the family can afford to pay,” McWade said. “Families are different. Some families have saved and some have spent. The result is that middle-upper and middle-income families have quite a responsibility to pay for their son or daughter’s education.”

Dean of Undergraduate Admissions Charles Deacon (CAS ’64, GRD ’69) said the hike will also impact families not receiving any financial aid — the combined direct and indirect costs of tuition, room and board, travel expenses, books and other costs — which makes up the cost of attendance.

“It affects students based on their ability to pay. It should have no impact on students that are receiving financial aid, because it means they’ll just get more financial aid, unless their circumstances change,” Deacon said.

However, McWade said the tuition rate increase does not affect the school’s commitment to meeting full demonstrated financial need, and that students currently on financial aid should not be concerned.

“In the 25 years I’ve been here, we’ve been unwavering on [meeting full demonstrated financial need], so I don’t think students should be concerned about that,” McWade said. “If the tuition is going up, will the financial aid be going up? It will, because we meet full financial need.”

Georgetown is one of a few dozen colleges and universities — including Harvard, the University of Pennsylvania and Stanford University — that have prioritized need-blind, full-need admission policies since the late 1970s through a combination of loans, grants and work-study.

Georgetown University Student Association Vice President Chris Fisk (COL ’17) said students who are concerned about the increase should understand the context of the decision.

“Georgetown, rather remarkably, manages an incredibly difficult relationship between a tight financial situation and its commitment to meeting 100 percent of demonstrated need,” Fisk said. “It’s important to understand that this year’s tuition increase is also accompanied by the university’s aspirations to expand need-based financial aid.”

“Additionally, it’s important to point out that the rates of Georgetown’s annual tuition increases have been declining, and our student body has been successfully pushing the university to provide more services and to better our campus in a number of ways, like housing renovations, expanding academic programs, etc., but the money to do these things needs to come from somewhere,” Fisk said.

Even so, Fisk said administrators should allow students a larger role in determining expenses.

“With all that said, students should definitely have a more meaningful role in deciding where money is spent on campus,” Fisk said.