Summer: It’s a season filled with cookouts, beach trips and time by the pool. It’s also a season marked by the quintessential summer blockbuster. Action films with big explosions and even bigger budgets draw viewers to theaters en masse after the sun sets and the grill cools. Between The Avengers, Ridley Scott’s Prometheus and The Dark Knight Rises, viewers will have plenty of entertainment on the big screen this season.

But what about television?
Surprisingly, summer television holds its own. Programming may not have the same cache it has in the fall, but there are certainly a few gems worth watching. Take advantage of your free time this summer to catch up on some great shows.

In most television previews, critics are too broad and too passive. There’s just no way that you’re watching both “Game of Thrones” and “So You Think You Can Dance.”

There will definitely be quality summer shows that I will never see. Instead of trying to review these shows with no frame of reference, I’m going to stick to a few of my favorites.

If you’re going to watch only one show this summer, I guarantee that you won’t be disappointed with AMC’s “Breaking Bad.”

Creator Vince Gilligan (“The X-Files”) and AMC took a risk in 2008 when they debuted the show, which centers on high school chemistry teacher Walter White (Bryan Cranston). White, alongside his sidekick, Jesse Pinkman (Aaron Paul), becomes a methamphetamine drug lord to provide for his family after being diagnosed with late-stage lung cancer.

After four seasons, a lot of drama, a lot of meth and a lot of death, Walt’s still kicking. 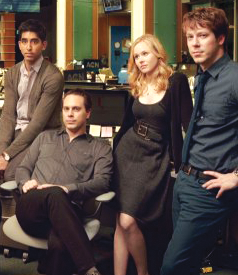 The fifth and final season premieres in July and will split 16 episodes over the next two summers. In a recent conversation with NPR’s Terry Gross, Gilligan detailed his desire to create a “character [who] starts off as a protagonist and gradually becomes the antagonist.”

At the end of season four, Walt has just made two power moves to eliminate his diabolical box-cutter-wielding boss, Gus, and an entire distribution network in Mexico. The threats that have dictated Walt’s actions for the past two seasons are gone, so where will Gilligan go next?
For viewers looking for something a little lighter, check out “Louie” on FX. Premiering its third season on June 28 at 10:30 p.m., “Louie” stars comedian Louis C.K. in my favorite comedy on air. “Louie” is almost exclusively C.K.’s own work as he writes, produces, directs and stars in the half-hour series.

Above all, “Louie” is real. C.K.’s humor is often brutally honest and interspersed with revealing reflections on growing up, relationships, suicide, homosexuality and religion.

Two other shows on my radar are HBO’s “Hard Knocks” and “The Newsroom.”

“Hard Knocks” is “The Real Housewives” for sports fans. It focuses on NFL players from a specific team, following them from training camp until their first game. Instead of manufactured drama, though, it’s set around a professional sports franchise with careers and millions of dollars on the line. The show was canned after last year’s lockout, but it’s slated to return this year, following the Arizona Cardinals from early August.

I don’t often recommend shows I’ve never seen, but “The Newsroom” has some big names and big potential. Written by Aaron Sorkin (The Social Network; Moneyball; “The West Wing”), it stars Jeff Daniels (Dumb and Dumber) as an outspoken member of a 24-hour news network. “The Newsroom” will premiere on June 24.

So if you have any down time this summer and don’t know how to spend it, odds are there’s a show out there you’ll really enjoy watching, even if it is “So You Think You Can Dance.”