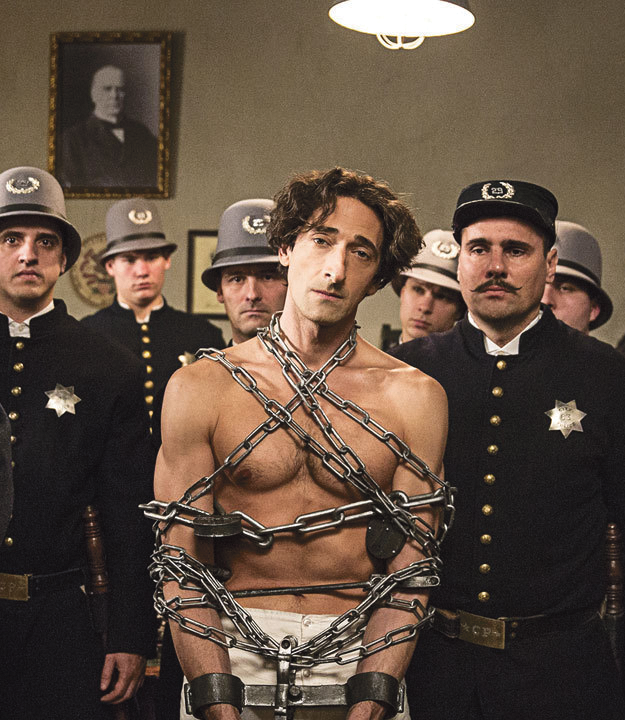 A scene opens on a tall bridge, a muscular yet gawky brunette man covered with chains, a frozen river with a small hole in the surface, a large crowd: There are plenty of things that could be happening here, but the opening scene of the History Channel’s newest fictional creation, “Houdini,” sets a tone that dominates the rest of this entertaining, yet eye-roll-inducing spectacle. According to the voice-over (because the only thing this scene was missing was a voice-over), “One way or another we all want to escape. An ordinary life shackles us. We need to get away: get away from boredom, from pain, from fear. But not me. Fear is how I know I’m alive. Unlike other people, I don’t escape life, I escape death. Hell of a way to make a living.”

“Houdini” represents one of the History Channel’s first forays into scripted fictionalized television, though the series is not its first departure from the types of documentary programming that made it famous. For a network populated with shows like “Ancient Aliens,” “American Pickers,” “Pawn Stars” and the entirely fictional series “Vikings,” “Houdini” seems like a step back toward, well, actual history. Houdini was a real man, the first international superstar to come from the American vaudeville circuit — a man known for his death-defying stunts and propensity for handcuffs and chains.

“Houdini” is a two-part biopic series, which means that it suffers from the same drawbacks that many biopic films do, but on a longer time scale. While a terrible biopic movie like Leonardo DiCaprio’s “J. Edgar” lasts only a little over two hours, “Houdini” ultimately spans closer to 4 hours, which, while giving the writers a lot more time to develop their well-known characters, also means they have lots and lots of time to fill with driving action and dialogue.

And this is where Houdini, for all its literal magic on screen, falls flat. The dialogue is really painful, and most of the actors struggle to bring any life into the dull script provided. Not that they don’t try. Adrien Brody, known for his Oscar-winning role in “The Pianist” and his steady position as one of Wes Anderson’s merry band of weirdos in films like “The Darjeeling Limited” and “The Grand Budapest Hotel,” really gives it his all. It is clear he takes acting seriously and that this subject is one he seems to care about, but even this earnestness can’t save “Houdini’s” awkward dialogue.

This kind of television show does have potential. Any student who has taken AP U.S. History in the last five years has probably seen clips of HBO’s foray into the genre — “John Adams,” starring Oscar winners Paul Giamatti and Laura Linney. It’s a formula that can work, but it’s also a formula that can quickly become a drawn-out and over-enunciated melodrama. “Houdini” also had a serious bevy of possible stories it could have told, but it instead went down a narrative path more at home among “Ancient Aliens” than a Ken Burns documentary.

There are many things we can definitively confirm Houdini was: a child of immigrants, a dedicated illusionist and a master of his death-defying craft. But what the History Channel instead decided to highlight was a highly unsubstantiated claim that he was recruited as a spy by MI5 during WWI. I’ve actually read some Houdini biographies in my day, and this miniseries was the first time I had ever seen the idea introduced.

For all these criticisms, it is impossible for me to say that I didn’t enjoy the miniseries. When it focused on what Houdini did best and how he did it, the dialogue didn’t matter. The visual medium allows the show’s creators to recreate exactly how Houdini was able to execute his stunts, and it is a testament to his talent and legacy that this knowledge makes his escapes even more impressive and makes the incident that lead to his early demise (hinted at heavily in the opening title sequence and throughout the program’s four hours) seem all the more impossible.

What is perhaps most appealing about this series is that, because it aired on the History Channel, it is available to view in its entirety for free on the channel’s website. So if you somehow find yourself with four hours to kill and a passing interest in the life of one of the greatest figures in early American popular culture, maybe give “Houdini” a try. Don’t let your expectations get too high, and you won’t be disappointed as the spectacle unfolds. Most importantly, don’t forget that just because it’s “the History Channel” doesn’t mean it’s all true.