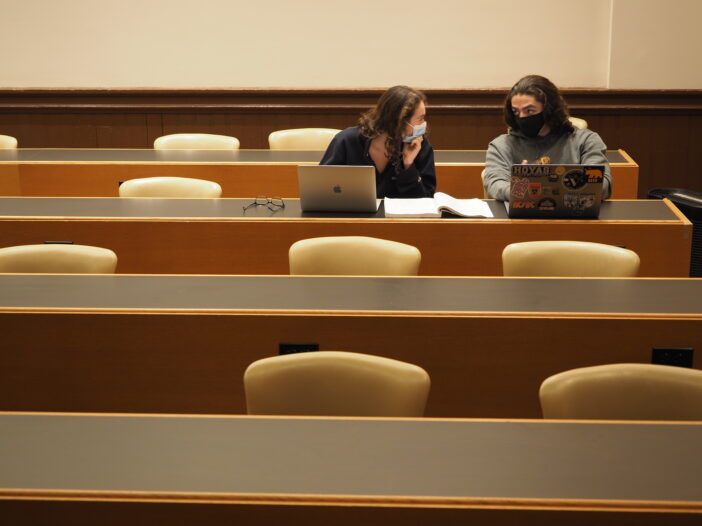 Twenty-one first-year students are vying for seven positions to represent the Class of 2025 in the GUSA Senate, and four candidates are competing for four at-large seats. The voting period for the election opened Nov. 4 at 10 p.m. and will close Nov. 6 at 11:55 p.m.

GUSA held a town hall Nov. 1 in which first-year candidates spoke about their campaign platforms and answered questions from students on topics including fostering a safe and healthy campus. Concerns about security arose following an intruder in New South on Sept. 19 and the administration’s failure to promptly notify the student body.

Alyssa Hirai (SFS ’24), who is running for an at-large seat, hopes to address campus safety by improving HOYAlert, the emergency notification system for campus safety threats.

“Students and parents deserve to know about threats to student safety on campus, not by word of mouth but from the school directly and in a more timely manner,” Hirai wrote in an email to The Hoya. “I plan to improve HOYAlerts to ensure the school notifies students when such incidents occur.”

Other candidates like Johnny Sussek (COL ’24), who is running for an at-large seat, seek to prioritize issues ranging from dining services to facilities management.

“Many students often get out of class, rehearsal, or practice at 9:30 p.m. and have nowhere to eat on a meal plan the University requires you purchase,” Sussek wrote in an email to The Hoya. “I will also advocate for an increase in funding for Residential Services to enhance the efficiency of completing dire work requests, such as mold remediation and air conditioning maintenance. These changes are critical and are reflective of students’ needs to maintain a healthy life on the hilltop.”

In addition to the senate elections, the ballot will also include a student referendum to restructure the GUSA Senate and executive. If approved, the GUSA Senate and executive will be combined into a single student advocacy assembly, which will be made up of various policy and advocacy committees. The referendum’s appearance on the ballot follows weeks of debate within the GUSA Senate over how the proposed referendum would impact the agency and responsibilities of the student government. GUSA held a separate town hall Thursday to answer student questions regarding the restructure and its implications.

Candidate Ella Lesher (COL ’25) supports the restructure referendum as part of her platform.

“The current hierarchical framework obstructs pathways of participation and widens the gap between GUSA and the student body,” Lesher wrote in an email to The Hoya. “I also believe that the overlap between branches adds unnecessary redundancy, and reconciling the efforts of the Senate and the Executive takes time away from critical work.”

Other first-year candidates are campaigning for social justice on campus. If elected, Sydney Abele (COL ’25) said she will use GUSA’s resources to support marginalized communities on campus and incorporate more identities in GUSA.

“I would love to see GUSA as a body of students who incorporates diversity on campus and in different groups on campus,” Abele wrote in an email to The Hoya. “As a member of the LGBT+ community I am very interested in representing that minority group in student government and also using GUSA’s outreach and allocation powers to foster diversity in campus organizations and student life.”