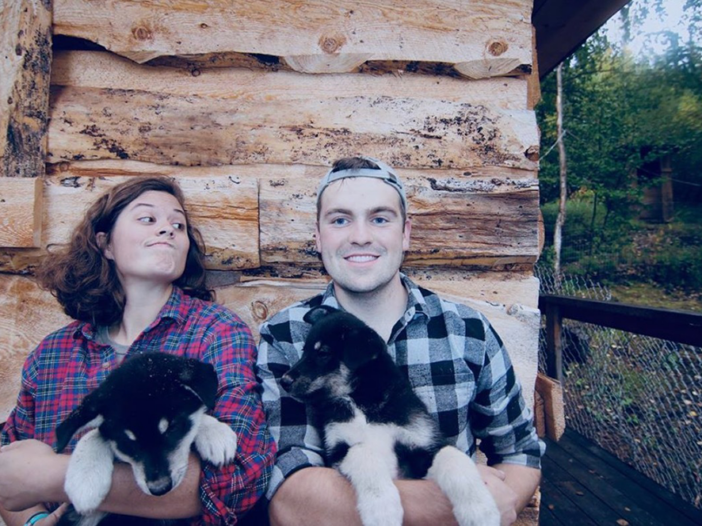 While most students spend their days hopping from Zoom to Zoom, Colton Scrudder (MSB ’22) and Maddox Angerhofer (SFS ’22) are learning a new routine: a 6 a.m. wake-up call to a kennel full of 60 dogs, a morning of running puppies through the woods, then an afternoon of maintenance work and scooping a whole lot of poop, all while living 157 miles from the nearest grocery store.

When Georgetown University announced its transition to a remote fall semester, Scrudder and Angerhofer, who first met their freshman year during GOPOP, a week-long pre-orientation hiking trip with Outdoor Education, began sending out job applications to dog sledding kennels. Five weeks ago, they found work at Wild and Free Mushing, a dog sledding team homestead in Eureka, Alaska.

“The best part of this semester has been daily hikes with the dogs and puppies,” Angerhofer wrote in an email to The Hoya. “Hiking here in Alaska is a bit different from what I’m used to, since there’s much more open, navigable country with spongy lichen that the puppies love to roll around in. The views are amazing and it’s all right in our backyard!”

Brent Sass, owner and operator of Wild and Free Mushing, is a three-time Yukon Quest champion and won fourth place in the Iditarod Trail Sled Dog Race last year, an annual 938-mile race across Alaska. In March, when the next race is planned, Sass is aiming for the Iditarod champion title, according to Scrudder.

Scrudder has learned a lot training a whole team of dogs bound for the Iditarod.

“I have two dogs at home, but it’s completely different when there’s 60 that are all trying to figure out their position and how they’re relating to other dogs,” Scrudder said in an interview with The Hoya.

Temperatures in Alaska are dropping, but until snow falls, Scrudder and Angerhofer drive the dogs from an ATV instead of a sled. It can be difficult to spot which puppies will one day make good sled dogs, but a solid team comprises dogs with focus, high energy and good attitudes, Scrudder said.

“We’ll walk until they basically are exhausted and then they get a little rest or nap and then back to running, since that’s how it’ll be when they’re adults racing in 1,000 mile races,” Scrudder said.

Living so far away from people they know, Scrudder and Angerhofer started an Instagram account, “Going Rogue Alaska,” and a blog to update their friends and family about their lives. Their most recent post from Sept. 19 catalogues Eureka’s changing seasons.

“When the freeze really sets in, daily operations will change drastically as we reign in our consumption of all sorts – water, fuel, electricity,” they wrote. “We’ll have a few weeks without snow, but even that will be shortlived (hopefully, since sledding requires snow!). Until then, dog runs look like heists – happening in the wee hours on four wheelers, in the limbo of a quick and fickle fall.”

Unlike Angerhofer, who worked with sled dogs in Minnesota during high school, Scrudder had no experience prior to arriving in Eureka. He first learned about the sport in third grade, when he was assigned to follow four-time Iditarod champion Jeff King’s progress across Alaska.

“Ever since that, I just thought it was the coolest job out there,” Scrudder said.

Despite having worked at a dogsledding lodge before, Angerhofer found Alaska full of surprises, and mud, too.

“Before coming to Alaska, I did not expect to spend literally every day in rain boots, but it’s been a wet season and we are always working in the mud and cold flowing creeks, so they have come to be my go-to shoes, even for hiking,” she wrote.

Scrudder and Angerhofer still do not know how long they will be in Alaska — their decision will be contingent upon Georgetown’s own spring plans, according to Scrudder.

Even in Eureka, they remember the Hilltop fondly.

“I miss the Potomac River a lot,” Angerhofer wrote. “I’m on the women’s lightweight rowing team at Georgetown, and while we have some beautiful creeks here in Alaska, there’s nothing like rowing down the Potomac past the monuments at sunrise.”