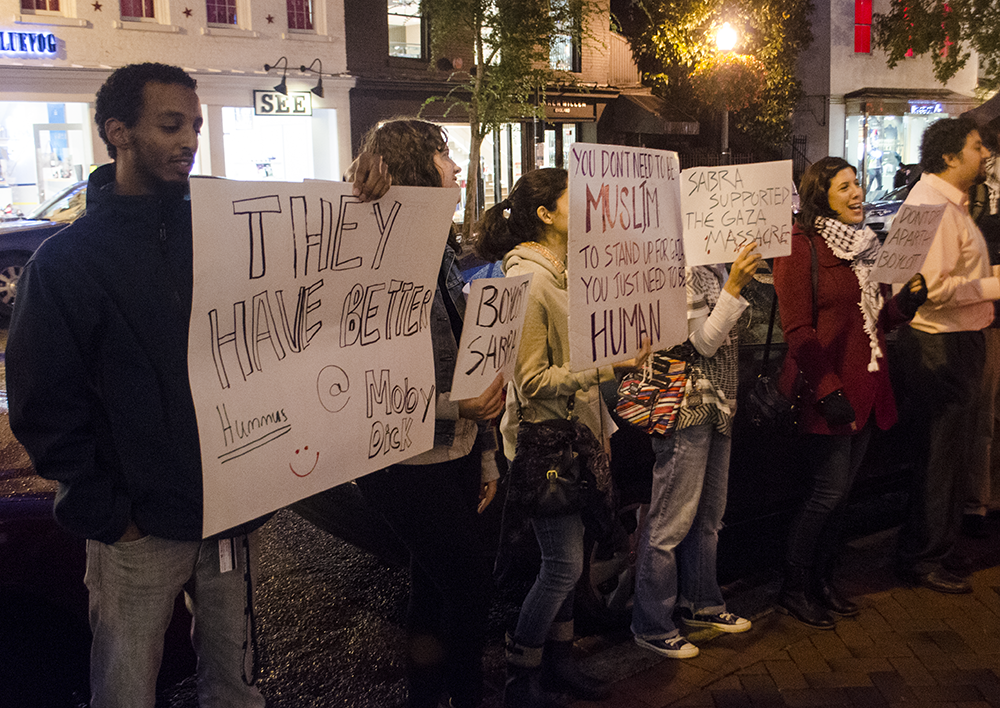 The University of California, Los Angeles’ undergraduate student government voted Tuesday night to pass a resolution calling the university to divest from American companies profiting from human rights violations in the West Bank and Gaza Strip, according to the Daily Bruin, prompting mixed reactions from Georgetown student groups.

Ari Goldstein (COL ’18), a member of the Georgetown Israel Alliance, voiced his disappointment with the results of UCLA’s divestment resolution.

“I was very saddened and frustrated to hear the news of what happened at UCLA. I think it’s far outside the scope of any student government jurisdiction to work on the Israeli-Palestinian conflict,” Goldstein said.

Mathieu Wiener (MSB ’16) decided to form a chapter of the national organization Students Supporting Israel at Georgetown on Nov. 22, partly in response to the UCLA resolution, expressing his disappointment as well.

“Speaking on behalf of SSI, as an organization that stands for pluralism and justice and public discourse, we are appalled and disgusted by the resolution that passed. The resolution only adds fuel to the fire because it demonizes and de-legitimizes the world’s sole Jewish state and alienates Israeli moderates who support peace with the Palestinians,” Wiener said.

Matt Martin (COL ’16), a member of Students for Justice in Palestine, however, expressed his support for UCLA’s decision and for the student government’s initiative.

“What’s great about UCLA’s student government voting to pressure the university to divest, is that it’s an example of students internalizing the responsibility we all have to hold groups contributing to human rights violations accountable,” Martin wrote in an email.

“It is the University of California, Los Angeles’ duty to uphold the True Bruin values of integrity, excellence, accountability and ethicality, respect for the rights and dignity of others, and promote public service that makes a positive impact in our global community, which includes the promotion of human rights, equality, and dignity for all people without distinction,” the resolution reads.

The resolution condemned companies said to violate human rights in Palestine, such as Hewlett-Packard Company for supplying Israeli military checkpoints with biometric identification which “restricted the freedom of movement of Palestinians,” General Electric for building engines for helicopters which are “systematically used in attacks on Palestinian civilians,” Caterpillar for “continually providing engineering tools and bulldozers routinely used in the demolition of Palestinian homes, as well as Cement Roadstone Holdings and Cemex for providing building materials toward means used to violate human rights.

Martin praised the Boycott, Divestment and Sanctions Campaign for calling for an end to these supposed human rights violations.

“The Boycott, Divestment, Sanction Campaign, is a direct call from the Palestinian Civil Society to pressure Israel to comply with international law and the Universal Declaration of Human Rights,” Martin wrote in an email.

Goldstein noted that although other countries have seen violence, Israel seems to be unfairly targeted in the media.

“And understandably, that makes Jewish and Israeli students feel they’re targeted, when their country is the only one in the world that’s attacked by groups, like the media,” he said.

He criticized the UCLA student government’s decision as divisive and unproductive.

“I think there are many legitimate views on how to best solve the [Israeli-Palestinian] conflict, but boycotting companies just because they’re Israeli is not one of them. It just serves to divide and destruct,” Goldstein said.

“As a fellow social justice campaign seeking to combat the injustices associated with fossil fuel companies, GU Fossil Free supports the tactic of divesting from companies that profit at the expense of human welfare. It is clear that human rights violations are taking place and we support divestment as a means of placing pressures on amoral corporate actors as well as a way to draw public attention to overlooked instances of injustice,” Lazarus wrote in an email.

Also a member of GU Fossil Free, Goldstein said that the goals of the two groups, although both pushing for divestment, are fundamentally different in nature.

“Fossil flow divestment is a zero-sum situation, but the Israeli-Palestinian conflict is far from zero-sum,” Goldstein said.

In 2010, the Georgetown Solidarity Committee and Students for Justice in Palestine formed Georgetown, Divest!, a coalition of students calling for the university to divest from companies that are said to profit from human rights violations in Israel and Palestine.

LaMarr Billups, the Assistant Vice President for Business Policy and Planning at the time, rejected Georgetown, Divest!’s call for reform.

“At that meeting you asked if Georgetown University would divest from managed funds that own stocks in certain companies that do business with Israel. The answer to that question is no,” Billups wrote in April 2010.

Georgetown, Divest! has since been dissolved.

Part of the Boycott, Divestment and Sanctions Movement, a global campaign aiming to end Israeli occupation and colonization of Palestinian land, establish equal rights for Arab-Palestinian citizens of Israel and permit the return of Palestinian refugees, the boycott petition called for signatories to not publish in Israeli academic journals, teach at Israeli institutions, attend any conferences at Israeli universities or collaborate on projects with Israeli universities.

“The recent resolution of the American Studies Association endorsing a boycott of Israeli universities undermines the academic freedom that is essential to the mission of the Academy,” DeGioia said in a statement. “As an academic institution, it is Georgetown’s responsibility to deepen engagement and foster dialogue between scholars and societies to enhance the entire global academic community.”

The U.S. Campaign to End the Israeli Occupation organized the demonstration to protest Sabra’s relationship with the Strauss Group, an Israeli food company that has served the Golani Brigade of the Israeli army, which co-owns the hummus company.