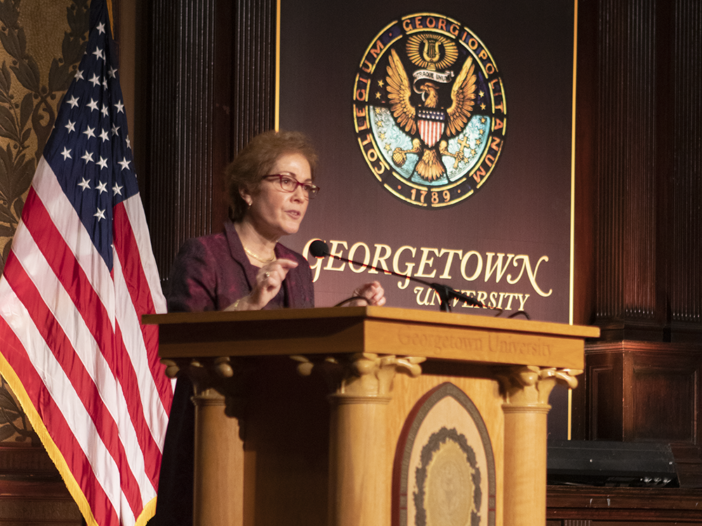 In her first public appearance since testifying in the impeachment hearings of President Donald Trump in November, former Ambassador to Ukraine Marie Yovanovitch received an award for diplomatic excellence and called on young people to join the foreign service at a ceremony Wednesday.

Yovanovitch received the 2020 J. Raymond “Jit” Trainor Award for Excellence in the Conduct of Diplomacy at the Feb. 12 event in Gaston Hall. Yovanovitch, who served as U.S. ambassador to Ukraine from 2016 to 2019, testified at the impeachment hearing Oct. 11 that Trump targeted her for removal.

Yovanovitch said she was removed as part of an organized attempt to persuade Ukrainian President Volodymyr Zelensky to investigate the family of Trump’s political opponent former Vice President Joe Biden. Biden’s son Hunter served on the board of the Ukrainian gas company Burisma from 2014 until the beginning of 2019.

On Feb. 13, Trump admitted that he asked his personal attorney Rudy Giuliani to travel to Ukraine to gather damaging information about his political rivals, which he had repeatedly denied during the impeachment inquiry, according to CNN.

Despite the divisiveness of the impeachment process, it has brought renewed attention to Ukrainian foreign policy, which Yovanovitch hopes will be beneficial for both nations.

Although Yovanovitch briefly mentioned her impeachment testimony, she urged young people to join the foreign service and called for state department reform for most of her address.

Political leaders must reform global institutions, but they should adhere to their founding tenets of service and truth to survive, according to Yovanovitch.

“Without a doubt, our international institutions need a reboot, but they don’t need the boot. We need to reform them, to accommodate the challenges,” Yovanovitch said. “But the principles upon which they were established remain our true north: rule of law, generosity of spirit, an understanding that we are stronger together, and a commitment to bring us resources on the line together for others, to make the world a more democratic, more prosperous, more secure place.”

Building international relationships through diplomacy is one of the most valuable techniques for conducting foreign policy, Yovanovitch said.

“The quiet work of diplomacy can be more effective, and less resource intensive, then just about any other tool in the governmental toolkit,” Yovanovitch said. “It sounds so old fashioned in our high-tech world, but diplomacy is that human interaction, and creating relationships of trust is more important than ever. It’s not as exciting as sending in the marines, but it’s cheaper and usually more effective.”

The ceremony was hosted by the Trustees of the Tainor Endowment and the Institute for the Study of Diplomacy, a program in the School of Foreign Service that offers a certificate in diplomatic studies. Yovanovitch joined the ISD as a senior state department fellow after she left her ambassadorship in 2019.

Yovanovitch’s decision to enter the national spotlight after deciding to testify as part of the house impeachment inquiry displays courage under pressure and political opposition, according to Tom Pickering, chair of the ISD and an introductory speaker at the event.

“This was never easy, and now in this particularly tense and fraught time of a clear schism in the American political life, she made the choice of her oath,” Pickering said. “In that regard, her courage in coming forward, her being the first to testify in the house, her dignity on the platform through long periods of stressful questioning was a remarkable example of bravery, not just intellectually but physically.”

All foreign service officials should strive to embody Yovanovitch’s bravery and commitment to her country, according to former Secretary of State Madeleine Albright, whose prepared introductory remarks were read by ISD Director Barbara Bodine.

“At a difficult moment in our country’s history, Ambassador Yovanovitch was called upon to speak the truth. In doing so, she demonstrated to the American people and the world the finest quality one can hope for in a foreign service officer: courage, honesty, and a deep devotion to the constitution,” Albright wrote. “Ambassador Yovanovitch has inspired me, but more importantly, she has inspired a new generation, including the students at the School of Foreign Service, and at Georgetown University, to follow the example of public service she has set.”