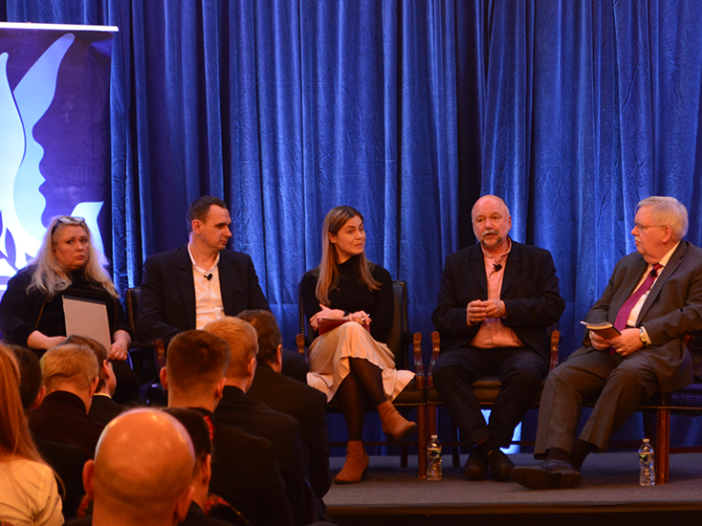 Crimea has been a center of conflict between Ukrainians and Russians since the 2014 Ukranian revolution in Kyiv that resulted in the removal of pro-Moscow Ukranian President Viktor Yanukovych. Following Yanukovych’s removal, Russian President Vladimir Putin called on the Russian Federation to annex the Autonomous Republic of Crimea, officially a part of Ukraine, citing pro-Russian sentiments in the region.

The conflict has created more than 10,000 civilian casualties and displaced an estimated 1.5 million within the region, according to the Council on Foreign Relations’ Global Conflict Tracker. The ongoing hostilities in Crimea has persisted into 2020 and continues to cause casualties, according to Sentsov.

“Six years. For six years they’ve been fighting and the fight is still going on,” Sentsov said. “14,000 people perished; that is too much. And the war is ongoing and is not ending.”

The conflict has also seen an increase in human rights violations in Crimea, such as the forced enlistment of Crimean citizens in the Russian armed forces, with those who oppose the draft facing criminal charges, according to the Human Rights Watch.

Given the persistent conflict in Crimea, Ukrainians and Crimeans should unite to preserve Ukraine and fight for their freedom, according to novelist and President of PEN Ukraine Andrey Kurkov, who was one of the other panelists.

“In Ukraine, freedom is more important than loyalty,” Kurkov said. “Ukrainians from different regions should find the balance between respect and love for freedom, and somebody else’s opinion and loyalty to their country, because only when the country is in danger do Ukrainians unite, because they understand they can not only lose their country, they can lose their freedom.”

The event, titled “Fighting for Human Rights in Crimea,” was co-sponsored by the Georgetown Institute for Women, Peace and Security, PEN America, the U.S.-Ukraine Foundation and the Center for Eurasian, Russian and East European Studies. The panel included Sentsov, Kurkov and Ukranian civic activist and journalist Maria Tomak. The panel was moderated by former U.S. Ambassador to Lithuania, Georgia, Ukraine, and Russia John Tefft (GRD ’78).

Sentsov, who was vocal in his opposition to the Russian takeover of his native Crimea, was detained in May 2014 by Russian authorities and sentenced to 20 years in a Russian prison on terrorism charges in August 2015. He was released from a Russian penal colony in September 2019 after five years of detention.

Sentsov was awarded the 2017 PEN/Barbey Freedom to Write Award, which is an award that seeks to end the persecution of authors and defend free expression by honoring writers who have been imprisoned for their work. Sentsov’s imprisonment tested his integrity and loyalty to the Ukrainian cause, according to Sentsov.

“A person never knows how resilient his endurance is and what he’s capable of until he finds himself in a complicated situation. When he is faced with a choice of whether to fight for his dignity and for his country or to surrender,” Sentsov said. “What prison teaches you is patience to preserve your personality to preserve yourself as a person and not to break and to just live through it, overcome.”

In December 2019, Putin defended rebel, pro-Russian leaders in Ukraine after the Ukrainian government denounced the rebels’ claim to independence as illegal, according to the BBC.  The annexation of and continued war over Crimea is a strategic move by Putin to expand Russian territory and to regain regions formerly controlled by the Soviet Union, Sentsov said.

Sentsov said the referendum was not conducted in accordance with Ukranian law and international standards, and pressure from Russia likely played a role in the passing of the referendum.

“To that fake referendum that was conducted over there, no referendum can be conducted when the gun is pointed at your temple and under the knife of the foreign army,” Sentsov said. “So, I do not believe the results of the referendum.”