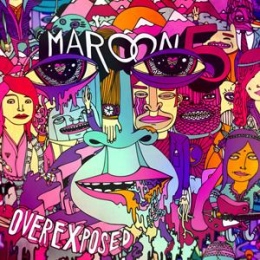 I have been a Maroon 5 fan since the age of 13, when I first heard their masterful debut album, Songs About Jane. I’ve seen them twice in concert, own a lot of Maroon 5 paraphernalia and know way too many weird facts about the band’s history. I like to think that I’m just below the “fanatic” level. But unfortunately, my preexisting fandom and lofty expectations led me to disappointment upon the release of their fifth album, Overexposed.

Maroon 5 has been in the music business since 2002, but they recently underwent some pretty extensive changes. Lead singer Adam Levine took a new gig as a judge on NBC’s “The Voice,” and keyboardist Jesse Carmichael decided to take a brief hiatus from music to finish his college degree. The group seems to be trucking along, though: To fill Carmichael’s void, they temporarily signed PJ Morton, a rhythm-and-blues artist by trade. After falling in love with Morton’s groovy number “Heavy,” which features Levine on vocals, I thought for sure that the group would maintain the standard that they’d set with their previous records in their newest album.

Though not a bad album, Overexposed is composed of mostly pop tracks that fail to demonstrate the band’s musical talents. I could easily imagine each song on a top-40 radio station — in fact, “Payphone,” featuring Wiz Khalifa, has already topped summer charts for this year. Don’t get me wrong: Some of the tunes are quite catchy. The most danceable songs are “Lucky Strike” and “Doin’ Dirt.”

Regardless of the sub-par popular music, if I had to guess, the crew had fun playing around with different genres. And maybe that’s important to the five at this point in their careers. “One More Night” even has some hints of reggae; their cover of “Kiss” is a fantastic cover of the pop classic jam with a rock and roll spin that gives it a unique sound. As a whole, the album sounds like a cool new hit mix, but it’s rather sporadic display of styles don’t show any continuity.

To my disappointment, most of the tracks incorporate techno music and dance beats, rather than the lovable guitar, drum and piano talent that I know that the band posesses. Despite Levine’s distinct vocal and lyrical abilities, Overexposed could have been written by just about any pop artist. The unoriginality is disenchanting.

When I listen to Songs About Jane (which I do often and on repeat), I get the sense that I truly know Levine and the rest of the band. I feel pleasure, frustration and pain in every song. In their subsequent releases — It Won’t Be Soon Before Long, The B-Side Collection and Hands All Over — I hear the pride and dedication conveyed in each track.

Though this album will probably be well received by the top-40 charts, I still think the band could and should return to their roots. My favorite song on the album is “Sad,” which is a lonely ballad featuring just Levine and a piano. It’s beautifully honest and tragic, as its name suggests. But it’s also the only song where I really believe Levine when he sings. I’m disappointed that there’s only one of these gems on the entire album, but at least there is one on this otherwise manufactured album.

I’ll still be jamming along to Overexposed when I undoubtedly find its songs on the radio. The album is catchy and relatable, making it average pop music. It’s not a bad album, but it doesn’t seem to belong with the great music Maroon 5 has produced in the past. It feels like the band intended Overexposed to be a crowd pleaser, rather than music they’ve made for the love of the craft. I only hope this won’t be the band’s last album before Levine settles down (I hear he’s keeping busy with Victoria’s Secret models at the moment), and maybe next time, the group will return to their previous standard.