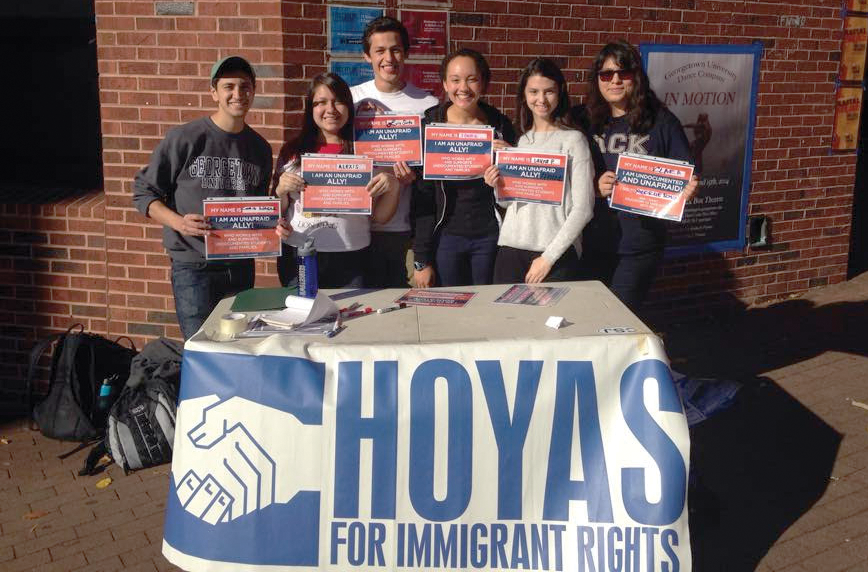 A petition urging the university to hire a full-time coordinator for students without documentation  has amassed 721 signatures from members of the Georgetown community as of press time.

Student advocacy group UndocuHoyas launched the petition Nov. 1 in coordination with Hoyas for Immigrant Rights, which represents immigrant students at Georgetown. It aims to bridge a gap between the administration’s Undocumneted Students Task Force and students without documentation at Georgetown.

The university established the Undocumented Students Task Force in the summer of 2015 to address issues related to students without documentation. The task force is composed of faculty, financial aid staff, deans and members of the religious community.

The work of the task force culminated in the institutionalization of resources in a support website that was launched April 7.

“Though we appreciate the support we have received from the university so far, we find it imperative to hire a coordinator to help direct students to the correct resources and to help UndocuHoyas find their home on the Hilltop,” the petition reads.

The online petition, which will be delivered to Vice President for Student Affairs Todd Olson, will remain open for signatures until December, when the Office of Student Affairs is due to discuss the budget for the 2017-18 fiscal year, in time to hire the coordinator for the next academic year.

The university has not had a liaison between undocumented students and the administration since December 2015, when part-time liason Cinthya Salazar left to pursue a doctorate degree at the University of Maryland.

Olson said he and Associate Dean of Students Dennis Williams have been working to identify a candidate to liaise between the university and students without documentation.

“Dean Dennis Williams and I have been meeting with students on this, the concerns raised are being carefully considered, and we are actively working to identify a point person to coordinate our support for undocumented students,” Olson wrote in an email to The Hoya. “We care about these experiences and the needs of these students, and we are committed to supporting them.”

“This position is essential to guarantee not only the well-being but also the overall success of undocumented students on campus. We need someone to be there that we can go to express our concerns and express our feelings and would actively advocate and fight for us at the institutional level,” Mejía Orta said.

Students without documentation originally met with Olson on Oct. 20 to address the need for a coordinator in a meeting facilitated by the Georgetown University Student Association.

“We heard loud and clear that this is something they needed, and immediately we jumped on convening those students to talk to key administrators about those issues,” GUSA Vice President Chris Fisk (COL ’17) said. “At that meeting, administrators were very receptive to the need, so our role moving forward is pushing the end as much as we can and holding administrators accountable.”

The policy team has been focused on reconvening the task force following a summer hiatus, pushing for the undocumented student coordinator position and creating connections within the community.

Josué Coronado (COL ’18), who lives in Casa Latina, a living learning community for Latinx students, said education on issues surrounding Georgetown students without documentation must be brought to the forefront.

Mejía Orta said students without documentation have missed having Salazar as a liaison with the university.

“She was really the force of support I found here at Georgetown, and after her transition out of the school, there definitely was this disconnection between the undocumented community as a whole,” Mejía Orta said.

A coordinator for undocumented students is crucial in raising greater awareness for issues affecting students without documentation especially given the current political climate, according to Casa Latina resident Citlalli Velasquez (COL ’17).

“What’s scary is that we don’t know what’s going to happen,” Velasquez said. “It’s the moment where we need to support each other, but undocumented people are on the frontline. If you’re not a citizen, you’re not considered a human.”

Mizraim Belman Guerrero (SFS ’20), a student without documentation, said there is hope to be found in the communal aspect of the conversation surrounding immigration.

“I think we’re all proud of being such a close-knit community here at Georgetown, and I think we should always take care of one another. I think every student should have that opportunity to thrive, and this is a community that faces unique challenges,” Belman Guerrero said.