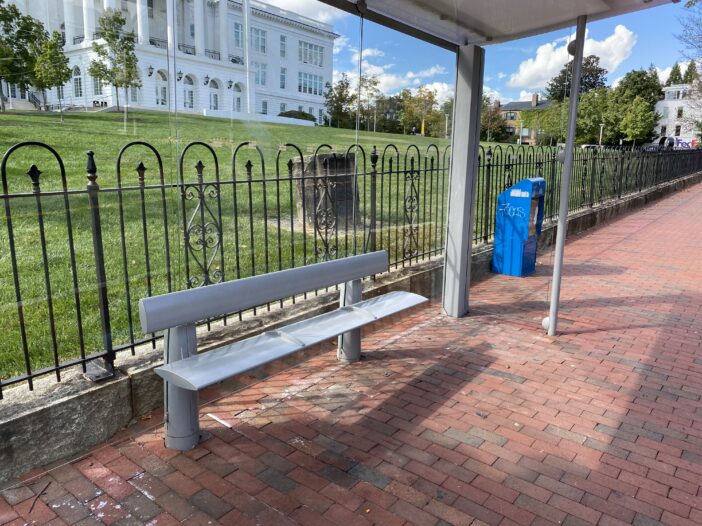 This article is part of our 2021 contribution to the D.C. Homeless Crisis Reporting Project in collaboration with other local newsrooms. The collective works will be published throughout the day at DCHomelessCrisis.press.

Hostile architecture blocks unhoused people from sleeping and using bathrooms, among other necessities, throughout the Georgetown neighborhood.

Examples of hostile architecture include park benches with partitions that make it impossible for someone to lie down and sleep or metal spikes on a heating grate that prevent people from sitting or lying on it to warm themselves. In an effort to contribute to existing documentation of hostile architecture throughout Washington, D.C., The Hoya identified multiple instances of anti-homeless design in the Georgetown neighborhood.

In 2018, students at American University debuted a project called Hidden Hostility DC, which documents over 70 instances of hostile architecture throughout Washington, D.C. on an interactive map. However, student contributors did not have the capacity to track all the hostile architecture in the District, including the Georgetown neighborhood, according to Asia Cutforth, an undergraduate contributor to the project. The Hoya located slanted heating grates, benches not designed for sleeping and a lack of public amenities — such as public restrooms — in the Georgetown neighborhood, specifically along Wisconsin Avenue and near the Georgetown Waterfront.

“When you google the companies that are marketing these benches, sometimes they’re marketed as anti-vagrant benches,” Stevenson said in a phone interview with The Hoya. “Then it becomes very clear what the intent is.”

The Hoya also located a heating grate at a 45-degree angle near the intersection of Wisconsin Avenue and M Street, which prevents people from sitting or lying on the grates. In cold weather, heating grates can provide lifesaving warmth for those at risk for hypothermia.

Throughout the Georgetown neighborhood, and particularly between O Street and Glover Park, The Hoya also identified that WMATA Metrobus stops along Wisconsin Avenue as well on 35th Street that have slanted metal benches preventing people from lying down unsupported.

WMATA did not respond to The Hoya’s request for comment.

According to Ward 2 Council of the District of Columbia Councilmember Brooke Pinto (LAW ’17), resources for unhoused people throughout the District are lacking.

“The challenge of homelessness in DC is not new and the causes are myriad — lack of affordable housing, mental health challenges, and domestic violence among others,” Pinto wrote in an email to The Hoya. “The need for increased and stronger homelessness supports were made even more clear to us during the pandemic.”

According to Julie Turner, senior outreach worker for the Downtown Cluster of Congregations Homeless Services Unit, hostile architecture is inhumane and takes away both dignity and comfort from people experiencing homelessness who already face daily hardships.

Hostile architecture is typically noticeable in public, highly populated areas, according to Uwe Brandes, faculty director of the urban and regional planning master’s program at the Georgetown University School of Continuing Studies.

“These conditions are generally seen in areas that receive heavy foot traffic and typically are in places where there are pedestrian plazas and parks,” Brandes said in a Zoom interview with The Hoya.

According to Turner, when urban planners and architects implement hostile architecture, they are focusing on preserving the aesthetic, affluence and appeal of a neighborhood at the expense of unhoused individuals’ humanity and dignity.

“I am convinced this is not a result of a broken system; quite the contrary,” Turner wrote in an email to The Hoya. “This is a carefully crafted system that keeps the rich, rich, neighbors white and affluent, and offers them an aesthetic they can feel comfortable living with.”

A subset of hostile architecture are ghost amenities, or the absence of resources in a public space. Examples include a lack of benches, tables and restrooms in public areas, many of which are services that people experiencing homelessness rely on for comfort and survival.

Although the District has public spaces that could house public amenities, ghost amenities are rampant, with the exception of the National Mall, according to Cutforth.

Ghost amenities in Georgetown include the area’s lack of public restrooms in parks and other gathering spaces. There is only one public park restroom in all of Georgetown, located in Montrose Park, according to Google Maps.

According to Turner, hostile architecture accomplishes no goal other than preventing people experiencing homelessness from sleeping and resting.

“Everyone in the District of Columbia who’s homeless should have a place to sleep,” Turner said.