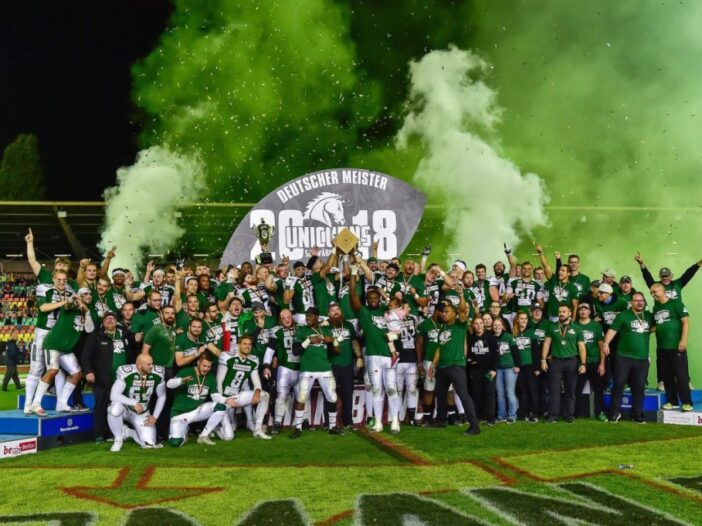 Thanks to two former Hoyas, American football may not only be American for much longer.

Former Georgetown University football players Nick Alfieri (MSB ’15) and Brent Craft (MSB ’08) are taking the international side of the sport to the big screen, jointly producing a documentary about the little-known German Football League (GFL). The film, “Unicorn Town,” tracks the story of American football players on a small-market German team called the Schwäbisch Hall Unicorns.

Calling them a small-market team might even be an understatement.

Schwäbisch Hall plays at Optima Sportpark, an artificial turf field in southern Germany with a seating capacity smaller than Georgetown’s Cooper Field. With the rest of the league’s teams pouring in money and surpassing them in wins, the team needs to find a way to rise to prominence despite their struggles. Thankfully, the strong culture and leadership lessons from their international players’ football careers give them a fighting chance to thrive in the GFL. Craft and Alfieri detail this attempt to keep up in Germany through “Unicorn Town.”

Before they made films, though, Craft and Alfieri excelled on and off the field on the Hilltop.

Craft played offense and special teams for the Hoyas in 2004, 2006 and 2007. Though he didn’t see the field in his first season, he saw action in every game of his sophomore year as a gunner before eventually working his way up to lead Georgetown’s receiving corps in catches and receiving yards as a junior in 2006.

For his part, Alfieri contributed on the one side of the ball Craft did not play: defense. From 2011 to 2014, Alfieri was a team captain and All-Patriot League Second Team defensive player for the Hoyas. He made history on the field, becoming the third player in Georgetown football history to eclipse the 300-tackle mark in his college career. Beyond that, too, his character earned him the prestige of wearing the No. 35 Joe Eacobacci Memorial Jersey in 2014.

Craft recalled how Alfieri’s No. 35 jersey helped them meet each other post-graduation.

“We met through the Georgetown football program, and I saw that Nick was a captain on the team and wore No. 35, which symbolized what his character was,” Craft told The Hoya in a Zoom interview. “I knew he was a good guy and said, ‘okay, he’s doing a bunch of interesting film work around the football program.’ That’s how we initially got in touch.”

With their new connection, Craft and Alfieri immediately got to work making films. Their first movie together was the 2017 comedy “Lady-Like,” which told the story of a college student facing adulthood. The film enjoyed immediate success, as Craft was awarded Best First Time Director at the Sunscreen Festival in Tampa Bay after it accepted the movie.

Speaking about their joint journey from football to filmmaking, both of the former Hoyas recalled Georgetown football Head Coach Rob Sgarlata’s (COL ’94, GRD ’12) “4-for-40” motto, which instills into players that their four years at Georgetown will set them up for the next 40 years of their lives.

Sgarlata commented on the significance of that motto.

“For us, it’s about magis, it’s about the 1% and getting that much better each day. That 4-for-40 journey is all those things and it’s not just athletically-based,” Sgarlata told The Hoya in a Zoom interview. “Your four years here and all the experiences that encompasses — on the field, off the field, social, jobs. All the good things, all the tough things, all the things you have to fight through, those should set you up for success.”

Those lessons prepared Craft and Alfieri to tell the story of the Unicorns’ adversity, which encompassed everything from financial struggles to a lack of recognition.

Alfieri discussed the similarities between what he learned as a Hoya and the emotions he sought to evoke through this latest project.

“The themes in the documentary we touch on are stuff we had at Georgetown: fighting against adversity and not giving up in the face of adversity, which I think is a major theme of the documentary, so hopefully that’s something people are able to take away.”

Now, Alfieri and Craft are sharing this theme, their small team and its big lessons with the world. “Unicorn Town,” which already earned an IMDb user rating of 9.1/10, is available on the streaming services Amazon Prime Video, Google Play, iTunes and Vudu.