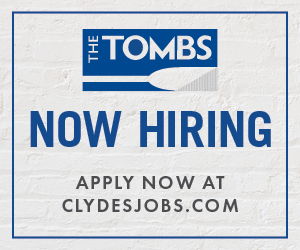 Jack Buckley (MSB ’22) was standing outside the restaurant Clyde’s of Georgetown on M Street two weeks ago when he felt something suddenly hit the side of his body.

To his surprise, it was a raw egg, splattered all over his clothes.

The attack took place shortly after 11 p.m. on Aug. 26, according to Buckley, who said the unidentified perpetrator threw the egg out of the passenger side of a car window while driving past the restaurant. Buckley was not seriously injured, and he told The Hoya that amid the confusion, he was unable to identify the egger before they sped away in a red sedan.

“I was drenched in egg yolk,” Buckley said in an interview with The Hoya.

Clyde’s could not provide footage from their security cameras by the time of publication.

Buckley is not the only person who has recently gotten egged in the Georgetown neighborhood. Since June, The Hoya has verified at least six separate egging incidents, five of which have occurred in the last two weeks. Students and community members alike have become victims of these eggings.

A more recent egging attack took place Sept. 2 outside Foxtrot Market on Wisconsin Avenue in Georgetown. Just before 9:15 p.m., Bobby Smallman (COL ’24) was sitting at a table outside the market when something flew past him, grazing his neck. He was shocked to realize it was a raw egg when it landed on the sidewalk nearby.

The egg left a minor scrape, according to Smallman, who also witnessed a red sedan driving away after the attack.

Smallman said he was surprised by the ambush.

“I was just totally shocked. It didn’t even occur to me that I could get egged,” Smallman said in an interview with The Hoya.

Smallman said he wishes he could have identified his attacker.

“If I was picking a way to get egged, I think I’d rather see the person who egged me, to look him in the eyes,” Smallman said.

A few minutes after Smallman was egged, Ben Finkelstein, a senior at Georgetown Day School, was also egged about four blocks up Wisconsin Avenue from Foxtrot.

“It was just a wow-I-really-just-got-egged type of moment,” Finkelstein said in a phone interview with The Hoya.

On top of the Georgetown University students, Adam Veldman (SFS ’22), a host at the restaurant Clyde’s, reported to The Hoya that at least two people have also gotten egged on two separate occasions near the restaurant since the beginning of the fall semester.

Some Georgetown students have taken it upon themselves to identify the perpetrator.

Jane MacRae (MSB ’23), a friend of Smallman’s, helped organize a stakeout at Foxtrot Market the night of Sept. 9 in hopes of identifying the perpetrator. Six Georgetown students, including Smallman and MacRae, attended.

Although some students have found the situation comical, egging can have severe consequences. In some cases, egging has seriously injured people, including leaving some egging victims blinded. Bacteria in raw eggs, like salmonella, also presents the risk of illness. At minimum, perpetrators who egg other people can be charged with simple assault, according to Brianna Burch, a public affairs specialist at the Metropolitan Police Department.

Cities only thrive when there is basic respect for each other, according to Advisory Neighborhood Commission 2E Commissioner Kishan Putta.

Students in the neighborhood should take safety precautions, including avoiding walking alone at night and requesting a SafeRides safety shuttle; the university is also in contact with the Metropolitan Police Department, a university spokesperson told The Hoya.

“We take these reports very seriously and urge any member of the Georgetown community who has been the victim of this, or any other criminal act, to report them to GUPD or reach out to the Metropolitan Police Department,” the university spokesperson wrote in an email to The Hoya.

“This isn’t an isolated event. We need to do something,” Smallman said.