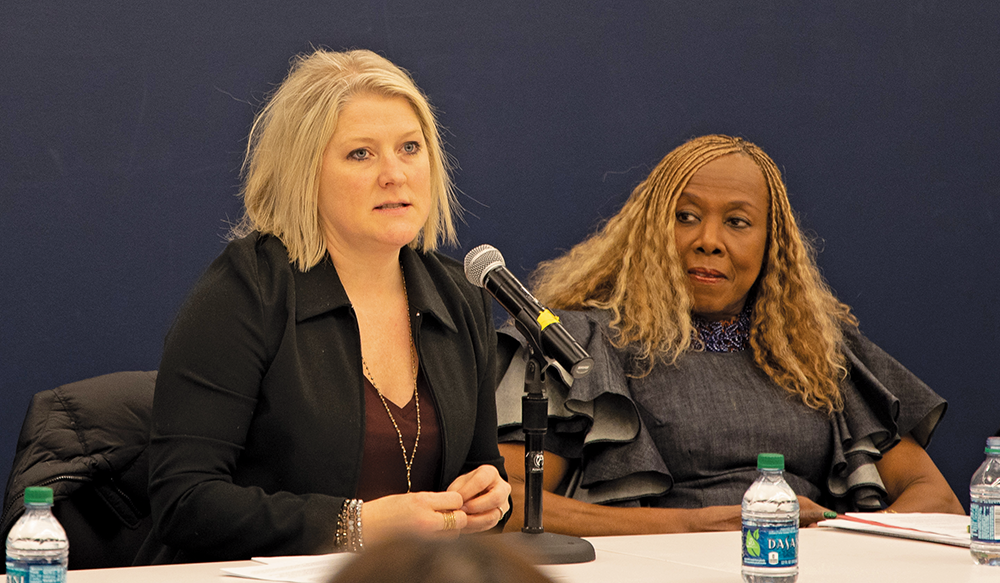 On Nov. 16, the U.S. Department of Education released proposed changes to Title IX regulations that include the redefinition of sexual harassment under Title IX and raising the standard of proof necessary in Title IX hearings.

In response Georgetown hosted 10 in-person feedback sessions across its campuses in Washington, D.C., between Dec. 3 and 19 to provide a forum for students to voice their thoughts on the Department of Education’s proposed changes to Title IX regulations.

The feedback sessions, however, left many students uncertain of how the university would respond to their concerns, according to STAIV member Fiona Singer (SFS ’20). The university’s ambiguity has led STAIV to seek another forum to clarify how the university intends to proceed.

“We felt that creating a forum where STAIV would be able to ask and follow up on a lot of the topics and issues that were raised in the listening sessions would be a really valuable tool for the work that we’re interested in pursuing,” Singer said in an interview with The Hoya.

Georgetown plans on opposing the proposed changes in the proposed regulations for limiting action the university can take against sexual assaulters on campus, according to Olson.

“We believe that Title IX coordinators should be able to proceed with a complaint when there are multiple reports against the same respondent without requiring the individuals to be cross-examined,” Olson said. “We believe that we need to act when we know as an institution, or reasonably should know.”

The proposed Title IX regulations would treat educational institutions like courts of law to the detriment of survivors of sexual assault at Georgetown, according to Olson.

“We care deeply at Georgetown about fair grievance procedures,” Olson said. “By narrowing the definition of sexual harassment and by requiring colleges to implement courtroom-like procedures, we believe the proposed regulations will deter reporting, will allow misconduct to go unaddressed, and will make students feel less safe and be less safe.”

The new definition requires  “severe, pervasive and objectively offensive” conduct to be perceived as sexual harassment, whereas the previous definition only required one of the three conditions. The Education Department’s proposal also mandates that investigations of formal complaints be held to a higher legal standard of proof, which would make taking disciplinary action against accused students harder for universities. The previous standard used in Title IX hearings required only that the alleged action more likely than not took place, while the new standard requires “clear and convincing” evidence that a violation occurred.

Multiple students present at the feedback sessions and at the town hall expressed concern over the new definition of “sexual harassment” as well as the introduction of proposed regulations requiring cross-examination of accused students and survivors as well as the higher standard of proof.

The university hopes to finish its draft of comments to the regulations by the middle of next week, according to Kilkenny. The comment period for the proposed Title IX regulations ends on Jan. 28.

STAIV member Emma Oechsner (COL ’21) said the group still feels the administration’s response is lacking, as Georgetown has not yet published its formal comment. Administrators promised students they would have the opportunity to read before it is submitted to the Education Department.

Students have also criticized Georgetown for its handling of recent cases of sexual misconduct on campus. Students wrote an Aug. 31 letter criticizing the university for having Berner serve as both a Title IX investigator and coordinator following the departure of Laura Cutaway, the previous Title IX coordinator. Following a Nov. 8 op-ed and a Nov. 13 letter to the editor that outlined specific instances in which the university did not meet survivors’ needs, Georgetown Survivors formed to offer new support networks to survivors of sexual assault.

The town hall also featured an open forum designed particularly for students from minority groups on campus to ask questions, according to STAIV. Many students, however, voiced frustration at the administration’s deferral of many questions to Health Education Services.

“I was disappointed that it was either Jen Schweer talking about what Health Education Services does or other members of the panel reflecting back on Health Education Services,” Singer said. “I feel that the institution should make an effort more holistically — it makes me feel there is a few very talented people in one office in campus, but I would like to feel as a student that the entire administration is committed to making students feel safe on campus.”

Despite these complaints, the town hall provided a welcome continuation of the conversations started in the feedback sessions, Singer said.

“I was really grateful that there was a conversation that felt very productive,” Singer said. “I felt that the administration was more transparent than they had been prior, and I did think the event ended with a pretty strong list of commitments that we can follow up and maintain conversation on.”