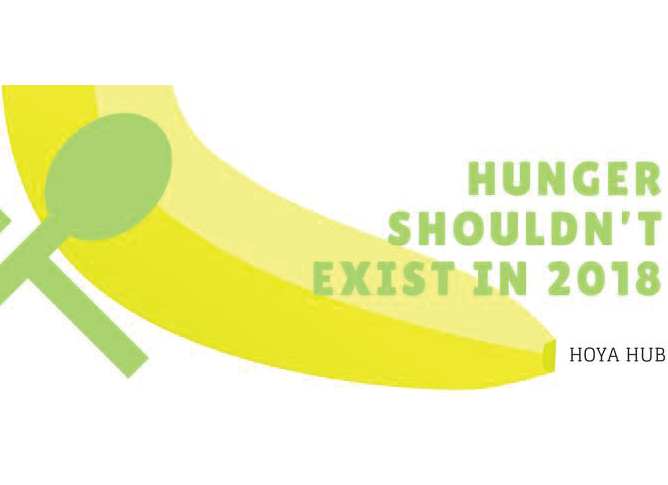 The Hoya Hub, an on-campus food pantry which will offer free food to members of the Georgetown community experiencing food insecurity, is slated to open in early October.

The project, which seeks to respond to concerns raised by the results of a 2016 Georgetown University Student Association survey in which 54 percent of respondents reported they were experiencing food insecurity while on campus, is chaired by Caroline Barnes (COL ’19). Sam Dubke (SFS ’21) and Madison Álvarez (SFS ’21) serve as the vice chairs.

Assistant Dean for Student Engagement Erika Cohen Derr is working as an adviser on the project. Saxa Fund, a fundraising platform for Georgetown students, will fund the project and now has a page up where donations can be made.

Although the project is still a work in progress, the team recently acquired a space on the fourth floor of the Leavey Center, so Barnes is hopeful that the space will be up and running soon.

“Finally, we have this space right now, it’s on the fourth floor of Leavey,” Barnes said in an interview with The Hoya. “We don’t have the space right now for refrigerators or a freezer, so we can’t do anything more than nonperishables. But it’s a place to start, and it’s a place that we didn’t have a month ago.”

The leadership of the Hoya Hub used food pantries that exist at other universities as a model for the Georgetown pantry.

In a system similar to The George Washington University’s “The Store”, where students can fill out a form and use their IDs to enter the pantry, any student will have the ability access to the Hoya Hub. A key difference between the two pantries is the decision to implement an open-door policy for Georgetown’s pantry, where the doors will remain unlocked to allow unfettered access whenever a student needs it.

“We just thought that this would be the best way, especially when we’re getting things off the ground, to have people self-identify [with] an open-door policy,” Barnes said. “For the most part it’s going to be: if you know about it, if you could use it, you access it.”

The open-door policy allows for the students who use the pantry to remain anonymous, a plan the three student leaders sought, as students at other universities sometimes resort to drastic measures to protect their privacy because of the stigma attached toexperiencing food insecurity, Dubke said.

“There were people that would go at three in the morning to avoid being seen, unfortunately, because the stigma is real and people are afraid to be seen accessing that resource,” Dubke said in an interview with The Hoya.

The Hoya Hub will not collect data on or information from any of its patrons, but in the future, the team hopes to track the usage of the pantry, Álvarez said.

“One day hopefully we’ll be able to track how many people are visiting, when and what days,” Álvarez said.

The team working on the pantry, all former or current GUSA senators, found that the release of the 2016 survey findings made their conversations with university administrators easier. The results provided clear evidence to provide to administrators that food insecurity was a campuswide issue, Dubke said.

“There were administrators who didn’t believe that it was a problem,” Dubke said.

Álvarez said the situation needed to be addressed by the university.

“For an institution that tries so hard to meet the needs of all of its students, it can be hard to admit that what it’s providing is imperfect and that students are suffering now,” Álvarez said.

A university spokesperson said the university is seriously addressing the issue of food insecurity on its campus.

“Georgetown University meets the needs of students who require financial assistance paying for college, which includes tuition, housing and meal expenses,” Matt Hill, Georgetown’s media relations manager wrote in an email to The Hoya. “After the food pantry opens, we will continue broader dialogue about food insecurity across our campus so we can ensure the university is addressing the needs of community members seeking additional food resources.”

The team is hopeful that the project will develop beyond the food pantry, transforming the Hoya Hub into a place where students can raise concerns, bring ideas about food insecurity solutions and host events for students.

“Once we’re really up and running, we want there to be programming, we don’t just want this to be a place where you can come to go and get food,” Álvarez said. “The immediate solution that we’ve been spending a lot of time on is creating a food pantry, but we don’t plan on stopping there.”