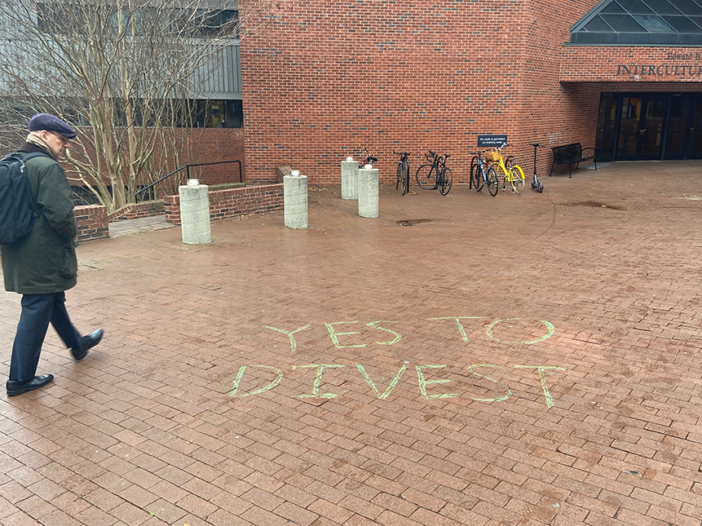 The board’s decision comes on the same day as the Georgetown University Student Association referendum on whether to support the university’s divestment from fossil fuel companies by 2024. The referendum passed by an overwhelming 90.7%.

Georgetown’s decision to divest from fossil fuel investments is an encouraging outcome for the entire Georgetown community, according to Lucy Chatfield (COL ’22), a member of GUFF.

“The whole process of campaigning for the referendum has gotten the student body engaged in thinking about divestment and we’ve gotten to reach a lot more people,” Chatfield said. “I think that this announcement from Georgetown will mean a lot more to people now that we’ve been going through this process and having this dialogue on campus.”

GUFF had submitted a proposal Jan. 17, 2019, to Georgetown’s Committee on Investments and Social Responsibility, a group of university representatives in charge of amending Georgetown’s investment practices, that called on Georgetown to not directly invest in fossil fuels in the future and to divest the endowment from fossil fuels by Jan. 1, 2024.

The board’s decision to divest is a testament to GUFF’s persistent and effective activism, according to Georgetown Renewable Energy and Environment Network President Noelle Gignoux (SFS ’22).

Currently, less than 5% of the $1.9 billion university endowment is invested in fossil fuel companies, according to a Georgetown University Official.

GUFF included a similar provision in its proposal to the university in January 2019, according to GUFF member Victoria Boatwright (COL ’22).

“There are many companies that are invested in fossil fuels and are engaged in fossil fuel exploration and extraction, but are trying to move to a more renewable future,” Boatwright said in an interview with The Hoya. “In some cases it is more important to evaluate the fund as a whole and just see that it is moving in the right direction.”

Georgetown has assessed its endowment’s holdings in the past, as it previously divested from coal in 2015 and from tar sand extraction in 2018. Additionally, the university’s 2017 Socially Responsible Investment policy ensures that Georgetown’s investments are in line with its commitment to the planet and social justice. The policy instructs Georgetown to avoid investments in companies whose practices have significantly harmful effects on the environment.

The decision to divest from fossil fuels aligns with the university’s Jesuit values and informs the pressing conversation surrounding climate change, according to DeGioia.

“The work of understanding and responding to the demands of climate change is urgent and complex,” DeGioia wrote in the email. “We all share in the responsibility to be caring stewards of the environment and to engage the resources of our tradition and the strengths of our communities in our pursuit of the common good.”

Advocating for socially responsible investments by Georgetown and making Georgetown’s board of directors aware of pressing climate issues demonstrated how much students care about both their community and the climate, according to Boatwright.

“It’s been so exciting to watch this whole process and see how many students care about this and are engaged with it and have given us positive feedback and responses,” Boatwright said. “It’s really encouraging to see a student body that can be really well aligned and become advocates.”

GUFF will advocate for Georgetown to maintain its commitment to divestment in a transparent way, according to Olivia Torbert (SFS ’20).

“This isn’t the end for GU Fossil Free — we’re now super excited to begin working with the administration to make sure how this is implemented is in a really great and efficient way,” Torbert said in an interview with The Hoya. “We’re excited to not end right now, but to start.”