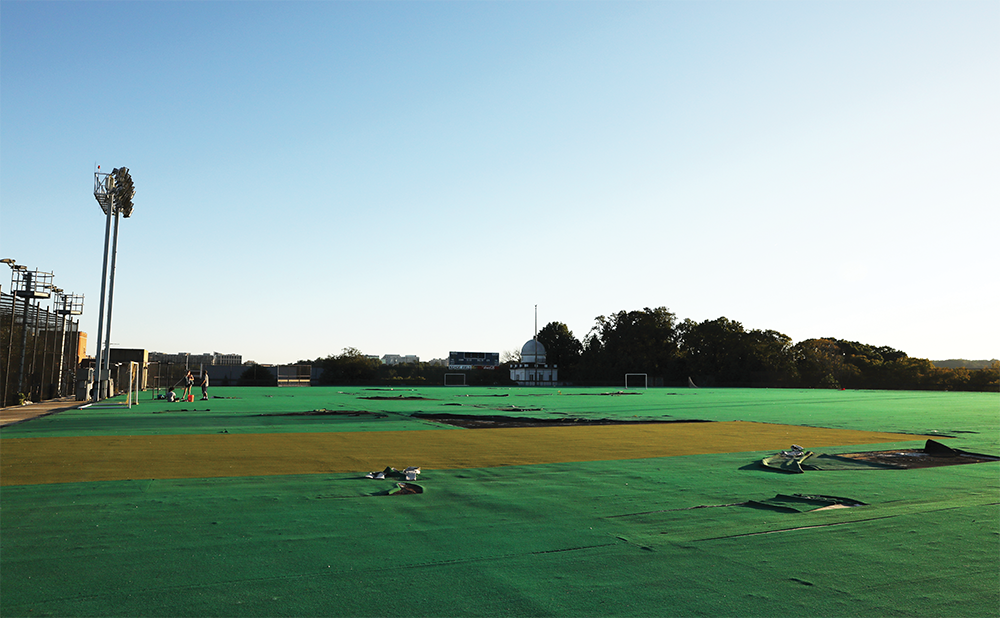 The university advanced a plan to construct a temporary replacement for Kehoe Field after the board of directors approved a design study yesterday.

The announcement marks the first major step by the university toward replacing the field, which sits atop Yates Field House, after nearly two years of lobbying from student leaders. Kehoe was closed in February 2016 after club sports teams and university officials raised concerns over safety.

The vote also represents a stark reversal from board members, who in June rejected proposals for a short-term fix until the university could construct a permanent replacement, according to Ricardo Mondolfi (SFS ’19), the Georgetown University Student Association representative to the board.

University officials gave student representatives a “definitive no” on a temporary replacement at a June board meeting, Mondolfi said.

Board members concluded that the short-term replacement, expected to last 10 years, would not be worth its multi-million dollar cost. Instead, the board expected to leave Kehoe shuttered for at least the next decade until Yates is ultimately demolished and entirely replaced by 2036.

Officials hope the renovation project, if it receives final approval, will be completed by the spring or summer of 2019 and cost about $5 to $10 million, according to Mondolfi. The new renovations are expected to address the field’s drainage problems by installing lightweight foam between the roof and the artificial turf surface, helping rainwater to drain off the roof into a nearby stream.

The engineering design for the renovation is expected to cost $500,000.

The field’s structural problems began when it was rebuilt on the roof of Yates in 1979. It was first constructed in 1942.

The lightweight concrete roof of the gymnasium does not properly drain rainwater, leading the field and the roof itself to deteriorate from pooling water. The field has been repaired twice since 1979, first in 1987 at a cost of $1.8 million and again in 2002 for $7 million.

Vice President for Student Affairs Todd Olson said the Kehoe renovation is an “important project for our community,” according to a Thursday news release.

“After studying options to replace the field surface, we are pleased to be moving forward with plans for a replacement that will restore three acres of recreational space for our community and allow numerous club and intramural sports to practice and compete on campus,” Olson wrote.

The closure has left club sports teams without a dedicated practice field for nearly two years. Kehoe had previously been the main field for club sports teams, which now have to share Cooper Field with varsity and intramural sports teams or use off-campus fields at Georgetown Visitation Preparatory School and the Duke Ellington School of the Arts.

According to Perry Cao (SFS ’17), former captain of the Men’s Ultimate Frisbee team, conditions on those fields were less than ideal, and many were unlit. The team has struggled with recruitment, and attendance has dwindled at practices.

“The only time slot we could get was 5 p.m. to dark, and some of the weeks where we were off Cooper, 5:30 to dark was like 5:30 to 5:45,” Cao said in a February interview. “All of club sports is really, really furious about it, just because Georgetown has so little field space.”

Editor’s note: This article has been updated to clarify the status of the temporary replacement plan for Kehoe Field.