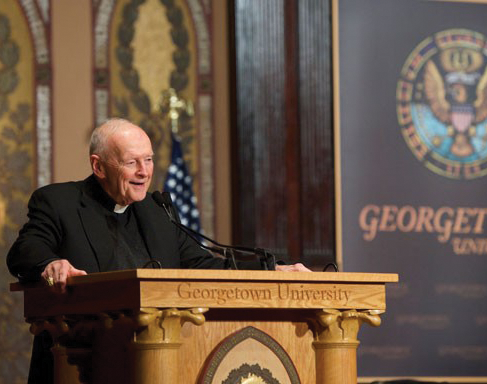 DeGioia’s email addressed a report published by a Pennsylvania grand jury in August that identified over 300 Catholic priests in Pennsylvania who sexually abused more than 1,000 children over seven decades, according to a Washington Post article.

One of the named perpetrators was Cardinal Theodore McCarrick, archbishop emeritus of Washington, D.C., who holds an honorary Georgetown degree. The Washington Post reported that McCarrick sexually abused both boys and men throughout his time as a Catholic priest. McCarrick was asked to be removed from public ministry in July, when his history of sexual abuse came to light, according to a statement released by the archbishop of New York.

In his email sent to the Georgetown community, DeGioia criticized the Catholic Church for the rampant scandals, but did not offer concrete actions that the university will take in response to McCarrick’s involvement in the sexual assault scandals.

“The discovery, in part through the efforts of the Attorney General and Grand Jury in Pennsylvania, of the depth and breadth of complicity over the last seventy years, has revealed an abject failure to protect the most vulnerable among us,” DeGioia wrote. “This systematic failure demands accountability on the part of the Church and discernment in our Georgetown community about our appropriate response.”

“We have begun, across the University, to lay the foundation for the dialogue, reflection, and action that will contribute to a deep and authentic transformation,” DeGioia wrote.

A university spokesperson specified that the administration will consider revoking McCarrick’s honorary degree.

“President DeGioia’s message to the community earlier this week shared that the University has initiated processes to address the deeply troubling revelations about Archbishop McCarrick and also in the Pennsylvania grand jury report,” he wrote in an email to The Hoya. “This includes an honorary degree review process.”

Several Catholic student groups on campus, including Catholic Women at Georgetown and the Knights of Columbus, have called for the administration to rescind McCarrick’s honorary degree, awarded in 2004, and they urged university administration to directly address the issue.

“I’m disappointed that the university has neglected to substantively address McCarrick’s misconduct,” Erica Lizza (SFS ’19), the president of Catholic Women at Georgetown said Aug. 8. “Our organization supports the revocation of McCarrick’s honorary Georgetown degree and hopes that the university will address the scandal and its impact with our larger D.C. Catholic community.” (Full disclosure: Lizza is a member of the editorial board at The Hoya.)

In his email, DeGioia quoted former Superior General of the Jesuits, Pedro Arrupe, S.J., in emphasizing the importance of maintaining the Jesuit value of fighting for social justice through education to ensure justice.

“We must help each other to … above all make sure that in the future the education imparted in Jesuit schools will be equal to the demands of justice in the world,” DeGioia wrote.

Georgetown’s programs in global development, health and social justice are efforts by the university to live up to this challenge articulated by Fr. Arrupe, according to DeGioia.

“Our programs in Global Health, Global Human Development, and our Center for Social Justice, Research, Teaching & Service are three examples of our efforts to respond to this challenge,” he wrote.

DeGioia called on the Georgetown community to maintain its commitment to social justice and change and to remember the university’s founding elements.

“We respond best to the forces of disruption by deepening our commitment to our work,” he wrote. “We must accept the responsibility for which we are prepared and capable: to embrace the work of integrating the four elements of our identity in the service of social transformation.”

DeGioia expressed concern and a need to protect those affected by the scandal and asserted the need for better protection for those at risk of abuse.

“The most vulnerable among us must be protected,” DeGioia wrote. “They deserve the very best work we are capable of providing.  We have an immediate and urgent need to engage in the work of ‘cultural change’—to create a context in which the most vulnerable among us will be safe and protected, to create a context in which the abuse of power can be identified and eliminated.”