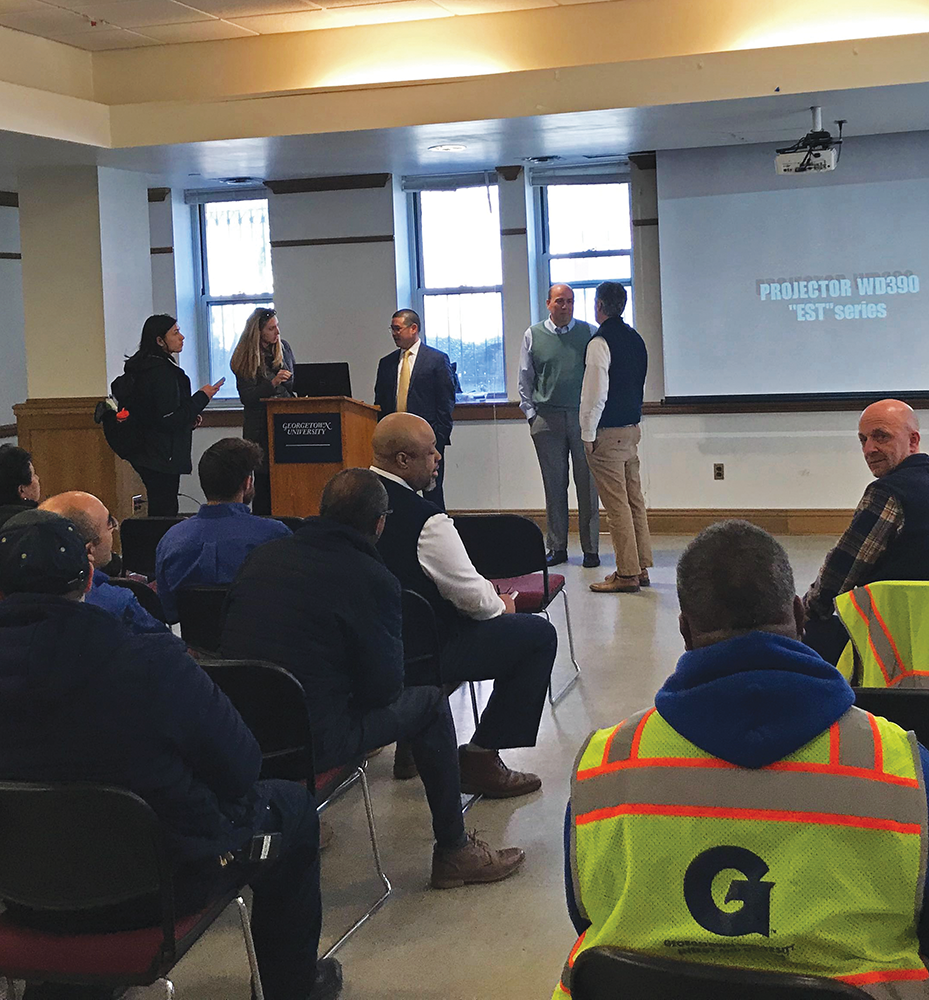 Georgetown University administrators are exploring private partnerships to handle the university’s energy management, a process leading to concerns from workers in the utilities and energy program about their job stability and employment benefits.

“While there are no new partnerships to speak of at this time, the University is beginning to explore the feasibility of pursuing an energy partnership,” a university spokesperson wrote in an email to The Hoya.

Ben Kuo, Vice President for Planning and Facilities, and Chief Operating Officer Geoffrey Chatas held a March 19 meeting with employees of Georgetown’s central heating and cooling plant as part of a series of introductory meetings, according to a university spokesperson.

Some utilities workers expressed disappointment by the lack of information regarding the partnership, according to a central plant employee referred to by the pseudonym John, who asked to remain anonymous for concerns about his employment. John and one other worker notified The Hoya of the March 19 meeting. A reporter from The Hoya was asked to leave the meeting.

“They didn’t really give us any detail in the meeting as far as them wanting to contract out the operations of facilities, and of course, the Georgetown employees, that’s what they were worried about,” John said in an interview with The Hoya. “That was supposed to be what they were going to talk about; they avoided that direct conversation as much as possible.”

Under any partnership agreement, the university would ensure all utilities employees maintain an opportunity to work at Georgetown and does not plan to alter the collective bargaining agreement with the 1199SEIU labor union, according to a university spokesperson.

“We would also respect any collective bargaining obligations that the University may have with respect to such a potential decision and its effects on employees represented by 1199SEIU,” the spokesperson wrote.

Previous changes in campus service providers have negatively affected employment for some university workers. At least three Georgetown University Bookstore employees lost their jobs when the university switched vendors from Follett to Barnes and Noble in May 2016.

The bookstore employees were covered by the university’s Just Employment Policy, which is designed to ensure fair treatment of employees. Georgetown attempts to avoid job losses for current university employees when services change contractors, according to the JEP.

Utilities workers remain concerned with potential changes to employment benefits, according to John.

“They told us they’re not going to get rid of any Georgetown employees,” John said. “That may well be true, but most of the questions were about how the benefits would work — what about the retirement and tuition assistance?”

Many workers rely on university benefits to keep their children in school, according to a facilities worker who also requested anonymity for employment concerns, referred to by the pseudonym James.

“Many of us have our children in colleges and many of us work at [Georgetown] for the benefits [the university] offers,” James said in an interview with The Hoya.

Several utilities workers have already started to look for other employment options, according to John.

“At least four have told me they’re looking,” John said.

The university’s consideration of partnerships with private companies, designed to reduce operating costs, is similar to its existing relationships with food-service companies.

“As a tuition-dependent institution, Georgetown is committed to reducing operating expenses and focusing our resources on our academic mission,” a university spokesperson wrote in an email to The Hoya. “This includes exploring partnerships similar to ones the University has for our hotel and food service management.”

The university currently partners with Aramark and Epicurean and Company for food-service management. Workers have faced problems with mistreatment or contract renegotiations within these partnerships.

The Georgetown Solidarity Committee, a workers’ rights student activist group, and La Casa Latina, a space for the Georgetown Latinx community, co-hosted an event designed to advocate for workers among Aramark’s contract renegotiations.

Last September, Epicurean assumed control of Bulldog Tavern from its previous vendor, Aramark. Since then, former Bulldog Tavern employees have filed lawsuits against Epicurean and Company in response to violations of the 1994 Displaced Workers Protection Act.

Although the university has not decided on a contract, workers are looking to previous examples of privatization at other universities for clarity, according to John.

Chatas guided a similar decision to privatize energy production at Ohio State University, where he was previously employed as vice president for business and finance and chief financial officer.

OSU partnered with energy company and investment firm ENGIE-Axium, now known as Ohio State Energy Partners, in a $1.165 billion deal, according to an article by The Lantern, Ohio State’s newspaper of record. The deal was the largest investment in university history.

University administrators plan to seek input from community members throughout the process of establishing a partnership, according to a university spokesperson.

“We would explore this partnership through a transparent, consultative process with significant input from faculty, staff, students, and other stakeholders,” a university spokesperson wrote in an email to The Hoya.