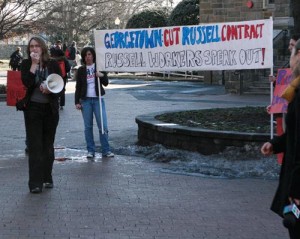 Image Contributor
After students and media gathered in protest on Monday, the university followed suit by stating that it would not renew its contract with Russell Athletic.

Only two days after a student rally in Red Square calling for a contract termination with the clothing company Russell Athletic, Georgetown became one of four universities in the United States to announce that it will not renew its licensing agreement with the sportswear manufacturer.

The rally on Monday was organized by the Georgetown Solidarity Committee, with help from the national organization United Students Against Sweatshops. Both groups demanded that the university end business relations with Russell Athletic, a subsidiary of the Russell Corporation, following Russell’s decision to close Jerzees de Honduras, one of its factories in Honduras, when the workers attempted to form a union. The university’s Licensing Oversight Committee, comprised of students, faculty and administrators who work together to advise the university on matters of licensing policy, recommended Wednesday that Georgetown end its business relationship with the company through a letter directed to Russell Athletic.

“As chair of Georgetown University’s Licensing Oversight Committee, which has primary responsibility for advising our university on matters of licensing policy, I am writing to inform you that the university has accepted the LOC’s recommendation that we end our business relationship with Russell Athletic,” wrote LaMarr Billups, chair of the LOC, in a letter this week on behalf of the university to Russell Athletic. “This letter serves as notice that Georgetown will not renew our licensing agreement when the current agreement expires in June 2009.”

Some GSC members felt that the rally and the press conference in Red Square sped up the university’s decision. Following the rally, two of the former Jerzees de Honduras workers, Moises Elias Montoya Alvarado and Norma Estela Mejia Castellanos, led a march to University President John J. DeGioia’s office, where they delivered a letter of protest and spoke to DeGioia’s Chief of Staff Erik Smulson about the violation of their rights.

“The rally on Monday served to hasten Georgetown’s process since bureaucracy can be a little slow to react without pressure,” said Jared Watkins (COL ’11), a member of GSC and a student serving on the LOC. “The university was surprised by the press conference in the amount of media that attended and in the march to the president’s office.”

The Honduras factory officially closed last Saturday, Watkins said. Russell announced its closure of the factory in October 2008, further escalating a conflict that began a year earlier; in 2007, the LOC investigated possible violations of the university’s Code of Conduct for Licenses at Choloma, another Russell factory in Honduras. Subsequent investigations by the Worker Rights Consortium, of which Georgetown is an affiliate, as well as the Fair Labor Association, concluded that anti-union sentiment closed Jerzees de Honduras, where talks with the recently formed union, Sitrajerzeesh, had broken down.

“Both the [Worker Rights Consortium] report and the [Fair Labor Association] report – which was commissioned to assess validity of the previous two FLA-commissioned reports – find that the exercise of the worker’s right to associate free from harassment and intimidation was the significant basis of the closure decision in both the Jerzees and Choloma cases,” Billups wrote in his letter.

Billups’ letter also stated that such reasoning for a closure flouts the university’s Code of Conduct for Licenses. The efforts to resolve the issues through dialogue had been unsuccessful, Billups added.

Watkins said that he believes discontinuing business relations with Russell will demonstrate Georgetown’s commitment to ethics in its licensing agreements.

“For many universities wishing to put a happy face on their licensing procedures, the code of conduct is a flimsy document with little worth. But Georgetown has proved that its code is something not to be violated and is something which will be enforced,” Watkins said.

“Since Georgetown is a leader in the anti-sweatshop community, this will give universities more confidence and reason to cut or not renew their contracts,” Watkins said. “We believe we will see many more universities follow suit in the next few weeks.”

Both the GSC and the LOC will monitor Russell’s actions regarding severance and benefits to the displaced workers, according to Billups’ letter. Russell has also pledged to assist its workers in finding new jobs in area factories, Billups added.