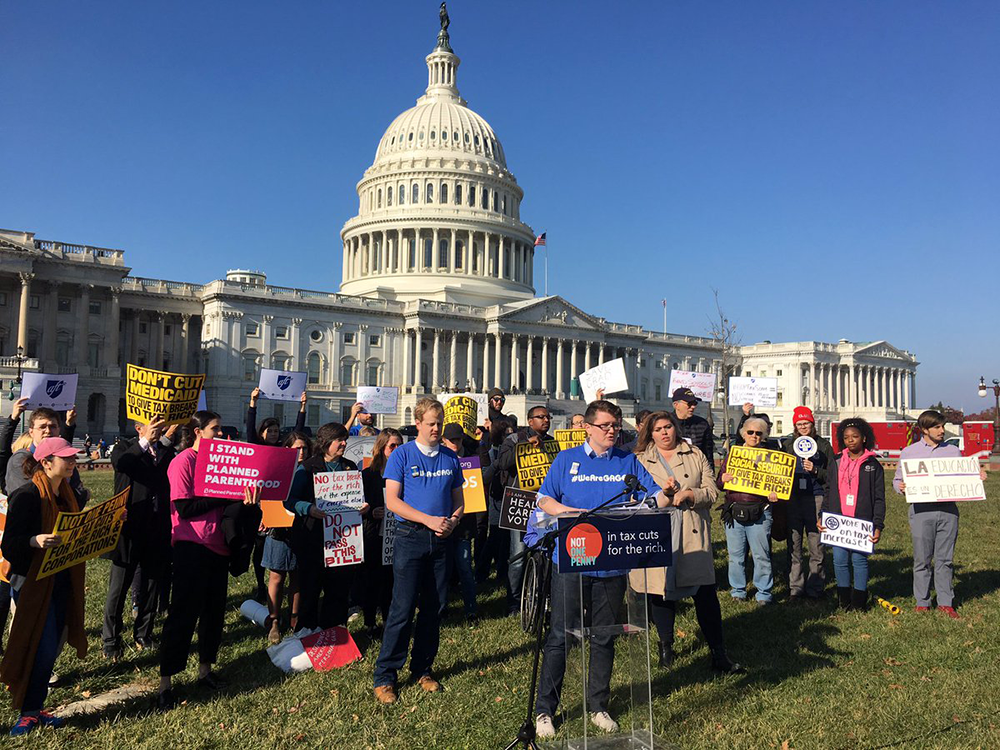 The Office of the Provost declined to recognize the efforts of a group of Georgetown University graduate student workers Monday afternoon, setting back nearly yearlong efforts to establish a union, after saying the university does not regard graduate students as employees protected by its Just Employment Policy.

About 100 members of the Graduate Alliance of Graduate Employees, a group of graduate students that began organizing last January, marched through Red Square and the Intercultural Center on Thursday afternoon, calling for recognition and fair treatment.

Provost Robert Groves told GAGE organizers that the Just Employment Policy did not apply to graduate students in a Monday morning meeting. Adopted in 2005, the policy is intended to ensure fair compensation packages for university employees and full-time contract workers.

GAGE said it will continue to fight the decision and will draw on support from the American Federation of Teachers, an education-focused union affiliated with the University of Vermont and the University of Chicago that has been designated as the labor advocacy group’s bargaining agent.

With the assistance of AFT, GAGE plans to file a petition with the National Labor Relations Board and call for an election. The NLRB takes action to safeguard employees’ right to organize and to decide whether to have unions serve as their bargaining representative with their employer.

GAGE claims that a provision of the university’s Just Employment Policy establishes a basis for forming the union. The policy states that the university will “respect the rights of employees to vote for or against union representation without intimidation, unjust pressure, undue delay or hindrance in accordance with applicable law.”

It ensures a total compensation package “substantially greater” than minimum wage requirements in Washington, D.C., and the surrounding metropolitan area.

The university considers its relationship with graduate students educational and not akin to the relationship between an employer and an employee, according to Rachel Pugh, the university’s senior director for strategic communications.

“A graduate student’s relationship with the University is fundamentally an educational one and [Georgetown] has declined to recognize GAGE as a collective bargaining representative for a limited subset of graduate students,” Pugh wrote in an email to The Hoya.

The announcement comes after a yearlong effort by GAGE organizers to persuade the university to formally recognize their union. GAGE said it was pushing the university “to respect the rights of employees to vote for or against union representation without intimidation, unjust pressure, undue delay or hindrance.”

Students have said that embracing a union would align with the school’s Jesuit values affirming the dignity of labor, thereby allowing them to negotiate more favorable wages and work conditions.

GAGE received support from more than half of graduate student workers at Georgetown, which constitutes about 800 graduate students in the bargaining unit, according to GAGE member and sixth-year doctoral student Hailey Huget.

“Georgetown University Provost Robert Groves stated that we are not workers, that the hours we put into the classroom, in the laboratory, in hosting office hours and preparing syllabi, is strictly something we would do to further our education as students and provides no value to the institution,” GAGE wrote in a Facebook post published Monday afternoon.

The push at Georgetown for better work contracts for graduate students serving as teaching assistants and research assistants started Aug. 23, 2016, when the National Labor Relations Board ruled that student assistants can unionize and collectively bargain.

Nelms remains optimistic about the future of GAGE’s efforts.

“We will do everything we can to push for a fair and swift election, and call on our faculty and student allies to support us,” Deidre Nelms, a third-year doctoral student, wrote in an email to The Hoya. “We already have the numbers we need to win an election, and will continue talking to graduate workers, organizing, and moving forward.”

Nelms said she hopes the petition process with NLRB will move swiftly to avoid contention between the graduate students and university faculty.

“It would be horrible for our university to call on faculty and graduate workers to testify against each other, following UChicago’s example,” Nelms wrote.