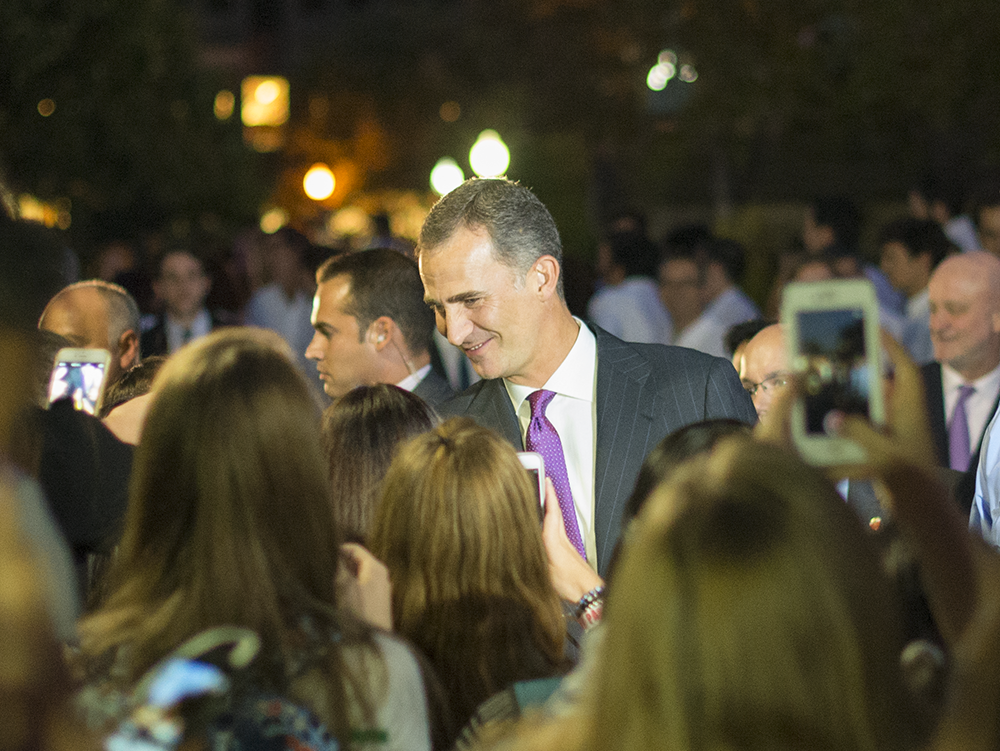 King Felipe VI (GRD ’95) and Queen Letizia of Spain visited the university Wednesday to launch a three-day campus conference with Spanish scientists, attending both the first meeting of the conference in Riggs Library and celebratory dinner in their honor on Copley Lawn.

The panel discussion in Riggs Library, primarily conducted in Spanish, touched upon the main themes of the conference, including biomedical research, energy, engineering, technology, economics and the social sciences.

University President John J. DeGioia introduced the king, queen and Spanish scientists at the meeting, thanking them all for their respective contributions to the conference.

“We’re deeply honored for this opportunity to host you and to help create a forum for discussion, reflection and for the sharing of discoveries in your various fields of research through the conference that will take place here in the days ahead,” DeGioia said. “We are extraordinarily grateful for their presence here today, and look forward to hearing from His Majesty, an extraordinary global leader and Georgetown alumnus, later in this program.”

King Felipe graduated with a master’s in foreign service from the School of Foreign Service and continued his involvement in the university community after graduation with contributions to the Georgetown Leadership Seminar.

The prince was an active part of the student community and even enjoyed playing squash at Yates Field House, according to a 2014 article published by the university.

Shortly before ascending to the throne in the summer of 2014, he created and served as chair of a Georgetown Global Forum in Madrid called “Momento España.”

Although much of King Felipe’s speech at the meeting was in Spanish, he concluded in English, thanking the university and alluding to his time as a graduate student.

“This institution is really close to my heart. As you know, it contributed to my personal and intellectual education in such a way that I will always be grateful and honored,” the king said. “Today the queen and I would also like to show our deep appreciation of the warm welcome you offered us … and for opening your doors to our delegation, to this group of Spanish scientists who are wonderful ambassadors for the talent and innovation from Spain.”

Following the discussion in Riggs Library, the king and queen left Healy Hall and greeted members of the Georgetown community on their walk to dinner, held in an enclosed tent on Copley Lawn.

BMW Center for German and European Studies Director Jeffery Anderson met the king and queen at the dinner.

“I use the terms ‘pride’ and ‘joy.’ It was a joyful event on both sides,” Anderson said. “We’re obviously very proud of all that he’s accomplished, and at the same time, one could tell that he was very happy to be back. I’ve heard from many people who are close to the king how much he remembers fondly his Georgetown experience and how much he enjoys returning, and so you could see that on his face and on the queen’s face.”

Anderson added that he is optimistic about the future of scientific collaboration between Spain and the United States, given the success of the King Felipe’s visit.

“It’s hard to say what will come out of it, but there’s obviously a huge amount of goodwill and it’s building on very established relationships, both within the United States and across the Atlantic with Spain, so this can only further help the development of this important area for both the United States and Spain, but also for Georgetown too,” Anderson said. “It was great to see Georgetown on the map for this important initiative.”

Georgetown University Police Department officers were stationed around the front lawns throughout the evening and closed off all walkways in front of Copley and Healy Halls as the king and queen made their way to dinner. The police team allowed the first community members who lined up to stop and take pictures with the royals.

GUPD Chief Jay Gruber said the department worked alongside the Secret Service to ensure the event was safe.

“We do a lot of walkthroughs with the office of protocols here at the university and with the organization that’s protecting that particular person, and in this case it was the Secret Service,” Gruber said.

He added that there were no security issues, and described the evening as a success.

King Felipe VI and Queen Letizia also toured Mount Vernon and the White House earlier in the week, as part of their first official visit to the United States.