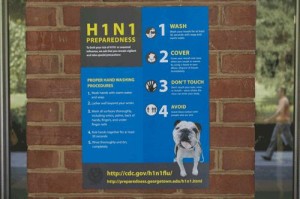 Image Contributor
University officials have placed signs across campus notifying the community about the virus.

Due to [recent cases of the H1N1 virus in Washington, D.C.](https://www.thehoya.com/news/seven-cases-of-swine-flu-confirmed-in-the-district/), and on the Georgetown campus, the university recently has taken health measures to help prevent the anticipated spread of the virus on campus this fall.

The e-mail noted that a few cases of the virus appeared on campus over the summer. The first H1N1 case at Georgetown was reported on June 12, according to the Student Health Center’s Web site. Those individuals have since fully recovered.

The e-mail also provided a Web site with information on the H1N1 virus and certain health precautions: www.preparedness.georgetown.edu/swineflu.html.

“We’re taking the H1N1 virus very seriously, and we’ll be posting more information on the preparedness Web site in the coming days,” said Andy Pino, director of media relations for the Office of Public Affairs.

The university has also set up a Student Health Center H1N1 hotline, which can be reached at (202)-784-H1N1. The advice hotline will have a nurse on call who can answer questions about the flu for students with symptoms, according to Pino.

According to the Student Health Center’s Web site, the university will offer the H1N1 flu vaccine once it becomes available, and recommends that students take advantage of this option. The university has not yet finalized its plans as to who will be able to receive the vaccine and how it will be administered. These details should be finalized by mid-October, according to the Web site.

akeda Easter (SFS ’12) said that she was glad the university addressed the situation early.

“I think that swine flu has the potential to be as chaotic as [the norovirus scare last year](https://www.thehoya.com/news/190-students-infected-in-campus-viral-outbreak/), so I’m thankful that Georgetown is addressing this early,” she said.”