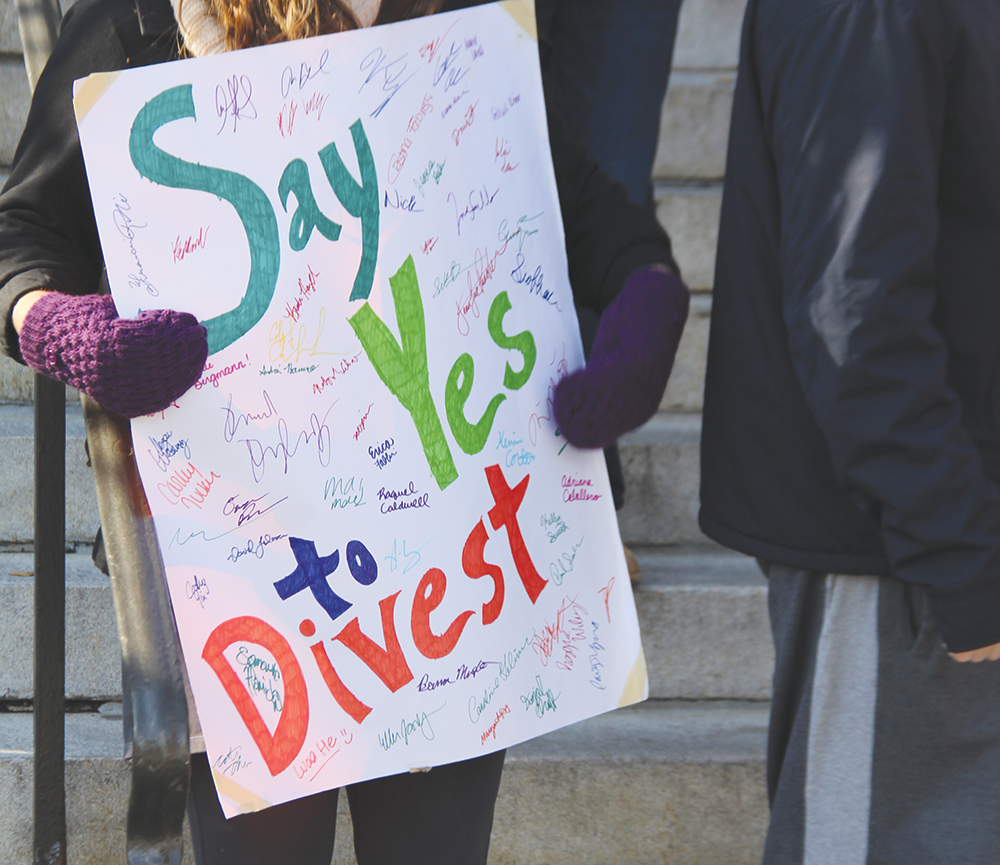 The decision came Thursday, as the third day of board meetings came to a close. GU Fossil Free, an organization dedicated to full divestment from fossil fuel companies, expressed disappointment with the vote in a statement released shortly following the announcement.

“GU Fossil Free maintains that this is not a victory,” the statement read.

Members of the organization, some coming from as far as Texas for the vote, held a sit-in in the hallway of the Leavey Center, just outside the board meeting.

The vote came at the end of a long year of campaigning by GU Fossil Free to encourage the university to divest from all its holdings in the top-200 fossil fuel companies. GU Fossil Free’s effort was acknowledged both in the resolution itself and in the statement released by the university.

The resolution affirmed the recommendations of a working group, created this past semester to examine divestment. The Committee on Investments and Social Responsibility voted in January against GU Fossil Free’s original proposal, instead recommending targeted divestment from the top-100 companies with the biggest environmental impact from coal mining operations.

The working group, established in April and composed of board members, was charged with evaluating CISR’s proposals and making recommendations. The group participated in videoconferencing with members of GU Fossil Free.

“The working group based their recommendations on deliberations, extensive analysis and the proposals put forward by GUFF and CISR,” the university’s official statement on the resolution said.

The final resolution states that the board of directors approved and adopted the working group’s recommendations in their entirety.

The board will select a committee, under the supervision of its executive committee, to examine the broader question of investments and social responsibility. The resolution also pledged to continue and strengthen the academic study of energy and the environment, as well as reduce its environmental footprint.

GU Fossil Free Member Caroline James (COL ’16) said she wanted to seek clarification with administrators about the details of the “special board committee” and the “regularized process,” as cited in the resolution.

Office of the President Chief of Staff Joseph Ferrara (GRD ’96) announced the decision to GU Fossil Free immediately following the vote. Ferrara addressed the group at their sit-in in the hallway.

“The board members got this document, the … final one, last night. Earlier versions of this had gotten to them — there were some additional discussions — so everybody had this in front of them,” Ferrara said. “[Board Chairman Paul Tagliabue (CAS ’62)] made some comments, President [John J.] DeGioia made some comments, they then turned it over to Bill Berkley, he then went around to the other working group members, Maurice Brenninkmeijer, Sister Carol [Keehan], etc. … and then it was sort of an open discussion for all board members. And then they voted and it was unanimous. … Alberto Beeck spoke up, Frank McCourt spoke up, Victor Wright, Jean Carey spoke up.”

Members of the board of directors did not respond to requests for comment.

Ferrara told the group he and Secretary of the University Ed Quinn would be willing to meet with them at 7 p.m to hold a question-and-answer session about the decision.

Members of the organization were less than content with the final result.

“I am very unhappy, I think this was a very, very tiny step that was taken pretty much because direct coal investments aren’t fabulous investments anyway, I think it was done to appease us,” GU Fossil Free member Caroline James (COL ’16) said. “It seems like a much bigger step than it actually represents. I appreciate that they have taken up this conversation but this is barely any kind of action at all.”

She added that she had a litany of questions for Ferrara on a range of problems with the resolution like vague language and more details on certain promises.

“Georgetown made a tiny baby step in the right direction by divesting only its direct holdings in coal,” GU Fossil Free member Elaine Colligan (SFS ’15) said. “But to my knowledge that could represent as little as less than one percent of the endowment. Michael Barry, the [Chief Investment Officer], told me verbatim that these investments were bad investments anyway.”

Colligan said that GU Fossil Free would continue to push for full divestment.

A spokesmen for the Independent Petroleum Association of America and the anti-divestment site Divestmentfacts.com, Matt Dempsey, stood off to the side of the sit-in.

“I think what you have is a school that took a really hard look at the divestment question, and ended up concluding, like the vast majority of other institutions being solicited by activists, that divesting from oil and gas is a really bad idea,” Dempsey wrote in an email. “Obviously, we would have preferred an outright rejection of the proposal out-of-hand, like Santa Clara University did this week, but no honest activist will consider this a victory.”

The Independent Petroleum Association of America funded a study that suggests that divestment hurts endowments. The New York Times noted that other studies have suggested both negligible and slightly positive effects.

“This most recent action by our board enables us to ever more deeply fulfill our responsibility to be caring stewards of the environment,” DeGioia wrote. “As a Catholic and Jesuit university, we are called to powerfully engage the world, human culture, and the environment—bringing to bear the intellectual and spiritual resources upon which our community is built.”

In addition, the Georgetown University Student Association President Joe Luther (COL ’16) and Vice President Connor Rohan (COL ’16) said in a press release that they believe the decision was a step in the right direction.

“I think it’s a really positive step for the university,” Luther said. “It’s something students have been very engaged with over these past few years, but I hope the conversation about how Georgetown could be more environmentally conscious and sustainable doesn’t end here.”