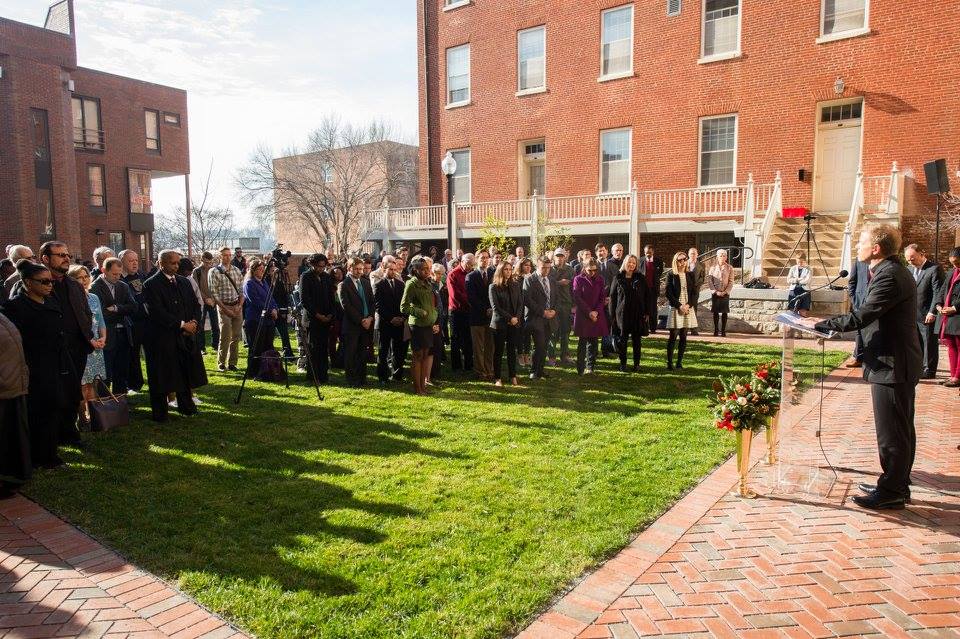 Georgetown University President John J. DeGioia and the Working Group on Slavery, Memory and Reconciliation held a ceremony and reception to recognize the interim naming of Freedom Hall and Remembrance Hall on Friday afternoon.

The Office of the President formed the working group in September with the hopes of reflecting on the university’s history with slavery, specifically in regards to the sale of 272 slaves to a Louisiana plantation in 1834 by former University Presidents Fr. William McSherry, S.J., and Fr. Thomas Mulledy, S.J.

On Nov. 14, DeGioia and the university board of directors received a recommendation from the working group to change the names of former Mulledy Hall and McSherry Hall to the interim names of Freedom Hall and Remembrance Hall, respectively. The working group’s recommendation came one day after a student demonstration in Red Square and a sit-in by activists outside DeGioia’s office.

The ceremony began with opening remarks from DeGioia, followed by speeches from Aruleba and Fakado, who both spoke on the occasion’s significance and symbolism. Aruleba and Fakado focused their addresses on how the Georgetown community must progress in the future if it is to truly learn from and address its history with slavery.

Aruleba said the removing of the names Mulledy and McSherry from the buildings shows recognition of the history the Georgetown community should refrain from denying in order to progress as a university.

“The changing of the names is symbolic of the deep intellectual, ethical and moral struggle that our [Georgetown] community will traverse through as we continue in this process of reconciliation with the victims of America’s original sin,” Aruleba said.

Schendel said the symbolic name change should forever remind the Georgetown community of slavery and the injustices done to those denied freedom.

“As we rededicate these buildings, may they remain symbols, beacons of freedom and remembrance here at Georgetown,” Schendel said. “May we always remember those who were denied freedom due to the sin of slavery here at Georgetown and in our nation.”

Aruleba said there is a role each individual community member should play in shaping the university’s future history, asking them to continue contemplating the actions of Georgetown’s past students, faculty and staff.

“This step is an institutional recognition that we have entered into a stage of deep reflection on the actions of those who came before us,” Aruleba said. “As we look back [on] Georgetown’s history, it’s on each of us to recognize that we are all the authors of Georgetown’s future.”

Fakado said he agreed with Aruleba and expressed particular support for student activism on campus and its role in pushing for change and dialogue.

“I cannot help but be proud of the creative student activism that spurred such swift response from the university in the past month,” Fakado said. “However, the renaming of these buildings serves as a reminder to the amount of work that needs to be done on our campus, other campuses and in our nation.”

Fakado said the working group’s purpose alongside a collective understanding could build a better future for the university.

“It’s imperative that we continue to reflect as a university community, not only to come to terms with our past, but also to understand the continuing ways legacy and institutionalized oppression play out in our present day so we can fundamentally effect change in our future,” Fakado said.

DeGioia asked the ceremony’s audience to reflect on the moral failings of past Georgetown community members and take lessons from history to act in the moment.

“Over 170 years ago, people, just like us, lacked the moral imagination in their moment to recognize the responsibilities that we have to one another, to see the humanity and the inherent dignity of all peoples,” DeGioia said. “Their days are not unlike our days; their moral failing are not unlike our own.”

Donald McKay (COL ’17), who attended the ceremony, acknowledged the event as an effective way for the university to continue to show its dedication to addressing its historical ties to slavery. He also said that while it is important to emphasize the future work that must be accomplished, the renaming of the halls is still a notable achievement.

“At the end of the day, we can’t change the role our school played in slavery,” McKay said. “But that doesn’t mean we can’t — at least in the moment — understand its consequences and maybe try and right those wrongs of the past. There still can be progress, and this is definitely a welcome step in the right direction.”

DeGioia emphasized each community member’s role in addressing and confronting the school’s history in his closing remarks. He said that acknowledging this particular facet of history must also spur the work of building a stronger community and finding common good to shape the future Georgetown community.

“Let us find our best,” DeGioia said. “Perhaps one day it will be said of us that there was a moment when this community found new ways to enable our most deeply held values to come alive and achieve the best of which we are capable. Let us challenge ourselves to this work.”