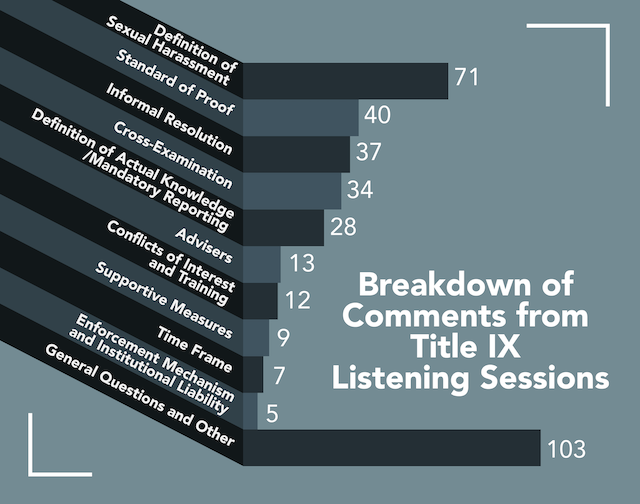 The Georgetown community can now review the draft of the university’s comment to the U.S. Department of Education regarding proposed Title IX reforms. Vice President for Student Affairs Todd Olson and Vice President for Institutional Diversity and Equity Rosemary Kilkenny shared the document in a Wednesday email and welcomed student feedback by Sunday, Jan. 27 through an anonymous form.

The university’s 10-page draft comment includes criticism of the Department of Education’s proposed definitions of the terms “sexual harassment” and “formal complaint.” The administration also argued against the proposal for requiring cross-examination of all parties and witnesses in Title IX cases, among other critiques.

“We are very pleased with the University’s comment, which is a product of the collaboration and insight of our entire community,” Hill wrote in an email to The Hoya. “Through the listening sessions, online feedback forms, and the STAIV town hall, our community provided valuable perspectives, insights, and information.”

Community members can also submit their own comments directly to the Department of Education until Jan. 30, a deadline that was extended from Jan. 28 last week following issues with the department’s website.

Georgetown’s sexual assault and misconduct climate survey, administered in January and February 2016, found that 31 percent of female undergraduates and 10.8 percent of male undergraduates had experienced nonconsensual sexual contact since entering Georgetown; nearly half of all students and more than three-quarters of all female students had experienced sexual harassment.

More than 370 participants made comments or asked questions at those feedback sessions. Attendees focused their concerns on several issues that the university highlighted in its draft comment, including the legal definition of sexual misconduct, the role of advisers at hearing sessions and the standard of proof in cases of sexual harassment and assault.

Participants in the feedback sessions were particularly concerned with the proposed redefinition of sexual misconduct. More than 70 participants expressed concerns about the consequences of the proposed stringent definitions that could limit what qualifies as sexual harassment.

The Department of Education Title IX proposal would change the definition of sexual misconduct from behavior that is “severe or pervasive” to “severe, pervasive, and objectively offensive.” Individuals at feedback session worried that some behaviors, such as stalking and relationship violence, would not meet the new standard for sexual misconduct and that new rules would deprive victims of recourse through Title IX processes.

The university has echoed those concerns in the draft of comments to the Department of Education and suggested the department maintain the “severe or pervasive” guidelines.

Additionally, 32 participants at feedback sessions commented on the proposed change in jurisdictional scope for universities with regard to Title IX. Under the proposed guidelines, sexual misconduct that takes place off campus, but may still contribute to a hostile environment on campus, will not be subject to Title IX rules. Individuals expressed concern that graduate students, students living off campus or students in study abroad programs would not have access to Title IX resources.

Students in the Sexual Assault Peer Educators program believe that the new definition of sexual misconduct would create an additional barrier for survivors seeking justice.

“This new definition would challenge the work that we have been doing by allowing perpetrators to go free of consequence through obvious loopholes,” SAPE wrote in an email to The Hoya. “We acknowledge all sexual misconduct as significant and worthy of recognition. We want to stop sexual misconduct altogether, rather than waiting until it becomes “severe enough” for an outsider’s judgment.”

STAIV activists expressed similar worries about the narrower definition of sexual misconduct and implications for off-campus cases in a statement to The Hoya.

“The new definition of sexual misconduct that requires behavior to be ‘severe, pervasive, and objectively offensive’ makes investigating perpetrators more difficult and erases violence that occurs,” STAIV wrote in an email to The Hoya. “Because many Georgetown students study abroad or live in townhouses off-campus, the fact that the new Title IX policy does not include off-campus assaults is also worrying.”

Roles of Advisers and Cross-Examination

The Trump administration’s proposal is also set to change the nature of Title IX hearings and proceedings. Under the current hearing process, questions are submitted in advance to a neutral panel, which then deliberates on which questions to ask and how to frame them. New rules would require live hearings and cross-examination of complainants and respondents. These changes would also expand the roles of advisers to both complainants and respondents. Advisers do not serve as an attorney but can provide legal counsel.

Thirty participants at the university’s feedback sessions did not support live hearings, with some expressing the concern that cross-examination could retraumatize victims of sexual misconduct. Several attendees instead advocated for the current

STAIV argued cross-examination and the obligation to file a formal complaint would “further complicates the process and will discourage reporting.”

SAPE agreed that cross-examination would discourage reporting and highlighted the potential trauma that live questioning may impose on survivors.

“Live cross-examination from the accused would be extremely traumatic for survivors, and unnecessary,” SAPE wrote. “We need to provide a safe space where survivors feel comfortable reporting their experiences, and this would do the opposite.”

The university echoed these concerns in its draft comment to the Department of Education, underscoring the challenge of filing a formal misconduct complaint.

“We already know that the majority of students who experience sexual misconduct never proceed with a formal complaint,” the comment reads. “There is little doubt that the specter of being cross-examined by a trained criminal defense attorney during a school’s grievance procedure would drive down the number of students seeking redress through formal processes even further. ”

Under former President Barack Obama, the Department of Education reinterpreted Title IX as granting authority to the federal government to dictate adjudication procedures for sexual assault allegations in federally funded educational institutions in a guidance document known as the “Dear Colleague” letter.

Forty participants at Georgetown feedback sessions voiced opposition to the proposed change, with the majority of the group in favor of the Obama-era standard. Raising the standard of proof would place a larger burden on the survivor in a proceeding, according to Georgetown’s notes about the feedback session.

The university’s draft comment shared the concerns of feedback session participants, supporting the preponderance of evidence standard and opposing proposals that may encourage a more stringent standard.

“Sexual misconduct cases often involve two people with little extrinsic evidence, which is why many institutions opt to use preponderance of the evidence,” the draft comment reads. “Georgetown uses the preponderance of the evidence standard for sexual misconduct cases and the data show that this standard does not unfairly skew findings in favor of the complainant or respondent.”

Though the university draft comment will be submitted by Jan. 30, the university seeks to extend student participation throughout the rest of the semester through a second sexual assault and misconduct climate survey that will begin Feb. 1.

“It was powerful to see the widespread engagement and dedication to preventing and addressing sexual assault from hundreds of Georgetown community members, and we hope the community remains engaged by encouraging students to participate in the University’s second campus climate survey between February 1 and March 1,” Hill wrote. “This survey is another opportunity for students to provide valuable insights that will shape our continued work on this issue.”