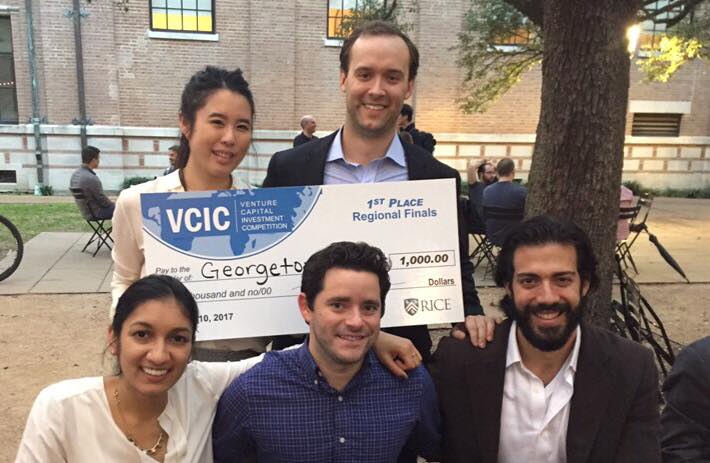 Georgetown’s Venture Capital Investment Competition team is to compete in the VCIC Global Finals after earning first-place honors at the VCIC 2017 South Regional Finals, held at Rice University in Houston, Texas, on Feb. 10.

The team, composed of Chris Cottrell (MBA ’17), Shreya Adiraju (MBA ’17), Sofocles Papas (MBA ’17), Chris Ahern (MBA ’17) and Elaine Cheng (LAW ’18), will now have the opportunity to take on representatives from 12 of the top business schools from all over the world at the upcoming VCIC Global Finals in Chapel Hill, N.C.

In addition, they attended the University of Virginia’s Venture Capital Boot Camp, a program designed to introduce newcomers to the basics of entrepreneurship and investment, in January.

“The basic format is for MBA students to be able to meet other teams. They look at three different companies, evaluate the companies and put together evaluation and a term sheet,” Cottrell said. “They do due diligence and defend their investment decisions to a mock board of venture capitalists to negotiate with the entrepreneur to come to a deal.”

Adiraju highlighted the integration of cases particular to the specific city or region where the competition is held. For instance, some of the cases they assessed in the South Regional Finals pertained to Houston’s oil and gas industry.

According to Adiraju, this added an element of unexpectedness and also led them to learn more about the different places that they travelled to.

“You don’t know what you’re going to get and you have the capacity to learn about regional strength wherever that competition is being held,” Adiraju said. “Another neat part about being in these competitions is being able to go to all of these different places.

In describing the process of training and competing, Cheng equated venture capitalism to family and dating. She said that participants adapted to one another and learned how to cooperate in the tense and stressful atmosphere.

“There are often a lot of parallels of venture capitals, family and dating. Family being your team —  leveraging your strengths: interacting with partners, with the team, coming up with the term sheet,” Cheng said.

Moreover, Cheng said the simulation placed teams in the position of having to build relationships with entrepreneurs, challenging them to manage this lengthy and complex process — much like dating.

“On the dating side, if you think about venture capitalism, it’s very similar to dating because we have a general courtship period where you’re working with a founder to build foundations of trust,” Cheng said.

Cheng also said that the competition  allows them to also get a feel for what is involved for investors in the long run when it comes to managing their assets.

“You move onto a more serious part in the relationship where you’re working on a portfolio for years on end to manage the relationship of growth and achieving the goals of the foundations. Participating in VCIC allowed us to venture into both realms of that process as associates or partners.”

Cheng added that the team is now focused on the global competition and aims to obtain another positive outcome. To do so, Cheng said they will leverage all of their past experiences, as well as the VC Boot Camp’s teachings.

“The global round will be 12 of the top schools who have competed in the pool of over 70 schools around the world,” Cheng said. “We’re going to leverage our past experiences, everything we’ve been working on with Sara, and also, just getting to understand really the flow of the competition.”